The Veneration of the Virgin Mary in the Orthodox Church 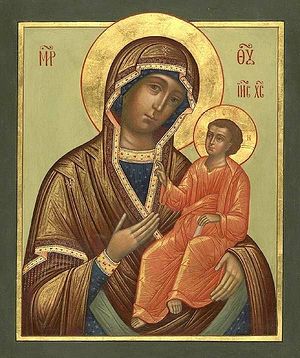 Tikhvin icon of the Mother of God.
Because of recent discussions about the Catholic Church's considering defining a new dogma concerning the Virgin Mary it might be of interest to Christians of other Churches to have some explanation of the Orthodox Church's position concerning her.

The Orthodox Church honors and venerates the Virgin Mary as "more honourable than the Cherubim and more glorious without compare than the Seraphim …" Her name is mentioned in every service, and her intercession before the throne of God is asked. She is given the title of "Theotokos" (Greek for "Birth-giver-of-God), as well as "Mother of God". She has a definite role in Orthodox Christianity, and can in no way be considered an instrument which, once used, was laid aside and forgotten.

Objections to the veneration of the Theotokos are based primarily on what is called "a lack of scriptural evidence to support such a practice." While it is true that the Church depends heavily on her Tradition other than Holy Scripture (Ecumenical Councils, liturgical books, and the writings of the Fathers) for details and the precise definition of the nature of the veneration of the Virgin Mary, there are several passages of the New Testament that really form the basis for our practice.

The angel Gabriel was sent by God to announce to the Virgin the birth of the Saviour: "Hail, full of grace, the Lord is with thee. Blessed art thou among women." (Luke 1:28) This angelic salutation forms a part of the hymn of the Church most frequently sung in her honor. Could we be wrong in repeating the words of the very messenger of God? Elizabeth, the Virgin's cousin, considered it an honor for the Mother of her Lord to visit her. "And whence is this to me that the Mother of my Lord should come to me?" (Luke 1:43) Is there any real difference between saying "Mother of God" and "Mother of the Lord"? Surely, God is the Lord! (Psalm 118:27) In the course of her visit to Elizabeth, the Blessed Virgin spoke the words that form the principal hymn sung in her honor at the Matins service.

My soul doth magnify the Lord, and my spirit hath rejoiced in God my Saviour. For He hath regarded the low estate of His handmaiden, for, behold, from henceforth all generations shall call me blessed." (Luke 1: 47-48)

Elizabeth had already been "filled with the Holy Spirit", precisely that she might cry out: "Blessed art thou among women, and blessed is the fruit of thy womb." (Luke 1:41, 42) This honor given the Theotokos by her cousin is exactly what all generations of the Church do when they call her blessed. Finally, when Jesus saw His mother and the disciple John standing by the cross, He entrusted him with her care, but He also established a new spiritual relationship between them in saying to the disciple: "Behold thy Mother!" (John 19:27) What possible significance could this declaration of our Lord have except to make His Mother the Mother of all Christians? If she really had other children would she be in need of an outsider's home?

The Incarnation of God was foretold in the Old Testament. A race was chosen for a specific purpose: to produce a holy humanity from which God could take flesh. Mary is the one who, in the Lord's words, "heard the word of God and kept it." (Luke 11:28) Through her personal sinlessness she fulfilled all the hopes and prophecies of Israel. She figured greatly in the very prophecies, the most important of which is that of Isaiah: "Behold, a virgin shall conceive, and bear a son, and shall call his name Emmanuel." (Isaiah 7:14) The Church has always considered the following as prefigures or symbols of the role of the Theotokos in the Divine plan, and appoints them to be read on the eves of three of the feasts dedicated to her memory. The first is the story of Jacob's ladder, which refers to her being the means by which God chose to enter into the world physically. "He saw in his sleep a ladder standing upon the earth, and the top thereof touching heaven, the angels also of God ascending and descending by it". (Genesis 28:12) Then from the Prophecy of Ezekiel are the words concerning her perpetual virginity: "And the Lord said unto me: This gate shall be shut, it shall not be opened, and no man shall pass through it; because the Lord God of Israel hath entered in by it, and it shall be shut." (Ezekiel 44:2) The same is true of the burning bush seen by Moses: Mary contained in her womb the God-man, Jesus Christ, the God who is a consuming fire, and was not consumed.

The consequences of denying the Theotokos a part in the life of Christians are more serious than one may think in view of all its implications. Orthodox theology insists upon the two perfect natures of our Lord Jesus Christ; He was perfect God and perfect Man. The Virgin Mary communicated the humanity of the Incarnate God. The redemption of the human race was possible through the union of God and man in Christ. De-emphasis of the sinlessness of Christ's Mother, insistence upon her having other children by Joseph (which cannot be demonstrated by the New Testament), and failure to remember her part in the history of the salvation of mankind have contributed to a general misunderstanding in some churches of the Incarnation in all its fullness and power. Very closely related to the above-mentioned things is the denial of the virgin birth of Christ, a rather popular feature of present-day liberal theology. After the virgin birth, the next basic teaching under attack is the divinity of Christ, and His resurrection, and with that, the Holy Trinity Itself.

The Virgin Mary in the Orthodox view is not regarded as a mediatrix or co-redemptress. She is an intercessor for us, and the content of prayer addressed to her is a request for her intercession. The Orthodox concept of the Church is the basic reason for the invocation of the Theotokos and all the saints. The Militant Church on earth and the Victorious Church in heaven are intimately bound together in love. If it is proper for one sinner to ask another sinner to pray for him, how much more fitting it must be to ask the saints already glorified and near the throne of God to pray for us. Surely, they know something of what goes on here, for else how could there be rejoicing in heaven over the conversion of one sinner? (Luke 15:10) The saints in heaven are equals of the angels (Luke 20:36), who are used by God in the accomplishment of His purpose (Acts 12:7)

There is scriptural evidence to support the traditional Orthodox attitude toward the Virgin Mary and the saints. The other equally valid parts of Tradition also afford abundant evidence of its soundness and importance.

Yemariam Amha1/28/2021 10:04 pm
Amen Amen Amen!!! May Praise be to the God of Saint Mary our Lady, The Father, The Son and The Holy Spirit!!! Now and for ever and ever!!! Saint Mary, most Blessed among the Blessed, Purest among the Pure, and the highest Chosen among all those Chosen is truly full of wonders. May Our Mother and our Lady of perpetual help guide us and lead us up the steps of heaven!!! And, She had absolutely no personal sin, She has always, is, and will be the only truly different creation Who truly Looks like God in all that She does, and has done. The Holy Spirit blessed her from the very beginning, and continues to rest upon all those who truly love, believe in and call her. We Orthodox Christians(I, personally, being an Ethiopian Orthodox Christian) must not listen to any ideas otherwise and continue to believe this miracle with an open heart. In the name of Jesus, Amen.

Larry N Lovelace8/3/2019 7:16 pm
I am Orthodox and we do not teach that Mary was without natural sin as all humans, only Jesus was sinless in this manner, Mary in this life was a human woman, a descendant of Adam , she is now in Heaven interceding for us.

Michael Petek7/29/2019 6:34 pm
There's a distinction that needs to be made between the two meanings of the word "blessed" in Greek. All generations shall call her "happy". But the Holy Spirit speaks of her as He speaks of Jesus. "Eulogemene/eulogemenos" are words by which the Holy Spirit glorifies Jesus and shares with Mary the good pleasure the Father has in His only-begotten Son. "And God saw all that He had made, and indeed it was very good".

Elizabeth had already been "filled with the Holy Spirit", precisely that she might cry out: "Blessed [Eulogemene] art thou among women, and blessed [eulogemenos] is the fruit of thy womb." (Luke 1:41, 42) This honor given the Theotokos by her cousin is exactly what all generations of the Church do when they call her blessed [makaria].

Shoshannah Tempest3/31/2019 3:58 pm
This was wonderfully written in the Spirit of Love...in the Hebrew tradition dating back to the Sumerian culture the aspect of female was very fundemental..in fact this was countered by the Goddess concept carried throughout history..we carry it as Sarah, Rebecca Rachel and Leah and of course the Mother of Hashem. QUEEN OF HEAVEN

Editor8/29/2018 10:11 am
Philipp O.: This article is not sound only from the Protestant point of view. From the Orthodox experience it is very sound. The Virgin Mary was not the mother of James the brother of the Lord. St Joseph was an aged widower when he was betrothed to the Virgin Mary, and had children by a previous marriage. As for Luke 11:28: We do not construe this passage as a negation of Mary's blessedness, but simply an assertion that those who hear the word of God and keep it are blessed. Protestants have a tendency to chop up the Scripture and interpret passages separately, but the Orthodox take the Scripture as a whole. Our understanding is based on 2 millennia of Scriptural experience and exegesis.

Philipp Omotayo8/27/2018 2:33 pm
This is not sound. Firstly, the different greetings that were used to address Mary do not necessarily mean that one should venerate Mary. She is special among people, because Christ was born from her, but that does not necessitate her veneration.
Secondly, St. James has been regarded as 'Brother of Our Lord' by tradition. Does this refer to his extended family? Otherwise, Mary can not have been a perpetual virgin.
Most importantly, the author twisted Scripture in Luke 11:28: Christ explicitly denied that it is his mother that should be considered blessed, but all those that follow his commandments. She should only be called blessed, hence, to the extent she follows his teachings.

Is this a valid argument? I'm in a debate and need to know if my argument is sound.

theophilos4/3/2016 7:37 am
How could Mary be without personal sin?
When the spirit overshadowed her, her womb became clean in order to bring Christ into the world. Yet she wondered with His brothers (i.e half brothers or cousins)whether He was crazy. As such she must have had personal sin, but the grace given her as the holy spirit overshadowed and cleanse her was enough to bring about Jesus.

Thomas Garrett3/10/2013 11:52 pm
Very beautiful and very true! Glory to The Father, The Son, and The Holy Spirit both now and ever unto ages of ages!