The Holy Infants of Bethlehem 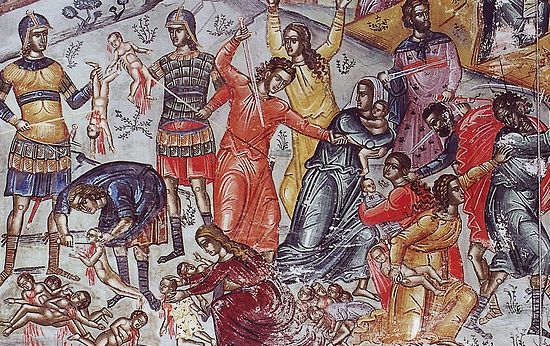 When King Herod realized that he had been deceived by the magi who did not show him where to find the newborn Savior and King, in his rage he ordered his soldiers to kill all male children up to two years of age living in and around Bethlehem. The king was very troubled about the appearance on earth of a Child Whose birth was preceded by such unusual signs, and to Whom such illustrious men had hastened from afar. Herod thought that this Child would become a threat to his rule, and that is why he did not hesitate to condemn so many innocent souls to death, as long as he could kill the Christ Child. The king commanded that all children[1] born from the time that the star of Bethlehem appeared be killed, for he had learned about the star from the magi.

Thus did the terrible prophecy of Jeremiah come true for the mothers of the generations of Benjamin: “A voice is heard in Ramah, weeping and great mourning, Rachel weeping for her children and refusing to be comforted, because they are no more” (Mt. 2:18). Rachael’s grave is in Bethlehem, and she seemed to rise from it that very day to share the sorrow and tears of those mothers. Their sons had died for Christ and in place of Christ, and became the seed and flower of all martyrs to come.

Nevertheless, Herod had attempted to go against God’s Providence. Righteous Joseph, who had been forewarned by the angel, set off with the Virgin Mary and her Child to Egypt. The murder of the infants would be one of Herod’s last crimes.

When King Herod planned to murder of his own son, Antipater,[2] whom he suspected of treason, he was suddenly taken with very strange disease. Many of his contemporaries saw God’s punishment in this—his body was consumed by some invisible inner fire, and began to rot gradually from within until it became like a rotting corpse filled with worms. But even as he stood at the threshold of eternal damnation, the tyrant did not cease to inspire terror with his wicked deeds, commanding that all his opponents be tortured, and preparing a for the execution of his own son.

[1] In the Western Christian tradition they are called the Holy Innocents. Their number, probably an exaggeration, is more likely symbolic and matches the 144,000 chosen ones of St. John’s Revelations (see Rev. 7:4).