Homily on the Circumcision of the Lord 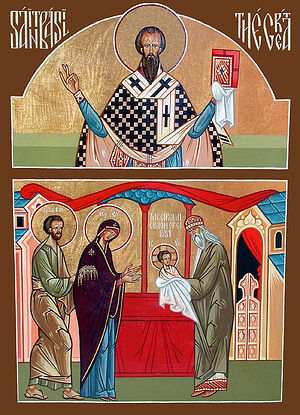 Icon of the Cirumcision of the Lord. Above is depicted St. Basil the Great, who is also commemorated this day. According to the Law of Moses, the law given by the Lord Himself to Abraham, anyone who wanted to be a member of the Israelite nation, the chosen people of God, had to subject himself to a particularly bloody operation. This applied to anyone of the male sex. They were given what was called circumcision. This sign of circumcision remained with them for the rest of their lives. It was a reminder that this man is a member of the Israelite nation.

But almost everything that took place in the Old Testament was but a shadow prefiguring the subject that was just about to come. The Old Testament spoke all the time about the coming New Testament. Much that took place in the Old Testament at times clearly, at times obscurely, pointed to the events that should take place with the coming of our Lord and Savior Jesus Christ, and after His coming. So, bodily circumcision served as a sign of the new circumcision of the New Testament—no longer bodily but spiritual circumcision. What is this spiritual circumcision? The Lord Jesus Christ said many times, Whosoever will follow after Me, that is, after the Lord Jesus Christ to the Kingdom of Heaven, to the glory of God, must deny himself, and take up his cross, and follow Me. This denial of oneself is that very spiritual circumcision. But what does it mean to deny yourself? It means to deny sin, which has so penetrated the soul and body of every person, that denying it is equally hard as denying one’s own self.

Man is filled with all manner of passions, which have eaten in to him like a cancer—sickness eats away at a person’s body, grows at the body’s expense, and only a serious and painful operation can save him. So also does sin have to be operated on, cut away, so that the person might remain healthy.

Because without the circumcision that happened in the Old Testament on the eighth day after a male child was born, he could not enter the society of the chosen people; neither can a Christian enter the Kingdom of God without spiritual circumcision.

We must always, everyday, even every minute perform this spiritual operation on ourselves. I will give you a number of examples to show how we can perform this spiritual operation on ourselves. A man sits down at the table and his appetite is aroused, and even though he is already full he continues to stuff his stomach, drinks if he can, and in the end he is changed from a human into some sort of animal. The situation is even worse when it comes to various fleshly, lustful sensations and desires. It is the same for other sins also.

A person should admit these sicknesses of his and as if cut them off, refrain from gluttony, from drunkenness, from fornication—he should cut them off of himself. The majority of the time, however, a person is unable to do this himself, because he has become a slave to sin, a slave of the devil, who always clings onto every sin and enflames him, touching his nerves and body so that, for example, he might gorge himself to such an extent that he suffers grievously from it later.

Here is another example. The thought comes to go somewhere on a Church feast day. Obviously if a person goes somewhere—to his neighbor’s or some other place, he will without fail get into a conversation, start judging and condemning others, and he might even get drunk—and so on. And if he was in church that day and received some grace and spiritual upliftment, he loses it all after going visiting and takes on a demonic frame of mind.

Therefore a person should cut off all these sinful thoughts, desires, and intentions at the very onset. Six days shalt thou labour, and do all thy work, says the Lord, But the seventh day is the sabbath of the Lord thy God. Therefore try not to go anywhere on that day; stay at home, read the Word of God, rise and pray if you have the opportunity and the situation allows, or just pray silently, preserve the spiritual disposition that you received in church and do not run off somewhere for idle talk, do not judge, or anything else like that.

So, we have prayed and then left the church, but what do we do as we are walking down the street? We look: there’s so-and-so, he’s coming from such-and-such a place; we glance at someone’s nose, at a face—who has a pretty one? and we might even peek into a window. Thus, by the time a person arrives home he has already committed a thousand sins. We have to cut off and circumcise those thoughts that distract us, and make us look, hear, and see what we should not.

And what about envy, lies, deceit, vainglory, and everything else! How many sins have grabbed and clung onto us, becoming as if part of us; and only with great pain, with great effort, calling on God for help: “Lord Jesus Christ, Son of God, have mercy on me,” only with prayer, force of effort and violence can we cut them off.

That is why the Gospels often state that the Kingdom of God suffereth violence, and the violent take it by force. A person must always be in an attentive state, crying, “Lord have mercy”. What does it mean to say, “Lord have Mercy”? It means to be vigilant; that is, to watch after oneself, to war with everything sinful—not only in deed but also in word, thought, and feeling, to cut them off of. We can’t do it by ourselves—we can’t deal with the larger part of it because we are so immersed in sins. So you have to call upon the name of God: “Lord Jesus Christ, Son of God, help me.” One should do this all his life, from his youth to his dying day, watching himself every day, every minute, not giving reign to his eyes or ears, and especially not to his tongue, or to any other urges; and no daydreaming. You should turn away everything bad from yourself, cut it off and destroy it with the aid that comes from calling upon the name of God, the name of the Lord Jesus Christ.

I greatly regret to say that seemingly reasonable people, people distinguished in the eyes of many, do not understand what I am talking about.

Someone thinks that if she goes to church sometimes, reads akathists or the Psalter at home, and fulfills all her domestic duties, she has done everything needed and there is no one better than she. If she even makes a prostration or two here and there or reads the midnight office, well, there is no one above her. She judges everyone and does not see that she is filled with all the different sins, that she has not warred with them all her life, did not watch after herself, did not cleanse herself, or work on this. Therefore she remains full of sins: gluttony, drunkenness, fornication, all kinds of impurities, envy, pride, judging, idle talk, hatred, enmity, and remembrance of wrongs. Often a person who is filled with all sorts of sins, abominations, a person disgusting to the Lord, considers himself to be righteous because he goes to church and reads the Psalter and akathists occasionally. But is that the whole point? Akathists, church services, prayers, and fasting are all giving to man to help him circumcise himself, to take up his cross and struggle with sin.

And the Lord helps in this, sending aid in the form of involuntary sorrows. A person cannot, for example overcome gluttony, or drunkenness, or fornication—so the Lord sends him illnesses. A person is proud and vainglorious—and the Lord humiliates him before all and he becomes the lowest in everyone’s sight. If a Christian is attached to earthly things and all his powers, all his desires and dreams are directed at acquiring worldly prosperity by any means, righteous or unrighteous, by thievery or deceit, then the Lord takes away from him everything he has. Thus, the Lord sends involuntarily sorrows to supplement our own efforts to struggle with sin and aid us in the struggle. The cross of every Christian is built from this endless struggle with sin and those involuntary sorrows.

If a Christian really understands his own calling and the meaning of sorrows, he will carry his cross without murmuring or complaining. But if he does not understand this he begins to murmur, to judge the Lord Himself, saying, “Why does the Lord send me sorrows, sicknesses, and all of those things? Am I any worse than anyone else?” and he remains outside the Kingdom of God.

Also in the Gospels—do you see that the Lord continually talks about how we should be vigilant, watch after ourselves, carry our cross of struggle with sin and endurance of sorrows, and to deny ourselves. If the Lord Himself was crucified on the cross for our sake, became the Lamb of God Who takes away the sins of the world; if He suffered for us, then we Christians should carry our little crosses and suffer a bit in our struggle with sin for our own purification, to make ourselves worthy to enter—not just any place there is on earth—but into the very Kingdom of God, into communion with the Lord, and to become the children of God. But in order to do this we have to labor, to love the Lord, to thank Him, and to beg Him to help us cleanse ourselves from our sins; beg Him to give us the strength to carry our cross to the end of our lives. And just as the Lord descended from the cross to the grave and then resurrected, so must we go from the cross to the grave in order to go the Lord and eternal resurrection. We should thus deny ourselves, cut off from ourselves every sin for the entire course of our lives, and carry without murmuring, with thankfulness, our cross which the Lord has placed upon us. We should beg Him to help us lead a Christian life, to have a Christian death, and to inherit the Kingdom of God that has been prepared for all true followers of Christ from the foundation of the world, where all shine as the sun with the inexpressible joy of Divine Light.