Homily of His Emience Laurus (Skurla + 2008), Metropolitan of Eastern America & New York, For the Sunday after Theophany 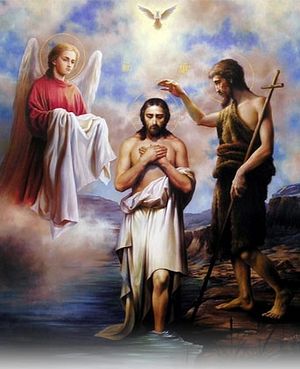 Dear brethren and sisters, today we are gathered here to glorify in prayer the great feast of Theophany.

This Sunday, in the liturgical language of the Church, is called the Sunday after the Enlightenment.

Some of us probably know that in antiquity, and even today in the liturgical books, the feast of the Theophany of the Lord is referred to as the Day of the Enlightenment.

If we carefully investigate and delve with you into the hymns of these recent days, we would have to direct our attention to the fact that these hymns speak to us of the appearance of our Lord Jesus Christ at the Jordan for baptism.

In the kontakion of the feast we sing, "Thou hast appeared today to the whole world, and Thy light, O Lord, hath been signed upon us who hymn Thee with understanding. Thou hast come, Thou hast appeared, the Light unapproachable."

With the appearance of the Lord in the Jordan, the splendor of salvation shone upon humanity. The Lord preached among the people for three years, preparing them for the coming of the kingdom of God. But the people only marveled at His miracles; they did not accept Him; and in the end they crucified Him.

Yet the Lord arose, and after His resurrection He ascended into the heavens and sent the Holy Spirit down upon His disciples; and He founded the Holy Church and bestowed upon it all the gifts that conduce to life and piety.

The first Mystery is Holy Baptism, through which we enter into the Holy Church. Through the Mystery of Baptism we are enlightened, we become members of the kingdom of Christ.

Early in the Christian era, on the Eve of Theophany the baptism of catechumens was performed, and it took place in baptisteries; but for the faithful in church the prophecies of the Holy Scriptures concerning the baptism of the Lord were read. These readings are even now read in church on the even of Theophany, the 13th of January. There are thirteen of them.

When the baptism of the catechumens was completed, they were led into the church and greeted with the hymn, "As many of you as have been baptized into Christ have put on Christ."

Thus it is that, because, on the eve of Theophany, the catechumens were enlightened with the light of the Faith of Christ, the feast of Theophany, now as in ages past, is called the Day of Enlightenment.

During these holy days may the Lord enlighten us also with the light of His grace, and may we turn to the Lord more frequently with the words of the prayer with which the priest concludes every Matins service: "O Christ, Thou true Light, Who enlightenest and illuminest every man who cometh into the world, may the light of Thy countenance be signed upon us, that therein we may behold the unapproachable Light; and direct our steps to the doing of Thy commandments, through the supplications of Thine all-pure Mother and of all Thy saints. Amen."

The Official site of the Russian Orthodox Church Abroad