We don’t have a free press. Discuss. 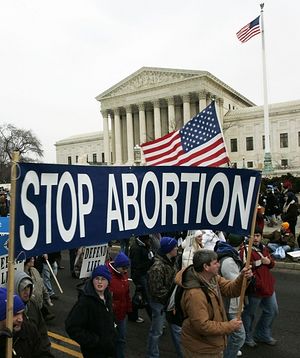 Photo: catholiclane.com
With the headline “Stupid Press, Stupid People: Non-Reporting the March for Life,” you know Anthony Esolen has something to say:

Our founders believed that a free press was essential for a free society. We believe we have a free press. But what good is nominal freedom—the government does not censor our newspapers—if the writers are liars, or are ill-educated, or feed the populace a lot of claptrap, or ignore important events because they don’t like the people involved or the cause? What happens, if the “teaching” of three hundred million Americans is in the hands of people who give headlines to a football player with a fictional girlfriend, or to the sleazy habits of a porn girl turned celebrity, or to “scientific” studies about when your “relationship” is going to end, rather than to anything of substance, anything that requires learning, listening, investigating, and thought? What happens, particularly, if the only stories about faith come from the category, “Benighted Believers”?

What happens is what we got for non-reportage on this year’s March for Life in Washington.

The issue he raises in the first paragraph is something that’s been on my mind a lot lately. I’d be the first to point out that it’s easy to blame the media. At least a large part of the blame lies with the people who care more about fictional girlfriends than global concerns. But it’s also true that our media have problems with accurately conveying information and have strong biases that affect their coverage. What’s worse is is that I think that many know this and just don’t care. We have a media that is content to go after some people, certainly (my prayers go with you if you’re a conservative woman in any field, for instance) but don’t seem that interested in how corporate interests helped write, say, Obamacare or all other pieces of legislation. They’ll go after you with the fury of a firestorm if you decide you don’t want to fund an abortion business any more but they don’t seem terribly interested in said abortion businesses. (Did you see much coverage of this riveting documentary out just last week about the abortion doctor who is charged with eight homicides?) They’ll go after you if you don’t share their doctrinal approach to sexuality. But if you do, you’re probably going to be just fine. And on and on. This is not speaking truth to power or being properly adversarial. And is it a truly free press? I think Esolen asks a good question. 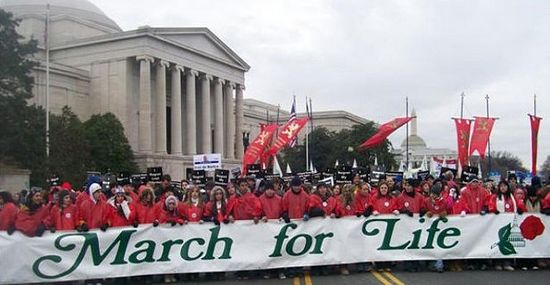 The piece, published at Crisis isn’t just about the big-picture problems with how the media portray the abortion debate. He also brings it down the story level, fisking an Associated Press report on the recent March for Life. Let’s go ahead and look at it:

But the Ministries of Truth mostly ignored it. What they didn’t ignore, they belittled or distorted. In doing so, however, they revealed their own ignorance. Here is the AP story, in News-speak, with my comments in brackets:

[That’s a lie, right there. If 650 people show up at a town meeting, and the reporter says that “several” people showed up, that reporter is a liar, and should be fired. If 6,500 people show up at the State House to protest a bill, and the reporter says that “dozens” showed up, he’s a liar, and should be fired. If a crowd fills the Rose Bowl, and the reporter calls them “hundreds,” he should be fired. The March for Life is, year after year, the largest peaceful assembly of people in the nation. To know this, and to fail to report it, is to be a liar. Not to know this is to be a moron; no third possibility exists. Meanwhile, a gun control protest was held in the same place a few days later, and “thousands” were reported to have taken part in it, when the actual number was about 1,000. The two stories together show an exaggeration of 50,000 to 65,000 percent, in favor of what the reporter favors.]

marched through Washington to the steps of the U.S. Supreme Court on Friday to protest the landmark decision that legalized abortion.

[Ignorance on display. Abortion was legal in many states before the decision. The Court struck down every state law that placed some restrictions upon it.]

The annual event took on added significance for many in the crowd since it coincided with the 40th anniversary of Roe v. Wade, the Supreme Court decision that created a constitutional right to abortion in some circumstances.

[Another lie. “Some circumstances”? Exactly which have been ruled out? The decision made abortion on demand the law of the whole nation. But the writer is too inattentive or too dumb to notice that he’s given the ballgame away. For the Court can, in justice, only recognize a constitutional right. This Court created one.]

I’m going to stop here and quibble with this last part. I think it’s good that the reporter wrote “created” and I don’t think we can know the reporter’s motivation or reasoning for it. I think we can simply acknowledge that this was a proper word choice without making it personal. I will say, though, that it brings to mind something from that David Shaw investigation from the Los Angeles Times:

The major media paid no attention to the discovery by Bob Woodward of the Washington Post that two justices who had played a major role in the 1973 Roe v. Wade decision legalizing abortion had conceded, in private memos, that they knew they were “legislating policy and exceeding (the court’s) authority as the interpreter, not the maker of law,” as Woodward wrote.

I might also point out that this confusion about what Roe (and its companion decision Doe v. Bolton) is so widespread that it’s good to link to some resource explaining just how radical their decisions were. Media ignorance on what Roe, etc., legally accomplished is widespread and must be corrected.

And even as Obama [sic] this week reaffirmed his commitment to “reproductive freedom,” state legislatures continue to consider varied [sic] restrictions on a woman’s ability [sic; ability is not the issue; permissibility is] to receive an abortion.[sic; “May I present you, Tina, with this lovely abortion?]

This language problem has gotten out of control. All attempts to protect unborn children are rephrased as “restrictive” while all attempts to permit their killing for any reason (including for being the wrong sex) are about “protecting” women. This is an egregious bias against unborn children. Earlier in his critique he pointed out that pro-lifers are referred to as restricting “abortion rights” when they don’t believe that there even is a right to kill an unborn child. Obviously this is tricky territory. Whether or not governments have the natural right to dehumanize one subset of the population — be they slaves, the disabled, the unborn or the wrong ethnic group — if the law says you have the right to kill them, how do you phrase such a dispute in neutral terms? I’m not sure the current terminology is helpful and I’d love your thoughts on how it could be improved in a manner fair to all sides.

Esolen goes on to discuss how the report portrayed those who were in attendance, picking out someone who protests at abortion clinics but neglecting to mention the huge numbers of young people or the diversity of the crowd or movement. The only arguments provided in the AP report, interestingly enough, are proof-texts from the Bible — even though that fails to capture the religious diversity of the crowd as well.

And since all reporters like to talk about rape and abortion this year, it was curious that they missed one of the highlighted speakers — a product of rape whose mother did not kill him.

The irony is that it is easier than ever to do the job of a reporter, yet we rely on a couple of paragraphs of gabble and mendacity from a couple of wire services, and that’s it. A free people require a free press. What sort of people settle for a stupid press?

Well, it’s true. A free people do require a free press. That’s why this is so important. Is our press free when it fails so miserably, year after year, to cover a major human rights movement? I think it’s obvious that some people are getting more than a little fed up with a press that is only adversarial toward the benighted believers (however the press choose to define that group). What will happen next? Will the press reflect on and correct these problems? Will things get worse? And how bad is this for civil society?