Homily on the 32nd Sunday after Pentecost. On Zacchaeus 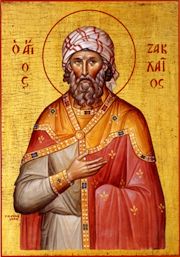 The Apostle Zacchaeus.
Beloved brethren! These merciful words that we hear today in the Gospel are spoken by God become man about the sinner whom God’s righteous judgment had pronounced lost, but who was sought out by the power and grace of redemption, and numbered by it among the saved.

The sinner, Zacchaeus, was a publican with seniority over other publicans. He possessed significant wealth, as the Gospels relate, hinting about the way he obtained that wealth. “Publicans” were what they called tax collectors. It was tempting money! The sparkle of gold and silver charms the eyes of Adam’s descendants infected with sinfulness, and where money passes from hand to hand, abuse almost inevitably creeps in. Publicans were for the most part prone to extortion. When extortion becomes a passion it allows itself all manner of coercion and oppression against one’s neighbor. Then the passion of deceit and hypocrisy comes to the aid of the passion of extortion. From this combination comes the tendency towards captiousness, latching onto every trifle under the pretext of relentlessly fulfilling the laws, inventing guilt for the guiltless, exerting every effort to create an appearance of justness to conceal this inhuman oppression and cruelty against one’s neighbors. Because of this behavior publicans were horrible to the people, and held in contempt by moral people. Zacchaeus was a chief publican; his abuses were greater than those of his underlings. There is a reason why the Gospels point out that he was rich! He became rich unrighteously—his sin was extortion. His soul’s illness was filthy lucre and the mercilessness and lack of compassion that comes from it. Because of his serious sins and criminal disposition of soul, Zacchaeus was called “lost”. Not people’s light-minded, often mistaken condemnation called him lost—God Himself pronounced this judgment upon him. Zacchaeus had become a hardened sinner; in order to amass wealth through abuses one has to do so persistently and for a long time.

The reason for Zacchaeus’s sinful life consists in what is also the reason for the sinful lives of many today: following generally accepted behavior, and either ignorance or merely superficial knowledge of God’s Law. Publicans were usually drawn in by the vice of greed, and so was Zacchaeus. The majority of the Judean population contemporary to Jesus was preoccupied almost exclusively with earthly well-being, striving mainly for material enrichment and worldly success. At that time, the Law of God was most often studied according to the letter. Temple services were performed mostly to satisfy ritual practice, and good deeds were performed superficially and coldly, mostly for the sake of appearances and effect upon public opinion. Zacchaeus was also content with this. He lived like everyone else. Even now you often hear people say, “I live like everyone else.” This is a vain justification, a deceptive consolation! The word of God announces and commands something quite different. Enter ye in, it says, at the strait gate: for wide is the gate, and broad is the way, that leadeth to destruction, and many there be which go in thereat: Because strait is the gate, and narrow is the way, which leadeth unto life, and few there be that find it (Mt. 7:13–14). The strait gate is the scrupulous, conscientious study of God’s Law in the Scriptures and in life; the narrow way is activity wholly directed by the Gospel commandments.

Zacchaeus led an ordinary life at enmity with God and the world, and arranged for himself what worldly wisdom would call a well-to-do situation, not without importance and glamour, yet spiritually he was a lost sinner, already consigned to eternal languishing in the dungeons of hell, while at the same time the Savior of the world was walking the earth within the territory of the twelve tribes of Israel. Zacchaeus was seized by the desire to see the Lord, and he proved the sincerity of his desire with action. The Lord, the seer of hearts accepted his wish, and deigned to visit Zacchaeus in his home. The sinner was enraptured with joy when he saw the Lord coming to him, and the sins became loathsome to the sinner; from love his heart lost its attachment to the fruits of a sinful life and the corruption of riches. Standing before the Lord, the seer of Hearts, Zacchaeus said, Behold, Lord, the half of my goods I give to the poor; and if I have taken any thing from any man by false accusation, I restore him fourfold (Lk. 19:8). In this promise consists the recognition of his sin, repentance, and correction united with great self-denial. Zacchaeus admits his cupidity and resolves to make amends for oppressing his neighbors by rewarding them abundantly. Zacchaeus admits his greed and resolves to cleanse himself, to sanctify his property and his heart with abundant almsgiving. The Lord is quick to accept Zacchaeus’s repentance. The Lord pronounces concerning that sinner who only minutes before was among the ranks of lost outcasts, This day is salvation come to this house, forsomuch as he also is a son of Abraham (Lk. 19:9). Zacchaeus was a descendant of Abraham according to the flesh; only by God’s judgment and only because of his good deeds does he become an adopted son of Abraham. The word house can be understood as Zacchaeus’s soul, into which salvation has come after his repentance, which cleansed his soul from sin. The Lord’s words can also relate to Zacchaeus’s family, who, at the example of their head and with his same self-denial entered, as it often happens, into true knowledge of God and a God-pleasing life.

All who saw that the Lord visited Zacchaeus’s house murmured with indignation, considering it inappropriate and debasing of the Lord to visit such a sinner as society’s common opinion held Zacchaeus to be. Incomprehensible to fleshly minds was and still is the mystery of redemption, which heals all human sins with equal power and ease, both the little and the great, and wrenches sinners from any destroying abyss, no matter how deep that abyss may be. For such an amazing work, faith in a Redeemer and sincere repentance is demanded of a person. The murmurers murmured because they did not understand; they did not understand because God’s work was wrought before their very eyes—a work that is unfathomable to human reason unenlightened by grace. Explaining the unfathomable, and revealing the boundless power of redemption, the Lord said, the Son of man is come to seek and to save that which was lost. Having taken humanity upon Himself, God, whom man neither sought nor called, came out of His own inexpressible goodness to seek and to save the human race, lost because of its alienation from God. He came to seek and to save every person drawn to destruction by sin, if only that person would not reject God, Who seeks and wishes to save him.

The Holy Gospels can be compared to a mirror. Each of us can see, if we so desire, the state of our soul reflected in them, and find that all-powerful healing offered to us by the all-powerful doctor, God. The God-Son calls Himself the Son of man, because He took on human form and lived among human beings, not differing in appearance from them in any way. This is the result of infinite divine love and inexpressible divine humility. The Son of man—we’ll say in the manner of humans—had the right to forgive all of people’s sins as One Who brought Himself, the all-perfect God, as a redeeming sacrifice for mankind; and as the One Who destroyed all human sins, of both little and great significance, at an immense, immeasurably significant, redeeming price. The judgment of the Son of Man over people, as we see in the Gospels, is completely different from that of ordinary human beings, who judge their neighbors out of their own righteousness—a righteousness rejected of God and corrupted by sin. The Savior has justified all sinners who received redemption through repentance and faith—although other people condemned them; and to the contrary, He has condemned all those who have rejected redemption by rejecting repentance and faith—although people considered them righteous, and deserving of respect and reward.

We have seen today in the Gospel mirror a sinner given to the passion of greed, acting out of this passion by unjust tax collection and a multiplicity of offenses against his neighbor. We have seen this sinner, condemned by people, justified by God for his faith and true repentance. This is a consoling, encouraging scene! And as He faithfully promised, the Savior still abides among us; He still heals our souls wounded by sin. And His Divine ordinance has not passed away: The Son of man is come to seek and to save that which was lost. Amen.

Thank you so much for your translations of St. Ignaty and St. Theophan. I came to believe that these are the most valuable saints for us, and Elder Ilia of Optina confirmed this when he came to San Francisco. Someone asked him "what should we read?" to which he answered "St. Ignaty Brianchaninov and St. Theophan the Recluse!".

I look forward to the day when the complete writings of both of these saints are available in English, but you and Mother Nectaria are really helping fill in the gap.