SOURCE: Radio The Voice of Russia

Here is another example of the European double standards: in France the very same politicians who recently admired the Pussy Riot act in the Christ the Savior Cathedral now criticize the Femen activists for their act in the Notre Dame Cathedral. 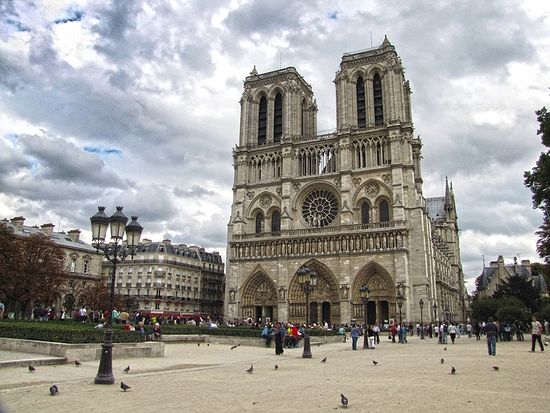 The Notre Dame Cathedral. Photo: Pentristo/Creative.su
New details of the disgraceful act performed in the Notre Dame Cathedral by the topless activists of the Femen movement are coming to light. To remind our readers, by partaking in public nudity inside France’s main cathedral, they marked the resignation of Pope Benedict XVI, who the Femen activists consider to be a homophobe and anti-feminist. It was not just that seven French women and a Ukrainian managed to get inside the cathedral unhindered, undress down to their pantyhose and start clanging the bells with wooden sticks. It turned out that the police only took them to the police station to establish their identity and check their documents. When all of this came to light, the French started saying the same things that they previously disliked hearing in Moscow – for example, suggestions came up that in a mosque for a similar act they would have been hung by their naked breasts. References were made to the XIX century laws that protect cathedrals from desecration. And who is saying all this? Those are the very same French citizens who a few months ago called the Pussy Riot trial an inquisition and called the Russian Orthodox Church a medieval organization. Christine Boutin, who used to work for the government of François Fillon, sees the approach of the apocalypse in what is going on in France. It all came together – the law on same-sex marriages, the resignation of the Pope and the scandal in the country's main cathedral.

“We have now come to a fork in the road. France faces a choice. We are being pulled towards a liberal, or more precisely, libertine philosophy, which was established in France after 1968 and was modeled on the Anglo-Saxon path. According to that philosophy, a human being becomes only a relative value. If this philosophy wins, everything will be destroyed. Those women who take part in such actions, they symbolize this view of a human being, this understanding of his value.”

One would think that the French politicians would just lay back and relax after the successful act of the French Femen. The non-interference of the police reflected what those very politicians demanded of the Russian authorities. The employees of the cathedral escorted the naked women out of the cathedral – the police stood aside. After that the shameless women kept screaming insults addressed to the head of the Catholic Church right on the square in front of the Notre Dame Cathedral made famous by Victor Hugo. Naturally, it all happened in front of a crowd of people and with completely passive presence of the police. It was just like it happened in Russia, minus the naked breasts and absence of the masks. A criminal case has not been opened yet, but similar to Russia, it is due to appear with a delay. Why? Because when the French politicians sensed the smell of Pussy Riot and Femen, for some reason they found that smell from Moscow and Kiev to be completely unacceptable in Paris. Bertrand Delanoe, the Mayor of Paris, criticized the act of Femen and said that it made him sad. Strange as it might seem, but just recently the city council of Paris discussed the issue of giving the participants of Pussy Riot the title of honorary citizens of Paris. Alexander Schipkov, a journalist and a church historian, sees the following logic in this double standards approach of the Paris authorities: the hooliganism that destroys Russia is good, it is democracy. But if the same hooliganism destroys France – it is a completely different matter.

“They don't want to destroy the basis of their state. There is a sense of self-preservation. This sense of self-preservation is activated and they start taking some measures against Femen. In respect to Russia, they also understand that actions of such organizations destroy the foundation, the traditions, morale and all the rest. But this destruction of Russia is in their favor. It is not that they don't understand something, or don't feel how it is perceived in Russia. No, it is all very clear, transparent and without any doubts.”

After Manuel Valls, the French internal minister, expressed his indignation with the actions of the topless hooligans, some legal actions followed. A complaint of the local churchgoers was filed and registered – in the same manner that happened in the “inquisition” process with Pussy Riot. Meanwhile, representatives of the French clergy openly say that the legal case will be taken further only if, according to the French newspaper Le Figaro, “the political will is present from the executive branch, which would consider the previous reaction to be inadequate to the gravity of the damage done”. So this is the end of the fairytales about the division of power told by France, which Russia had to listen to during the entire Pussy Riot legal process. It is interesting that at the same time an investigation is in full swing in Paris concerning a few Catholics who interrupted a show in the Parisian Théâter de la Ville. They are accused of interrupting a performance that included a scene where excrement is laid on the face of Jesus Christ. Those “hooligans” face a 3-year prison term. This is the libertine philosophy in action.