Somewhere I happened to read a line written by Archimandrite Sophrony (Sakharov), “Grace comes to the heart that has suffered.” It seems it was in a letter to Hieromonk Dimitry (Balfour)… And a line by the Apostle Paul was something I didn’t come across by chance—I have read it many times, over and over: For just as we share abundantly in the sufferings of Christ, so also our comfort abounds through Christ (2 Cor. 1:5)… 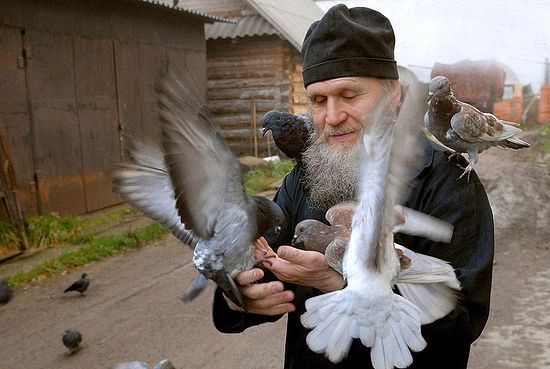 Photo: Archbishop Maximillian of Vologda and Veliki Ustiug.
So, on Saturday at the Vigil Service, during the Polyeleos I was looking at the icon of St. Gregory of Palamas and thought about his amazing life, about the light of Mt. Tabor, the nature of which he so wisely explained and in which he himself abided—being transformed, illumined, “reaching for the heights”. What grace he live in! But then it was as if a spear pierced my heart: How he also suffered!

And not only he, but anyone who with time had become no longer a slave but a friend of God, one of those who pleased Him, and became like unto Him insofar as that is possible for a human being. No matter whom we talk about—martyrs and passion-bearers, holy hierarchs and monastic saints, about righteous women and fools-for-Christ—they all had to suffer. Only they had all different kinds of sufferings—some were physical, others emotional, caused by ill-intentioned people, or sometimes from the demons, hateful and inhuman.

But no one, absolutely no one, as St. Isaac the Syrian said, “has ever ascended to heaven by living coldly.” And from what we have come to know and are still learning, he also testifies that a person is especially looked after by God when the Lord sends him constant sorrows. Abba Isaac also adds that there is no other path to draw closer to Christ other than the path of sorrows.

But what is truly curious is that he writes about all this with joy and not sorrow, in fact celebrating and rejoicing. Well, it cannot be that he did not feel the spear of sorrow wounding his heart! If he had not felt it he would not have written so precisely and wisely about the passions of despondency and despair. I cannot be that that the physical blindness, which forever deprived him of reading the Holy Scriptures and the works of other holy fathers, did not bother him in the least!

And other saints—what didn’t they endure in this life! But if lamentation visited them in the evening, in the morning would follow joy (cf. Ps. 29:6). Joy… Whence did it come? Was it not from the understanding of the truth of which St. Isaac so convincingly speaks? Was it not from the comprehension of it with all their being, the assimilation of it with all their soul? Most likely that is how it is.

So here is another strange thing: we read St. Isaac’s Ascetical Homilies, the Saving Instructions of Abba Dorotheos, the Ladder of Divine Ascent, and especially the New Testament. We supposedly know everything. Then what is the matter? Why don’t sorrows give us joy, but rather make us sad—although we know that they are medicine administered to us by the hand of the most experienced and wise doctor? Why is there such a vast difference between us and the saints? Is it because they are holy, and we are sinful? But after all, they are people just like us in every way, with basically the same “starter kit”, as they say today.

I have had occasion to visit various hospitals numerous times—not spiritual ones, but ordinary, earthly ones. I have seen how some patients were happy to have operations or procedures that could help them, while others were ready to fight with the doctors just to escape the pain, without which any cure would be unthinkable. Well, it seems to me that we differ from the saints in just the same way when we fail at those small things that the Lord allows us to experience. We tear off the bandages, push aside the caring hand, and run away from the hospital somewhere during the night—into the cold, rain, and darkness.

Is it strange that it is so hard for us? The Lord battles for every soul, for every person—He battles with his passions, with the devil, and with the person himself. The saints fought in this battle alongside side the Lord. But all too often, we fight… against Him.

How we wish that this battle would end, how we would like to finally resolve not before anyone—before Him—to capitulate. To accept without murmuring, without any ridiculous, unruly resistance against everything that He has prepared for us, to humble ourselves, and bend our necks under the heavy yoke of sorrows—then suddenly and unexpectedly to us, to feel the joy hidden within them; hidden from them…

Theresa 4/4/2013 8:52 pm
"We supposedly know everything. Then what is the matter? Why don’t sorrows give us joy, but rather make us sad—although we know that they are medicine administered to us by the hand of the most experienced and wise doctor? Why is there such a vast difference between us and the saints?"

This quote struck such a chord with me. It is as if the Spirit inspired a dear friend to send this article to me. It is beautiful.

I struggle, too, with the knowing...the sufferings that are meant to purify us and bring us closer to God but I become despondent, and I am not filled with joy as I should be.

You ask the question above that I stated...but how do we begin? Is it as simple as to *accept without murmuring?*

Thank you for your words of wisdom. I am Roman Catholic but I love the treasures of the Orthodox Faith. Would you recommend the above sources as reading that would assist this soul?
×