Homily on the Sunday of the Veneration of the Cross 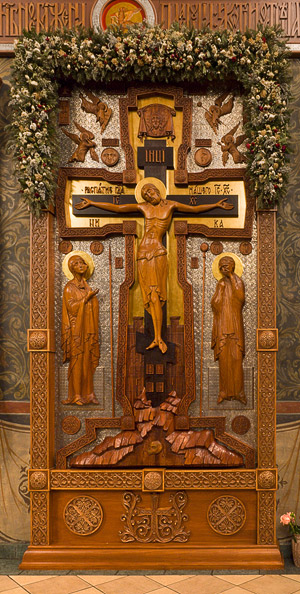 Распятие. Московский Сретенский монастырь. <br>Фото: А.Поспелов / Православие.Ru
The attitude in the Church of God towards the Lord’s Cross sometimes seems unusual and surprising to the world. And since we are in many ways sensual rather than spiritual, we too sometimes share this perplexity with the world. For example, why has the Cross been treated as a special, incomprehensible, but real living power in the Church’s Tradition for two thousand years already? Even now, during Great Lent, we daily pray the following during the divine services: “O Invincible and incomprehensible and divine power of the precious and life-giving Cross, forsake not us sinners.”

And yesterday, at the All-Night Vigil, we heard an astonishing hymn addressing and glorifying it: “Rejoice, life-giving Cross”—addressed the Church to the Cross as a kind of mystical person—“invincible victory of piety, door to Paradise, confirmation of the faithful, rampart set about the Church. Through thee the curse is utterly destroyed, the power of death is swallowed up, and we are raised from earth to heaven: invincible weapon, adversary of demons.” Perhaps this is all exaggeration and hyperbole?

In fact, it is easy to understand the power of the Church’s words about the Holy Cross. One simply needs to grasp one truth.

Why was the Lord Jesus Christ, in saving the human race from eternal death, prepared to endure the greatest labors, undergo suffering and the endless belittling of His Divinity, and ultimately Golgotha and the Cross? Some people say in response to this: because He so loved people. This is doubtlessly the case! Others reply: because He wanted to destroy evil in our world. This, too, is true. Others say: the Lord wanted to return people to the Paradise they had lost. All this is perfectly correct! But this is what Christ Himself says: For I came down from heaven, not to do Mine own will, but the will of Him that sent Me (John 6:38). And prior to His suffering on the Cross, He prayed in Gethsemane: Thy will be done (Matthew 26:42).

The fulfillment of God’s will in our world, regardless of obstacles, difficulties, suffering, and death itself—this is what the cross is in the Church’s understanding.

Of course, these words refer first and foremost to the Lord’s Cross, to Christ the Savior’s fulfillment of His Heavenly Father’s will. The Lord’s Cross is the celebration of the fulfillment of God’s law, God’s will, and God’s commandments. Therefore the Church triumphantly cries out: “Glory to Thy precious Cross and Resurrection, O Lord,” affirming the achievement of the Lord’s Cross, which is great and complete obedience to God’s will and the victory over the ultimate enemy: death.

For us Christians, the cross to which the Savior calls each of His disciples—let him take up his cross, and follow Me (Mark 8:34)—is nothing other than a call to fulfill God’s commandments in all the circumstances in which we find ourselves during the years allotted to us on this earth. Then the cross of each one of us will become a likeness of Christ’s Cross. Then the power that the Savior received from fulfilling the will of the Father shall become our own power as well. Then the Church’s exalted hymnody will be filled with special meaning.

“Rejoice, life-giving Cross, invincible victory of piety!” What kind of victory can a powerless person have over the powerful evil of this world? It can be achieved only by fulfilling God’s commandments, and this victory cannot be overcome by anyone or anything!

“Door to Paradise!” theologizes the Church about the Cross. The Lord opened Paradise to us by fulfilling the Heavenly Father’s will, right up to His suffering on the Cross. But, as Christ teaches, we can enter the Heavenly Kingdom only by fulfilling His will in our life. “Confirmation of the faithful!” What can confirm the faithful’s link with God other than living according to God’s commandments? “Rampart set about the Church!” Our sins weaken the earthly Church, while fulfilling the commandments protects it against penetration by the spirit of the prince of this world. “Through thee” (the Cross) “the curse is utterly destroyed, the power of death is swallowed up!” Only by fulfilling God’s will and His saving commandments can mortal man rise above the laws of decay and death and be “raised from earth to heaven,” as the Church sings. “Invincible weapon, adversary of demons, glory of martyrs, true ornament of holy monks, haven of salvation bestowing on the world great mercy.” All this is granted through the Cross, which is fulfilling God’s will.

Today’s Gospel reading will also become clear and transparent if we bear in mind that our cross is fulfilling Christ’s commandments.

Let us first turn our attention to that which precedes the passage read in today’s Sunday Gospel reading.

And He began to teach them (the disciples), that the Son of man must suffer many things, and be rejected of the elders, and of the chief priests, and scribes, and be killed, and after three days rise again. And He spake that saying openly. And Peter took Him, and began to rebuke Him. But when He had turned about and looked on His disciples, he rebuked Peter, saying, Get thee behind me, Satan; for thou savourest not the things that be of God, but the things that be of men (Mark 8:31-33).

In us, too, the voice of human pity for ourselves, in the first place, and of false pity for others overshadow that which is of God.

And when He had called the people unto Him with His disciples also, He said unto them, Whosoever will come after Me, let him deny himself, and take up his cross, and follow Me (Mark 8:34). This means precisely that a disciple of Christ, in any circumstance of life, should choose that which is of God and not that which is of men; he should crucify himself by following God’s commandments, not slavishly indulging his passions and the demands of this world. This is the very cross that God has given to every one of His disciples that has embarked on the path to the Heavenly Kingdom.

Is this difficult? At first glance, it is unbearably difficult! But let us recall just two people who were connected with our Sretensky Monastery. When Hieromartyr Hilarion (Troitsky) was undergoing suffering and imprisonment on Solovki, he once unhesitatingly rushed in to save a cruel jailer, whom all the prisoners dreaded, when he was drowning in the frozen mush of the ocean. This fulfilled Christ’s commandment to love our enemies. Archimandrite John (Krestiankin), somewhere near here in an inner prison at Lubyanka, jumped up during a confrontation with his accusers to embrace a priest who had betrayed and denounced him. He embraced, with hands disfigured by torture, the very person who had been the cause of his suffering.

This, too, is self-denial and the bearing of one’s cross for the sake of fulfilling God’s commandments. And how many examples of bearing one’s cross do we see in the years-long patience of the sick! And in the patience of those caring for the sick! And in the cross of mothers and fathers who pray with repentance and patience for their prodigal children! You yourselves are familiar with all these examples.

For whosoever will save his life shall lose it; but whosoever shall lose his life for My sake and the gospel’s, the same shall save it (Mark 8:35). To the ancient mind, “life” and “soul” were the same thing. Thus, whoever wants to save and protect his well-being and earthly life at the expense of fulfilling Christ’s commandments will inevitably lose both his temporal life (as does everyone on earth) and his eternal life. But whoever undergoes the suffering that is inevitable in our world—from people, from the devil, from the cruel battle with one’s passions—for the sake of fulfilling Christ’s commandments, or who even loses his very life for the sake of God and the Gospel, shall obtain the Kingdom!

Today, following the Divine Liturgy here in church, we will perform the veneration of the Precious and Life-Giving Cross. Let us remember that the Cross is the image and victory banner of Christ’s incomprehensible accomplishment: the Lord alone achieved victory, in defiance of the entire world, by fulfilling the will of His Heavenly Father. But every Christian cross—both that which we wear around our neck and that which lies before us in the middle of the church—also takes on the image of the accomplishment of the countless host of faithful disciples of Christ. In monastic cells and in prisons, in suffering and in victory, in apostolic preaching around the world and in the modest daily labors of lay strugglers unknown to the world, they have borne their cross of fulfilling God’s commandments in our world that lies in wickedness.

Therefore, the cross emits such power. Therefore, in the middle of the Holy Forty Days, it is brought into the middle of the church so that we, having been strengthened by it, might bear the cross of fulfilling God’s commands along all the paths and in all the circumstances of our earthly pilgrimage.

Today’s Gospel reading concludes with these words: Whosoever therefore shall be ashamed of Me and of My words in this adulterous and sinful generation; of him also shall the Son of man be ashamed, when He cometh in the glory of His Father with the holy angels (Mark 8:38). Christ will be ashamed of those people who, having within themselves the image of the immortal God and possessing the ability to attain His likeness, could not comprehend that to which they were foreordained. They have traded the gifts of God for that which is small and perishable.

Let us never be ashamed to show ourselves to be Christians! And recalling everything that we have thought and spoken about today, as we pass by the church crowned with the cross, let us never neglect the precious opportunity to draw strength from and to venerate all that is holy, great, and live-giving in the saving image of the Lord’s Cross. Amen.