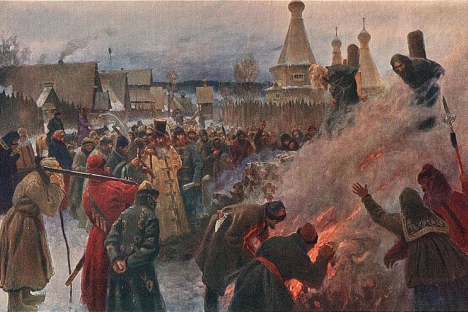 Discovering Russian Orthodoxy: The Old Believers
Russia's religious movement called the Old Believers became well-known in the 17th century when its representatives fled the country. They suffered persecution by the authorities, rejected marriage and church sacraments, were the driving force behind Russian capitalism at the beginning of the 20th century – and they have survived to the present day. They are the people who did not want to accept the new church practices introduced in the 17th century.

The people in Buryatia (a Russian region adjoining Lake Baikal) speak a language similar to Mongolian and follow the Buddhist faith. There are Russian villages here also, and, if you were to visit one during a festival, you would see women in embroidered dresses that are up to 200 years old. Even before you enter the village, the landscape will have changed — pasture and wasteland giving way to wheat fields.

This is the home of the Old Believers, also known as the Semeisky group. At the end of the 17th century, they fled the Schism (reforms in the Russian Orthodox Church) and went to Poland. Then, after part of Poland had been conquered by the Russian Empire, they were exiled to what was then the border with China, in order to develop and defend the region.

The split in the Russian Orthodox Church arose out of Patriarch Nikon’s desire to bring liturgy in line with ancient Byzantine standards, make the priesthood more literate, get rid of long-practiced and redundant rituals and restore the importance of prayer. By the 17th century, Russia had been officially Christian for 600 years.

During this time, numerous mistakes by copiers had crept into the liturgical books. Many priests were illiterate and did not actually understand the words they spoke to their congregations.

Church reform was needed, but the implacability with which Nikon implemented it caused the schism. Many priests and lay people simply could not understand the innovations. Why should Holy Russia — which had survived the onslaught of the Tatars and the Poles and stood the test of suffering — now align itself with Greek scholarship, when the entire Greek clergy at that time was under the power of the Turkish sultans? The dissenters became the Old Believers.

As is often the case in religious wars, the differences between the two sides’ positions were rather wild and unintelligible: should you make the sign of the cross with two fingers or three, or should you spell the name Jesus in Russian “Isus” or “Iisus”?

People were prepared to flee the country, submit to torture, or be burned at the stake, all because a few letters were changed. It became a criminal offence to be a dissenter, and anyone who informed on a dissenter would acquire the property of the condemned.

As well as being persecuted, the dissenters themselves split into a huge number of sects. The main issue was where to find priests. Orthodox priests were supposed to be ordained and part of the hierarchy headed by a bishop or another spiritual figure. For a long time there were no Old Believer bishops and, thus, no one to appoint priests.

Some of the dissenters found a radical solution to this problem by rejecting the clergy and priests altogether (becoming the “Bespopovtsy,” or “priestless” in English). Some appointed for themselves priests who had been ordained by bishops who accepted the reform — many such priests ended up defecting over to the Dissenters’ side. Later the Old Believers managed to create several hierarchies of their own. 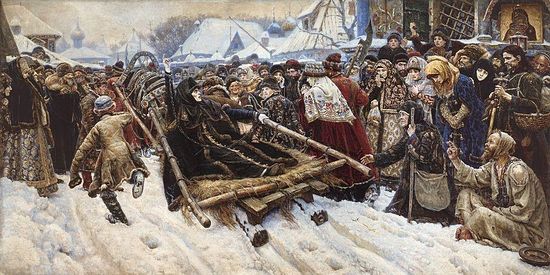 The painting "Boyarynia Morozova" by Vasily Surikov. Feodosia Morozova was one of the best-known partisans of the Old Believer movement. Source: Public domain


The “priestless” Old Believers were also divided on a wide variety of principles — on church sacraments, for example. If there were no priests, there was no one to baptize, bury or marry people. In some priestless groups the functions of priests were fulfilled by respected citizens, as in some Protestant groups. Others simply abandoned certain sacraments — in particular, marriage.

This meant they rejected both marriage and child-bearing, so as not to give birth to children in sin. These groups have existed for centuries, however, casting a certain amount of doubt on their faithfulness to their principles.

The Old Believers were persecuted in Imperial Russia and under the Soviet regime.

The example of the Semeisky group, who were forcibly removed from the area of modern-day Belarus to the shores of Lake Baikal and managed to preserve there a very pure form of the Russian language and the clothing, traditions and songs of the time of Peter the Great, is a case in point. Many fled of their own accord to the Urals, to Siberia, to the borders, and, finally, out of the country.

There are Russian Old Believers communities of various persuasions in Canada, the United States and South America. The geography of their travels is striking. From the Lake Baikal region they fled from Soviet rule into China, where they settled near Harbin — a region that had effectively been a Russian colony before the revolution and became a Russian émigré center after it.

After World War II they were taken to the U.S., and many moved to various parts of South America from there. In the U.S. there are also descendants of Old Believer émigrés who left what is now Belarus and eastern Poland at the end of the 19th century.

The end of the 19th century in Russia was linked with rapid economic growth, and one of the drivers of this growth was Old Believer capitalists — those who had not fled. Mamontov, Morozov, Ryabushinsky, Tretyakov (the art lover, philanthropist and patron who founded the Tretyakov Gallery) — these were the names of Russia’s Rosthchilds and Rockefellers.

There is a temptation here to recall Mark Weber’s book “The Protestant Ethic and the Spirit of Capitalism” and compare the wealth of the Russian Old Believers with the Protestant ideas of righteous acquisition and salvation through work. This mistake is often made. In reality, the difference is very great. Strictly speaking, the Old Believers’ money was not their own.

The various Old Believer communities created a whole parallel economy, gave their fellow-believers favorable, interest-free and even non-repayable loans, and engaged in what would now be called social security and charity.

Old Believer businessmen managed the communities’ assets and passed them off as their own, in order to ease the tax burden and avoid pressure and extortion by the authorities. At the beginning of the 20th century, Old Believer capitalists became seriously involved in politics, while, at the same time, making life easier for the workers in their factories and trying to get reasonable labor legislation passed.

This “social responsibility” was also entirely in the spirit of ancient Orthodox collectivism. In parallel with this, some members of Old Believer financial and industrial clans were flirting with the revolutionaries and providing them with money — mainly in order to put pressure on the czarist government. By the start of the 1917 Revolution, the Old Believers were strong enough to put pressure on the czar.

There are now hundreds of thousands of Old Believers in Russia, but they are running into serious problems. The ones in the most difficult situations are the priestless group: urbanization is undermining their traditional way of life and the transfer of their rules for living from generation to generation; the lack of a clergy and a hierarchy also does not help to preserve their faith. Even in the biggest of the priestless sects (the “Pomortsy”) numbers are falling rapidly.

This is mentioned in a report by Father Ioann Sevastyanov, head of the Pokrovskaya Old Believer Community in Rostov-on-Don. The sects that have their own priesthood have survived much better and are gaining new members.

According to the report, “the Old Believers are gradually breaking out of the ghetto to which they were confined and getting rid of the whole culturological overlay which had masked the Truth they held, and are becoming for a large number of people a representation of the True Church of Christ.”

Tim Egnot6/23/2018 8:24 pm
My grand parents came to the USA from Suwalki, Poland. They were Old Believers and settled in Erie, PA. I've tried to find out if there are any relatives still in that area of the world. Can anyone near there contact me at taegnot@gmail.com to compare histories?

Julia 4/16/2018 10:15 am
Hello I am old believer from Romania, my descendants emigrated from Russia in the 17 th century. Actually, there is the biggest community of old believers in Rumania. They are living in diffrent regions Dobrogea (next to Danube and Blak See) and Moldova ( border with Republic Moldova and Ukraine. Sorry for my mistakes I don't speak well English.

D.7/8/2017 2:53 am
Thank you for publishing this great article. There's more detail here than anywhere I've been able to locate about these interesting and in many ways inspiring people.

Nicolas Laos1/31/2015 3:59 pm
I am in the pleasant position to announce to you the publication of my new book:

"The Metaphysics of World Order: A Synthesis of Philosophy, Theology, and Politics",
Oregon, USA: Pickwick Publications (an imprint of Wipf and Stock Publishers).

I am herewith kindly bringing to your attention a new scholarly essay of mine entitled:

THE SPIRITUAL CHESSBOARD AND
THE PROSPECTS FOR WORLD SOCIETY
A Philosophical, Noopolitical, and Geostrategic Approach

Index:
§ Introduction
§ Classical Greek Philosophy
§ True Being, Eternity, and Time
§ Christianity
§ Hesychasm: The Deification of Man
§ Scholasticism
§ The Doctrinal Innovation of the “Filioque” and the 1054 Schism
§ Modernity
§ The Crisis of Modernity
§ Eschatology, Byzantino-Russianism, and World Society

You can read the entire essay online (printable version) by clicking on the following link:

In case you have any relevant thoughts or comments to share with me, I would be grateful to receive your feedback.

I am a student of history and am currently working on developing thesis ideas (in Russian History), in order to go to graduate school.

Your article is very well written. Would you be able to give me some insight to where your sources came from? I am trying to figure out if there is a connection between the Old Believers and a supposed Pусский пыткам общество that Пётр the Great learned of from a prisoner. извините мое Pусский is still developing.