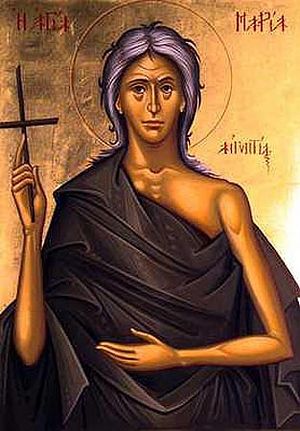 In the Name of the Father, the Son and the Holy Ghost.

We keep today the memory of Saint Mary of Egypt in the gradual progression from glory to glory which Lent is, and which must lead us step by step to facing the supreme glory of the Divine Love crucified, the sacrificial love of the Holy Trinity.

Saint Mary of Egypt was a sinner, someone whose sin was known to everyone and not to God alone; perhaps she was the only one who was least of all aware of it because sin was her life. And yet, one day, she wanted to go and venerate an icon of the Mother of God in a church. The supreme beauty of womanhood in the Mother of God reached her heart, touched it. But when she came to the gate of this church, a power prevented her from crossing the threshold. The Publican had been able to stand there because his heart was broken; Mary of Egypt had no broken heart, and the entrance of the church was forbidden to her. And she stood there, aware that what she was, was incompatible with the holiness of the Presence, the presence of God, the presence of the Mother of God, the presence of all that is holy on earth and in heaven.

And she was so profoundly shaken by this experience that she left all that had been her life, retired into the desert, and with a life which the service books define as ‘extreme’, fought to conquer her flesh, her soul, her memories - everything that was sin, but also everything that could lead her away from God. And we know how glorious her life was, the kind of person she became.

What lesson can we receive from her life? How often is it that we have knocked at the door of God in the way in which Mary tried to come into His presence? How often have we tried to pray, to be in His presence in silence? How often has our longing been to God, and how often have we felt that between our prayer and Him, between our silence and Him, between our longing and Him there was a barrier which we could not pass. We were crying, praying into an empty sky, we were turning towards icons that were silent; all we could perceive was the Divine absence, and an absence so frightening, because not only could we not reach Him, but we perceived that unless we reached Him, our soul was laid waste, there was within us nothing but emptiness, an emptiness that if it continued, if it became our definitive condition would mean more than death - ultimate separation.

But how often also has God knocked at the door of our heart. You remember the word of the Book of Revelation: I stand at Thy door and I knock... How often has God, in the words of the Gospel, in the events of our life, in the weak promptings of our soul, in a whispering of the Holy Spirit, in all the ways in which God tries to reach us - how often has He knocked at this door, and how often have we made sure that this door does not open. Either didn't we simply care to open it because we were busy with things that mattered to us at that moment more than His interrupting, disturbing presence; and how often did we refuse to open the door because the coming of the Lord to us would have meant the end of things which were precious to us, which mattered to us... And the Lord stood knocking, and the door was shut in His face: exactly in the same way in which every door was shut in the face of the Mother of God and Joseph on the night of the Nativity.

We may not be aware of it with the intensity which should be ours; and yet for each of us, simply, the proof of it is that we are here, and millions of other people at some moment have suddenly perceived the presence of God, have heard His knocking, have let perhaps the door ajar, have listened to what He was saying, had a moment of elation, a moment when suddenly we came to life, and then we shut the door again. We chose our aloneness, we chose to be without Him, and what we imagined to be ‘free’ from Him: we are never free; we are never free not because He enslaves us, not because He hunts us down. We are never free because He is ultimately in the end the only supreme longing of our whole being, because He is the fullness of life, the glory of life, the exultation of life for which we long and which we try to glean right, and left in vain.

Mary of Egypt confronted with the Divine absence, with God’s refusal to allow her into His presence, confronted with a shut door within herself felt that unless the door opened, everything was vain. And she turned away from everything that stood between her and God, and life, and fullness, and exultation.

Isn't she for us an example, a call, an image of what could be the life of each of us? But we may say, Yes, this applied to her, she was a prospective saint… Each of us is called to commune with God in such a way, that God and each of us should become one, that each of us should become partaker of the Divine nature, a living member, a brother, a sister, a limb of Christ, a temple of the Holy Spirit, a son and a daughter of the Living God! This is our vocation; but can that be achieved by our own strength? No, it cannot! But it can be achieved by God in us if we only turn to Him with all our mind, all our heart, all our longing, determinably, yes: it is determination, and it is longing, a passionate, desperate longing... And then - and then all things become possible. I have said so often that when Saint Paul asked God for strength to fulfil his mission, the Lord said to him, My grace suffitheth unto thee, My power deploys itself in weakness... And at the end of his life, having fulfilled his vocation, Paul, who knew what he was saying, said, all things are possible unto me in the power of Christ Who sustains me... All things are possible, because God does not call us to more than can be achieved by Him with us and in us.

How much hope, how much inspiration can we find in each of the Saints of God, as frail as we are, and in whom the power, the glory, the victory, the life unfolded itself, deployed itself gloriously.

Let us once more receive inspiration from what we hear, receive inspiration from what we meet face to face in the Gospel, in Holy Communion, in prayer, in the silence in the presence of God. And let us move one step more forward towards the vision of the love of God made manifest in Holy Week, in the last steps of the way of the Cross, in the final victory of crucified Love, and in the victory of the Resurrection of God. Amen.