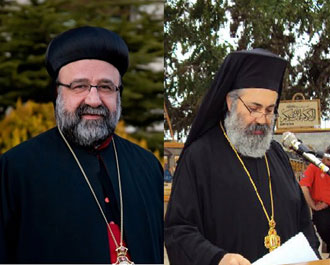 Bishop Matta Khoury, secretary to Syriac Orthodox Patriarch Zakka I Iwas, spoke to al-Joumhouria on behalf of the patriarch, who had just come out of the hospital on the night of the incident. He confirmed, also in his capacity as Bishop of Bab Touma in Damascus, that the Patriarchate will not take any decision while awaiting any contact from the kidnappers, in order to know their intentions and demands.

Khoury states that, "As Christian clergy, we do not fear Syrian Muslims. We have no problem with any Syrian Muslims, whether they are Sunni, Shii, or Alawi. Rather, our problem is with foreign Muslims who come from abroad, Chechens, Taliban, Afghans who want, for example, to fight Russia in our region. " He adds, "We have lived with Syrian Muslims for a long time and we coexist with them in peace. We are brought together by feasts and united by traditions." Khoury emphasizes that "Muslims from all sects have built our patriarchal residence in Bab Touma, decorated it, and carved icons of Saint George for us."

Khoury likewise affirms to al-Joumhouria that his Muslim children who fled from Homs and whom he met in Lebanon confirm to him that "there is no connection between Syrian Muslims and what is happening. They are sorry about what has happened in Homs and are afraid of the foreign groups that have come from abroad." He points out that, "the Syrian Muslim does not constitute a source of fear for the Syrian Christian, as history testifies."

Details of the Kidnapping

Bishop Matta Khoury recounts to al-Joumhouria the details of what happened: After some effort, one of our priests in Aleppo was able to contact us and to confirm the kidnapping of Metropolitans Youhanna Ibrahim and Boulos Yazigi, who were on a humanitarian mission that they had been preparing for a long time, obtaining the release of an Orthodox and a Catholic priest. They were accompanied by a man named Fatuh, who has been Metropolitan Ibrahim's driver for more than five years, and a fourth, unidentified person.

On their way to the specified area to carry out the task which, according to al-Joumhouria's information was ready and approaching its conclusion-- liberating the priests, their car encountered a foreign group.

Khoury reveals that initial information indicates that the kidnappers are Chechens and when they saw that two of those riding in the vehicle were laypeople, they threw them out of the car and fled with Metropolitans Yazigi and Ibrahim in an unknown direction.

Khoury confirms that the fourth, unidentified person is "a close confidant of Metropolitan Yazigi" and he believes that he was playing a fundamental role in the operation to release the priests who had been taken hostage. He reveals that this person and the driver were both thrown onto the road. After several hours, news arrived from Fatuh's family who contacted the Metropolitan's office in Aleppo and informed them that his son had found him murdered and had identified him from distinguishing characteristics. The whereabouts of the fourth person are still not known.

Khoury recounts that, "the agreement to release the hostages required Metropolitan Yazigi to come from Turkey while Metropolitan Ibrahim set out from Aleppo, and that they would meet at an agreed-upon location in order to carry out the operation to liberate the priets."

Khoury, who is responsible for the patriarchal residence in Bab Touma in Damascus and is currently overseeing the Syriac Orthodox Patriarchate, explains that the fourth person confirmed this story and said that the kidnappers' features indicate that they are foreigners. Chechens are distinguished by their accent and coloring (beards, light skin, and blue eyes, in addition to language) and so we deduce it from the information that we have from Metropolitan Yazigi's friend.

Regarding Fatuh's family, Khoury states that they received his body and identified him, emphasizing that "we acknowlege that the kidnappers are not the driver's killers and that, according to the fourth person, they are Chechens. However, we are not sure whether they are really Chechens or whether they belong to another group."

He adds, "We are waiting the kidnappers to contact us, the patriarchate, or the metropolitan's office in Aleppo so that we can know their demands. Our sources confirm that efforts continue to release the two metropolitans and for this reason we have waited to publish a statement and we have not yet contacted the Greek Orthodox patriarchate.

We are calmly working individually, but this does not mean that we do not want to cooperate. Just the opposite, we want each one to work separately because we do not want to make a hasty decision, lest we put the metropolitans' life in danger."

Khoury called for "Waiting for the legal deadline, 24 hours, before holding any wider meeting or making any serious decision." He explains that "We do not possess much information to act upon. Our position as a patriarchate is unenviable position. We live in a state of sorrow, grief, and pain and we are upset by this news, especially Patriarch Zakka Iwas, who left the hospital today and his health is critical. The news startled him and increased his pain."

Khoury emphasizes that, "We have always denounced and continue to denounce attacks on all priests, whether they are of our community or of another community, just as we denounce the death of Muslim clergy because the mission of all clergy is peace and love. Their position with the opposition or the opposite, but rather a purely humanitarian position." Khoury described the metropolitan's office's position as "bound" and we are unable to take any decision or issue any statement because we do not want to subject the metropolitans to danger.

He explains that, "Kidnappers' demands are usually material or with the goal of political pressure, to pressuring the state to arrange an exchange. That is, the kidnappers may have a list of names they want to make an exchange for."

He states that, "The kidnapping will not be easy for Christians in Syria because Metropolitan Yazigi is close to the regime and to the opposition and he has equally good relations with both sides. He has political tact, and whenever he expresses his opinion, his demands are the same as the demands of honorable Syrians: reform and an end to corruption."

Khoury denies that the two metropolitans have enmity for any specific group, "and so we support the possibility that the kidnappers are neither close to the regime nor to the opposition and are not Syrian." He adds, "They could be Afghan or Chechen extremists, Jabhat al-Nusra, Lybians, or Egyptians who have come from abroad.

We do not know who Metropolitan Yazigi was in contact with in order to release the priests. However, it is most likely that he was not in contact with foreigners, but rather the Free Syrian Army. News of their coming may have been leaked or their kidnapping could have happened by chance, since the area is not secure."

Khoury calls for patience, pointing out that the fourth person "was only with difficult able to get to a telephone and communicate with the Greek Orthodox metropolitan's office in Aleppo. If the situation is not resolved tomorrow and the metropolitans return to their homes, we will work on the level of the two patriarchates."

Khoury expresses his sympathy for Patriarch John X Yazigi, who is facing a double problem, for his family and for his church. He states that his heart is large and that he would deal in the same way, whether the person being kidnapped is his brother or any other person from his community.

Khoury warns that "Over-analysis could cause danger for the metropolitans. For this reason we must be patient because each group of kidnappers has its own way of dealing and we do not want recklessness or their being killed."

Khoury closes by saying, "Today is the Feast of Saint George. For the Syriac Patriarchate and bishops, it is a feast for praying that all the kidnapped priests may be freed, especially Metropolitans Yazigi and Ibrahim." He calls on Lebanese in general and especially Christians to "participate in prayer for the intention of their speedy release and the release of the nation's captives."

I hope this email finds you well.

I am one of the founders of a new website called SuryoyoMatch.com. SuryoyoMatch's mission is to strengthen the Syriac Orthodox community by facilitating singles (18-99 years of age) that are parishioners of the Syriac Orthodox Church, world-wide. Our site offers single Syriac members, both men and women, an additional avenue to finding each other locally and around the world. We accomplished this by categorically matching their profiles, and giving them both a fun and FREE method of finding their soul mate online who shares the same beliefs, both religiously and culturally.

Given that our site is FREE for all members, we are asking other Suryoyo websites to help support us by providing a link from their home pages to ours in an effort of informing the Suryoyo community that this resource exists and is available to them.

Thank you in advance, and I do hope to hear from you soon. If you have any questions, please do not hesitate to ask!

Colin McKean4/28/2013 2:35 am
I always attend the Syrian Orthodox cathedral in Aleppo when I visit my muslim friends in the city.I pray daily for an end to the conflict and killing,for our friends in Aleppo and for all the people at the cathedral.Now I am praying for Metropolitan Ibrahim and the Greek Orthodox Archbishop too,for their speedy and safe release and for their families.I hope there will be an end to this terrible conflict as soon as possible,and for a better life for the Syrian people,and restoration of the harmony that existed before.I live in Liverpool in the U.K.