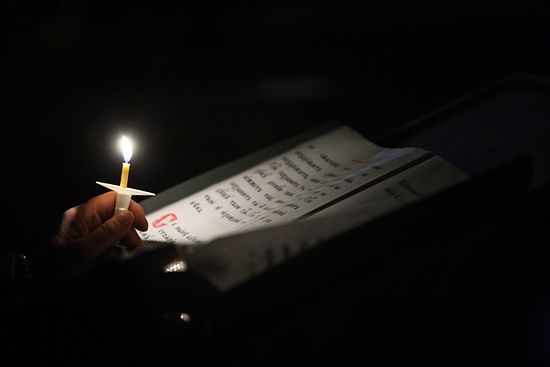 Orthodox Christians around the world celebrate Pascha -- the Resurrection of Jesus Christ -- on May 5 as the culmination of a marathon Holy Week that spans eight days and encompasses 18 distinct services.

Most Americans know the feast as Easter, widely believed to be derived from the name of the Anglo-Saxon dawn goddess Ēostre who may, in turn, have had her origins in the Greek pagan goddess of the dawn Ēōs. However the Orthodox Church and much of the rest of the Christian world uses "Pascha" (Πάσχα), which comes from the Hebrew term for Passover -- Pesach (פֶּסַח) -- the observance of Jews' Exodus from slavery in Egypt. Ancient Christians adopted this term because they saw Jesus' Resurrection as the "New Passover" celebrating humankind's Exodus from slavery to sin and death.

The formula used by Orthodox to determine the date of Pascha has its roots in the First Ecumenical Council, which was convened in 325 A.D. in the city of Nicea. It utilizes the Julian calendar that was in use in the time of Christ. It additionally takes into account the date of the Jewish Passover, but calculates it according to the method used by Jews during Christ's life.

Holy Week is not a celebration of long ago events. It is the reliving of Christ's Passion and Resurrection in the present. The hymns of the week repeatedly use the present tense and the word "today" because Christ's saving Passion and life-giving Resurrection are a present day reality and hope -- not some far away historical. Until the end of Holy Week, the lights are kept low and the entire temple is draped in the purple of mourning. 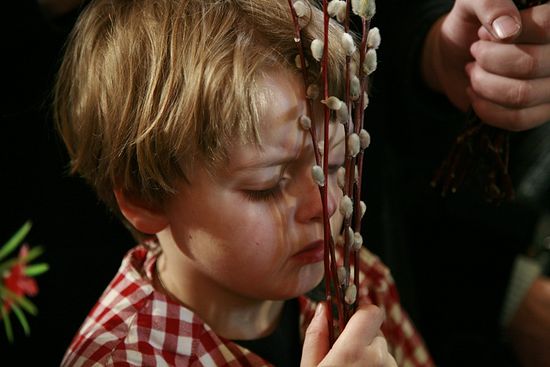 The highlights of Holy Week begin with the Saturday of Lazaros on April 27, a Liturgy which commemorates Jesus' power over death through His raising of His friend Lazaros.

On Palm Sunday, palm crosses are distributed and palms fill churches during a Liturgy that reminds worshippers of Christ's triumphal entry into Jerusalem. That evening begins the celebration of a series of four "Bridegroom" services, which culminate on Holy Wednesday evening and are based on the Parable of the Bridegroom found in Matthew 25. It reminds us that Jesus approached humankind to make Himself one with us, as a bridegroom approaches to become one with his bride.

On Holy Thursday morning commemorates the founding the sacrament of the Holy Eucharist with a Liturgy that evokes the Last Supper, known by Orthodox as the Mystical Supper. A reserved host -- the Body and Blood of Jesus Christ consecrated from leavened bread and wine -- is prepared at this service and is preserved on the altar the whole year as a sign of Christ's real and living presence in His temple. Holy Thursday evening sees a reenactment of Jesus' carrying his cross to Golgotha. Extensive passages of the four Gospels are read during this timeless service while clergy carry an almost full scale cross upon which has on it a representation of Jesus' body.

The service of the Royal Hours is read on Holy Friday morning, chronicling the hours during which Jesus suffered on the Cross. Following this, faithful decorate a carved wooden canopy, representing the tomb of Christ, with a profusion of flowers. Early in the afternoon the relatively brief -- yet deeply moving -- service of the Taking Down from the Cross takes place where the representation of Christ's Body is taken down and placed in a white linen sheet representing His Burial Shroud. A representation of His Body embroidered on velvet is then placed in the tomb for the faithful mourn over and venerate.

Perhaps the single most moving service of the Orthodox ecclesiastical calendar is the candlelit Lamentations before the Tomb celebrated on Holy Friday evening. Christ's Tomb is carried, usually around the outside of the temple, in a funeral procession of the Lord. No one can fail to be moved by this, and the ancient hymn melodies and words, which bring to life the grief and suffering of the Virgin Mary and Jesus' followers.

Holy Saturday dawns with a Liturgy during which clergy scatter bay leaves in the temple as a sign of the incipient power of the coming Resurrection which sweeps away the accumulated detritus of the ages piled up against the Gates of Hell, which Christ's Resurrection blew open once and for all.

Just before midnight on Saturday night, lights are extinguished and the chief celebrant emerges from the altar with a single flame, symbolizing Christ's Resurrection, which is passed to the waiting congregation. All then proceed outside where the Resurrection is proclaimed to the world and the hymn "Christ is Risen" sung, and its words exchanged as a greeting among the faithful. Finally the Agape Vespers, featuring Thomas' encounter with the Risen Lord read in a multitude of languages, is usually celebrated at noon on the Sunday of Pascha. The multiple languages remind all of the universal nature and message of Jesus' Resurrection.

In the end, no description can do justice to the multifaceted journey with Christ that Orthodox Holy Week is. It must be lived.

The Orthodox Church invites all to come and become of part of the drama, the pathos and the immediacy of the ancient series of services that Holy Week represents. 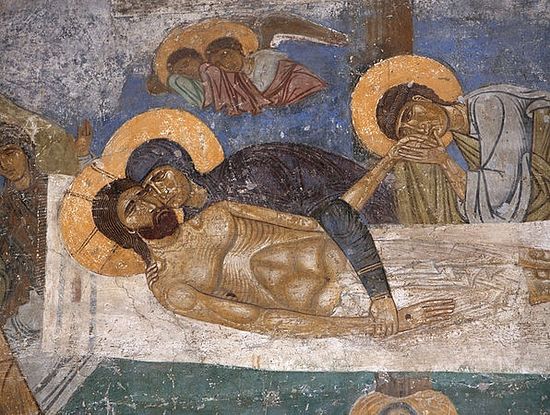 Lamentation of Christ. Fresco from the monastery in Nerezi, Macedonia, XII century