The Orthodox Celebration of Great and Holy Saturday 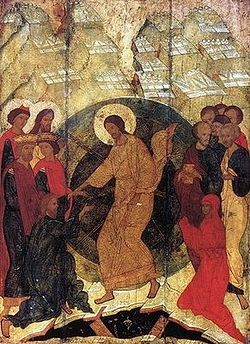 Great and Holy Saturday is the day on which Christ reposed in the tomb. The Church calls this day the Blessed Sabbath. The great Moses mystically foreshadowed this day when he said: God blessed the seventh day. This is the blessed Sabbath. This is the day of rest, on which the only-begotten Son of God rested from all His works. . . . (Vesperal Liturgy of Holy Saturday)

By using this title the Church links Holy Saturday with the creative act of God. In the initial account of creation as found in the Book of Genesis, God made man in His own image and likeness. To be truly himself, man was to live in constant communion with the source and dynamic power of that image: God. Man fell from God. Now Christ, the Son of God through whom all things were created, has come to restore man to communion with God. He thereby completes creation. All things are again as they should be. His mission is consummated. On the Blessed Sabbath He rests from all His works.

Holy Saturday is a neglected day in parish life. Few people attend the Services. Popular piety usually reduces Holy Week to one day - Holy Friday. This day is quickly replaced by another--Easter Sunday. Christ is dead and then suddenly alive. Great sorrow is suddenly replaced by great joy. In such a scheme Holy Saturday is lost.

In the understanding of the Church, sorrow is not replaced by joy; it is transformed into joy. This distinction indicates that it is precisely within death the Christ continues to effect triumph.

TRAMPLING DOWN DEATH BY DEATH

We sing that Christ is ". . . trampling down death by death" in the troparion of Easter. This phrase gives great meaning to Holy Saturday. Christ's repose in the tomb is an "active" repose. He comes in search of His fallen friend, Adam, who represents all men. Not finding him on earth, He descends to the realm' of death, known as Hades in the Old Testament. There He finds him and brings him life once again. This is the victory: the dead are given life. The tomb is no longer a forsaken, lifeless place. By His death Christ tramples down death.

THE ICON OF THE DESCENT INTO HADES

The traditional icon used by the Church on the feast of Easter is an icon of Holy Saturday: the descent of Christ into Hades. It is a painting of theology, for no one has ever seen this event. It depicts Christ, radiant in hues of white and blue, standing on the shattered gates of Hades. With arms outstretched He is joining hands with Adam and all the other Old Testament righteous whom He has found there. He leads them from the kingdom of death. By His death He tramples death.

Today Hades cries out groaning:
I should not have accepted the Man born of Mary. He came and destroyed my power.
He shattered the gates of brass.
As God. He raised the souls I had held captive.
Glory to Thy cross and resurrection, 0 Lord!
(Vesperal Liturgy of Holy Saturday)

The Vespers of Holy Saturday inaugurates the Paschal celebration, for the liturgical cycle of the day always begins in the evening. In the past, this service constituted the first part of the great Paschal vigil during which the catechumens were baptized in the "baptisterion" and led in procession back into the church for participation in their first Divine Liturgy, the Paschal Eucharist. Later, with the number of catechumens increasing, the first baptismal part of the Paschal celebration was disconnected from the liturgy of the Paschal Light and, formed our pre-paschal service: Vespers and the Divine Liturgy of St. Basil the Great which follows it: It still keeps all the marks of the early celebration of Pascha as baptismal feast and that of Baptism as Paschal sacrament (death and resurrection with Jesus Christ - Romans 6). 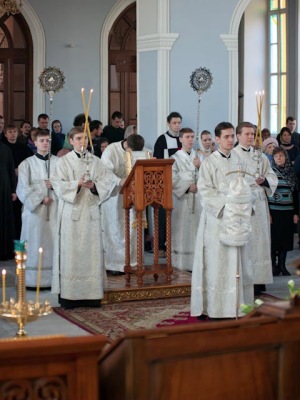 On "Lord I call" the Sunday Resurrectional stichira of tone I are sung, followed by the special stichiras of Holy Saturday, which stress the death of Christ as descent into Hades, the region of death, for its destruction. But the pivotal point of the service occurs after the Entrance, when fifteen lessons from the Old Testament are read, all cen¬tered on the promise of the Resurrection, all glorify¬ing the ultimate Victory of God, prophesied in the victorious Song of Moses after the crossing of the Red Sea ("Let us sing to the Lord for gloriously has He been glorified"), the salvation of Jonah, and that of the three youths in the furnace.

Then the epistle is read, the same epistle that is still read at Baptism (Romans 6:3-11), in which Christ's death and resurrection. become the source of the death in us of the "old man," the resurrection of the new; whose life is in the Risen Lord. During the special verses sung after the epistle, "Arise O God and judge the earth," the dark Lenten vest¬ments are put aside and the clergy vest in the bright white ones, so that when the celebrant appears with the Gospel the light of Resurrection is truly made "visible to us, the "Rejoice" !with which the Risen Christ greeted the women at the grave is experi¬enced as being directed to us.

The Liturgy of St. Basil continues in this white 'and joyful light, revealing the Tomb of Christ as the Life-giving Tomb, introducing us into the ultimate re~lit7 of Christ's Resurrection, communicating His life to us, the children of fallen Adam.

One can and must say that of all services of the Church that are inspiring, meaningful, revealing, this one: the Vespers and Liturgy of St. Basil the Great on the (Great and Holy Saturday is truly the liturgical climax of the Church. If one opens one's heart arid mind to it and accepts its meaning and its 'light, the very truth of Orthodoxy is given by it, the taste and the joy of that new, life which shown forth from the grave.