On the Passion of Christ and the Book of Job

The Old Testament is revealed in the New Testament. The Book of Job reveals its meaning in an amazing way. It is read during the church services during Great Lent. This book prepares us to meet with the Suffering and Risen Christ. 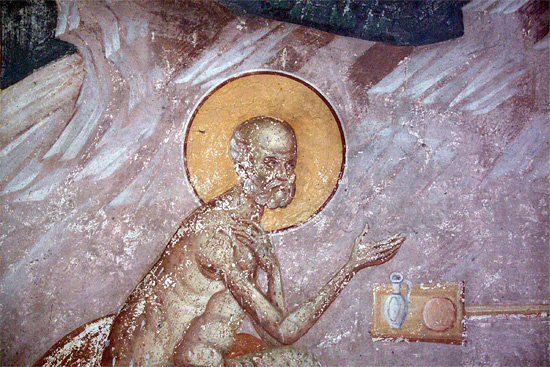 Job on the dung hill.
What does the Old Testament tell us about? It tells us about the interrelationship between God and man, just as do all the other Old Testament books. The Lord rules the world, rewards the righteous, and punishes sinners. However, as we can see from the Book of Job, not every affliction is punishment for sin.

In the holy book we read about how Job experiences onerous torments on the brink of death, and his friends urge him to repent in order to make God’s punishment cease. Job’s friends do not see that he is accepting torments not for his secret sins, or that the instigator of all his suffering is satan, who envies God and hates God’s servants. Job wars with satan. Christ accepts sufferings as does Job—not for himself, not for his iniquities. Christ is crucified for the sins of others.

Job occupied a high position, he was surrounded by respect, and then he loses everything—his children, his health, his property, and lay dying in bitter ostracism from human society beyond the city gates (Gr. Ekathito eni koprias ekso tis poleos, Job 2:8). And when it seems that all is finished, the Lord returned everything to Job that he lost, and prolonged his life for many more years. Our Lord Jesus Christ likewise died beyond the Jerusalem wall. He was resurrected unto eternal life, and gives new life to all who believe in Him.

In the Book of Job, good and evil are engaged in an irreconcilable war. The power of evil shows great might, but the Power of Good shows itself to be almighty. God is omnipotent in the full sense of the word, but His servant Job also finds considerable spiritual strength and defeats satan.

There is a confrontation between God an satan, but this is a confrontation of unequal powers. No matter how strong satan may be, God is stronger. Satan is forced to submit to God against his will; not in everything, but in some things he is forced to submit to God. We know that God is higher than any of the angels; the Creator is higher than any of His creatures.

An argument arises between God and satan over righteous Job: Why does Job remain faithful to God? Is it only because God shows mercy to Job? Will Job continue to bless his fate and his God if some real catastrophe befalls him and no help comes from above?

Satan lost this argument. But who won? God did. But let us not forget that the man of God, Job, also won this argument. He defeated satan and remained with God no matter what happened. 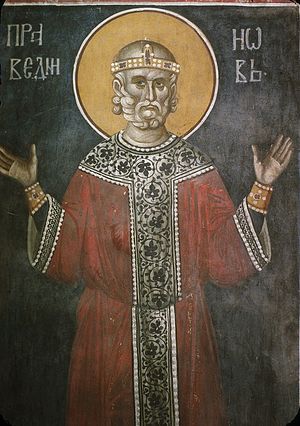 Holy Righteous Job.
From a distance it may appear like this: the masters fight but the servants tremble. God and satan argue, while righteous Job and his family are consigned to cold-blooded destruction. “They waged a bet on Job.” Is that really how it was? No, it is not. Job was not a coin in someone’s gamble. These were not powerful gamblers settling scores, using living people as the means to prove their own supremacy. God does not play with human fate, and He limits satan’s freedom of movement. God does not allow satan to play for his own pleasure. For God, human suffering is not a game; after all, He Himself came to earth and accepted suffering. He stood in the place of a man, a suffering, perishing man at that. Satan attacked Him also, and Christ defeated satan.

Christians recognize the book of the Prophet Jonah as an Old Testament prophecy about Christ. The book of Job is also recognized as such.

Evil powers took up arms against Christ and Job. To make matters worse, “kind people” came forward with their reproaches, their long-winded speeches overflowing with superficial piety. Job’s friends came to him with the intention of consoling a sick man. They see his sorrowful situation with their own eyes and at first keep respectful silence. Then begins the talk of repentance. At first Job’s friends cautiously suggest the thought to him that afflictions come to people for their sins, while a repentant person receives forgiveness from God and those afflictions leave him. By this they call Job to repentance. He rejects their call. Why? With every new speech the reason becomes more apparent. The argument about repentance takes on sharper character. Finally, the masks come off. Behind his friends’ masks can be seen the cruel faces of his judges.

These people came not to console Job, but to judge him. Their calls to repentance differ in no substantial way from some interrogations by the Stalinist NKVD. Often an interrogator from the NKVD would not even bother to come up with an accusation against the arrested, but would simply ask, “Tell us about your criminal acts. Didn’t you do them? Why else are you in prison? By mistake? The NKVD organs make no mistakes; they don’t imprison people for nothing! Tell us what you are guilty of. Go on, don’t waste time! It is in your own interest to make a sincere confession.”

When Job again refuses to name all his secret and great transgressions, his friends begin to threaten him: “It’s very bad for you now. If you don’t confess it will be even worse!” Job continues to refrain from such a confession, which couldn’t be pleasing to God. He confesses painfully that he would like to talk about it with God Himself to ask Him what all these terrible sufferings are for. Then God Himself speaks to Job and reminds him that the Creator is higher than all created things, and that man cannot understand all His designs and actions. Job humbles down before God, with repentance acknowledging the magnificence of God’s designs and the righteousness of God’s actions. God places the period at the end of Job’s argument with his friends. Job is righteous; his friends sinned before him by judging a righteous man—let them now ask Job to pray for them.

This Old Testament story ends with Job’s victory over satan’s schemes, and he receives a blessing from God. But in fact, the story is not over… It continues in the New Testament, when God unites Himself to suffering mankind, lives as a Man, suffers and carries out His great service on earth. He descends into hades and defeats the evil powers, resurrects unto eternal life, and stretches forth His hand to help people who are perishing.

Francis6/17/2021 4:32 am
This post was truly worthwhile to read. I wanted to say thank you for the key points you have pointed out as they are enlightening. <p><a href="http://fatherpeffley.org/">The Passion of Christ In Light of the Holy Shroud of Turin</a></p> was called the greatest relic in Christendom by Pope John Paul II. In fact, the Shroud is the most studied scientific object in the entire world. Thanks, Rev. Francis

allan dart4/16/2020 11:55 am
This reading brings in todays world we need to be more intune with the word and with god and through prayer may god bless you all

Castrese Tipaldi4/2/2018 1:56 pm
Indeed, the only difference is that Christ did not need any reminder, being perfectly aware of all the actions and design of God, revealing thus that he was not merely man, a creature: He knew God since before the world was, He was with God, and He was God.

Jeremiah Sims5/8/2013 4:19 am
Well said, Father Deacon Pavel. It is a good reminder for us regarding a Biblical book often seen as an enigma. I was hoping that you would have given a teaching regarding Elihu, along with chapter 28 on divine wisdom. After all, unlike Job's three 'friends', Elihu's speech was not rebuked by the LORD Adonai from the whirlwind. Could Elihu have represented a type of angelic messenger to point Job toward gaining divine wisdom from his travails? It seems there are parallel lessons in Psalm 90, the prayer of Moses the man of God, who in light of the sins and wrathful troubles of Israel, beseeches the LORD, "So teach us to number our days, that we may apply our hearts unto wisdom" (90:12; KJV). Does Job point us toward gaining divine wisdom as well as toward Christ?
×