On Death and Resurrection in Christ 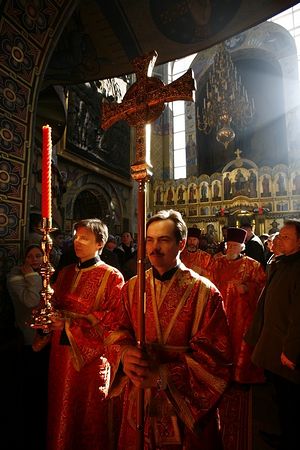 Yesterday I died with Him; today I am made alive with Him.

Yesterday I was buried with Him; today I am raised up with Him.

Let us offer to Him Who suffered and rose again for us ... ourselves, the possession most precious to God and most proper.

Let us become Divine for His sake, since for us He became Man.

He assumed the worse that He might give us the better. He became poor that by His poverty we might become rich. He accepted the form of a servant that we might win back our freedom.

Let us give all, offer all, to Him who gave Himself a Ransom and Reconciliation for us.

A few drops of Blood recreate the whole of creation!

Steve Calascione 5/5/2013 4:56 pm
As Lossky writes on the teaching of St Maximus, Christ the cosmic Adam, in his ascension, presents to the Father the totality of the universe restored in Him, by uniting the created with the uncreated (p. 137). In the theology of St. Symeon, we experience this as divine grace manifested inwardly by the Holy Spirit:

"[Who] is the sovereign unction resting upon the Christ and upon all the Christians called to reign with Him in the age to come. It is then that this divine Person, now unknown, not having His image in another Hypostasis, will manifest Himself in deified persons: for the multitude of the saints will be His image".