“Who am I to have my image painted,” asked St Seraphim of Sarov, “The image of God and the saints are depicted, we are but sinful people.” And it was only in deference to his followers that he allowed his portrait to be painted.

There Was No End to Their Joy 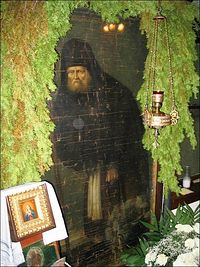 Some forty miles from the busy commercial center of New York, next to the town of Nanuet, is the convent of Novo Diveevo, a monastery known throughout Orthodox America. Here is an original portrait of St Seraphim of Sarov, painted during his lifetime. He is depicted as a very old man, leaning on a staff, prayer beads in the other hand, his face bright, with unforgettable eyes. People who have seen this portrait say that his gaze seems to pass right through their soul, illuminating its dark corners.

One cannot be indifferent to the warmth and kindness the portrait exudes. Hunched slightly from the burden of many years, his numerous cares and prayers, the elder looks upon mankind today, gazing at Orthodox Christians living across the ocean.

When St Seraphim of Sarov was canonized in Diveevo Convent, the last Russian Emperor and his family prayed before his image. During the years of destruction of Diveevo, this portrait was taken to Kiev, then to Pokrov Church in Podolsk.

In 1943, the portrait was miraculously saved and brought to the city of Lodz, then given to Protopriest Adrian (Rimarenko), the Rector of Berlin’s Resurrection Cathedral. During the terrible bombardment of that city, the image was again miraculously left unharmed. Parishioners returning after the night-time bombings saw that an incendiary bomb had crashed through the dome and fallen into the area which contained the portrait.

A plashchanitsa [burial shroud] and this painting, which lay atop it, were burning, together with a series of icons of Saints Gury, Samon and Aviv. The fire was quickly extinguished, and the faithful saw that neither the plashchanitsa nor the likeness of St Seraphim were damaged, though everything else in the area burned. There was no end to their joy!

The founder of Novo Diveevo Conent in America, Fr Adrian, was a student of the last two elders of Optina—Anatoly the Younger and Nektary.

In 1930, Fr Adrian was imprisoned. His flock prayed for him day and night. When batiushka was summoned by the prosecutor for questioning, which no one ever emerged from alive, the prosecutor himself was suddenly arrested. A miracle!

By the end of the war, Fr Adrian and his flock made their way to America, and this miraculous image joined them. Life in the New World was very difficult. There was no money, there was no place to conduct divine services, there was no place to live, and it was nothing but the fervent prayers before this image that gave them hope that everything would be alright. And then a miracle happened. 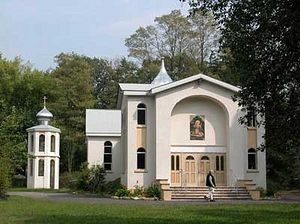 An abandoned property belonging to a Catholic monastery was being offered for sale in the town of Spring Valley. The offer included a stipulation that the property preserve its sacred purpose by a new owner. An Orthodox convent fulfilled this requirement, but the Orthodox did not yet have even the small sum needed for the purchase. Once again the prayers of the Orthodox brothers and sisters did not go unheard. A Mr KN Maleev, an elderly bachelor who was in need of care, who lived in America for many years, donated half the money. He found the attention he needed at the convent. A bank provided the rest in the form of a loan. And so with God’s help and with the tireless prayers of Fr Adrian and the believers, the convent acquired its own land, and construction began on Novo-Diveevo Convent.

A Catholic church was on the property, refurbished for Orthodox services, and dedicated to the Dormition of the Most-Holy Mother of God. In a few years, the church was no longer able to accommodate all the worshipers. They decided to build another church dedicated to St Seraphim of Sarov.

The convent came to flourish in the 1970’s. There were some 50 nuns and novices at the time. They had all arrived in Novo-Diveevo from various places—many of them came from China, including today’s Abbess Irene.

Despite the fact that the number of nuns has shrunk to ten, the convent continues as an important spiritual center for Orthodox America. As always, divine services are conducted here, there is a senior home here, and many people make pilgrimages here. On a visit to the convent today, one can pray before the same miracle-working image of St Seraphim in Dormition Church.

The Church of St Seraphim also contains a Vladimir Icon of the Mother of God from Optina Hermitage—a gift from SS Anatoly and Nektary of Optina to the city of Kiev, and also a cross from Ipatiev House in Ekaterinburg where the Royal Family was martyred.

The Russian Cemetery in America 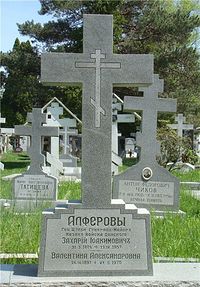 Novo Diveevo contains the largest Russian Orthodox cemetery in America. There are over 7,000 people buried here . One can learn a great deal about the Russian diaspora from the plaques on the grave markers: Alexandra Tolstoy, the youngest daughter of the great author; Grand Duchess Vera Konstantinovna, niece of the last Emperor; Alexander Pavlovich Rodzianko, Lieutenant General of the White Army in the Russian northwest; Olga Mikhailovna and Elena Petrovna Wrangel, widow and daughter of Baron Wrangel; Princess Maria Wolkonsky; Prince Michael Dolgoruky.

Time moves inexorably forward, people change, epochs shift. One thing remains constant, the image of St Seraphim of Sarov protects and supports all those who turn to him, either in the Homeland or across the ocean.

Website of the Russian Orthodox Church Outside of Russia

ava6/18/2015 4:39 pm
This is a very nice article.
My aunt has lived at Novo Diveevo for many years.
We should help them there with some fundraising drive at one point, they don't have much money it seems

There is also a very nice Priest, Father Kyril Riggs at Spring Valley St. John the Baptist
He needs funds to create a website for his church and to attract more Orthodox or others who are interested
Why is there not a centralized "help" group to both try to help parishes and convents and also to advocate for Orthodox people and Christians generally, as in the Middle East massacres currently going on ?