Sunday of the Myrrh-Bearing Women

Christ is Risen!
Dear Brothers and Sisters in the Lord!

Today is dedicated to the Holy Myrrh-Bearing Women. This is a great feast day for everyone, but especially for women, Christian women, who like the Myrrh-Bearers sacrifice their time and labor and resources, that is, all they have, for the good of the Church and their neighbor. 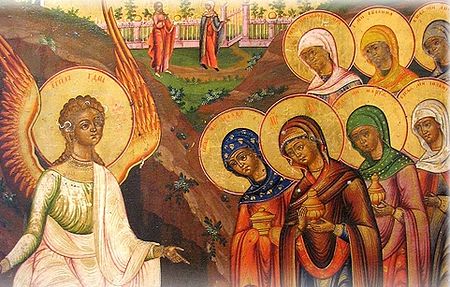 With all my heart I wish such women to continue their holy service to Christ. May they not be frustrated when they hear the words “myrrh-bearers” spoken by some with condescension. The calling of the myrrh-bearers is sacred. It was established by our Lord Jesus Christ Himself.

Before Pascha, you heard the Gospel reading in which the Lord, not long before His suffering and death, visited the home of Simon the Leper in Bethany. One woman, filled with great love and gratitude to the Savior, brought a vessel of valuable oil and poured it onto the head and feet of the Savior, wiping them with her hair. The house was filled with its aroma. But the aroma of this love was interrupted by the stench of the greedy Judas. He was upset that the vessel of this valuable myrrh was broken and poured out onto the Savior’s head and feet, and not donated to the needy. Judas condemned the woman, but the Lord justified her: “For ye have the poor always with you; but me ye have not always. For in that she hath poured this ointment on my body, she did it for my burial. Verily I say unto you, wheresoever this gospel shall be preached in the whole world, there shall also this, that this woman hath done, be told for a memorial of her" (Matthew 26:11-13).

In today’s Gospel, which speaks of the burial and Resurrection of Jesus Christ, we hear of the Myrrh-Bearing Women. When Joseph and Nicodemos buried Christ, these women were ever-present. Who were they? Mary Magdalene, Salome, the daughter of Joseph the Betrothed, Joanna, wife of Chuza, steward of Herod Antipas, Martha and Maria, sisters of Lazarus, Susanna and others. They were all there at the Cross of the Savior, and followed Him on the Way of the Cross. With them, too, was the Mother of God.

Among them, especially zealous in her service to Christ, was Mary Magdalene. This was a sinful woman who had been possessed by seven demons, that is, she suffered from the seven mortal sins. Upon meeting Christ, Mary was healed. When she saw the Savior, she fell to Him with faith and received healing from Him. Since then, she served Him with all her soul, believed and loved Him, possessing, as it were, the two opposite virtues of the sisters of Lazarus, Martha and Maria: the practicality and service of Martha and the lofty spirituality and prayerful nature of Maria. She proved her devotion to Christ upon His Crucifixion, when she and the Mother of God did not depart from the Cross. The Apostles, all men, fled, but Mary Magdalene and the Myrrh-Bearing Women stood not far from the Cross, beheld the Savior and co-suffered with Him, and saw how He was laid in the tomb.

Mary Magdalene was deemed worthy not only to see the angel who appeared to the other Myrrh-Bearers, but to see the Savior Himself. When she remained at the tomb in tears, she was the first to behold the Risen Christ. Recognizing Him by His voice, when He called her by her name, “Mary” (John 20:16), she fell to His feet. Then Christ sends her to report of His Resurrection to His disciples. This joyous news was preached by Mary everywhere she went, until her very death as a martyr.

She had no fear of Emperor Tiberius, whom she approached with a red egg as a symbol of the Resurrection and Redemption by the Blood of the Savior. Mary Magdalene told the emperor of the illegitimate condemnation of Pilate over Christ the Savior. The emperor, examining and satisfying himself of the truth of her words, exiled Pilate. For her special zeal in preaching the Gospel, the Holy Church calls St Mary Magdalene “Equal-to-the-Apostles.”

What example do the Holy Myrrh-Bearing Women show us? How Mary Magdalene stood at the Holy Sepulcher from early morning until late at night, just as we must, brothers and sisters, dedicate to God not only the beginning and ending of each day of our lives, but our very lives. For sooner or later the grave awaits us. Just as all the Holy Women served the Lord, often leaving their homes and housework, their husbands and children, so must we serve Christ, Who is as close to us as He was to the Myrrh-Bearers. For Christ did say: “I am with you always, even unto the end of the world” (Matthew 26:20). Christ, my brothers and sisters, is with us in the Holy Mysteries, especially in the Mystery of the Eucharist. In church we are with Him, too, always. “My house shall be called the house of prayer” (Matthew 21:13).

That is why you men must not hinder your wives from serving the Church of Christ, and through the Church, in the name of Christ, Who, yesterday and today and for all of time, tends to the poor and sick. Through this service to Christ, your wives and daughters, just like the Myrrh-Bearing Women, bring peace and grace to your hearts and your homes. Today, in memory of the Holy Myrrh-Bearing Women, it is the duty of the pastor of the Church not only to remind women of their duties, but to thank them for all that they do. And what is that? Those who live far from the Church could pose this question.

The Church, brothers and sisters, is the body of Christ, all the member organs of which are in constant contact, endlessly acting and living, and the life of the Church is a vineyard demanding constant care and cultivation. This is how women who hold the Myrrh-Bearers as their ideal cultivate the vineyard.

When Christ was born and the shepherds came to worship the Divine Infant, they hear angelic singing! Blessed are the women who take the gift the Lord gave them to the Church, and just like angels praise the Lord in church singing, gaining great pleasure themselves and bringing great joy to the worshipers. Blessed are the women who as members of their parish sisterhood voluntarily and with self-sacrifice take on the noble duty of tending to the good order and adornment of the temple, who care for its vestments, who organize trapeza feasts, tend to the poor, etc. What joy, for instance, have the sisters of our little church here bring to us when on Holy Pascha they provided the white vestments to the clergymen and even the altar boys! This was no mean feat, and their labors, on top of their daily tasks at home, must be appreciated.

Even if not all women can be constant members of the sisterhood and help with their duties, they can help in preparing for the great feast days of Pascha and Christmas, the parish feast day, when all sorts of menial tasks accumulate in tending to the church and its decoration. I noticed once with sadness when this glorious but onerous task was assumed by elderly women, while the younger women of the parish probably stayed home to watch television or otherwise amuse themselves.

Thanks to all those women who help in so many ways. Be bold, those of you who hold Christ in your hearts, to continue to serve Him and help your neighbor, as the Holy Myrrh-Bearing Women did. Do not live for yourselves alone. This would not only be egotistical, but wasteful, empty and pointless! Amen.

Pamela Maodus5/13/2019 3:59 pm
Loved the article. Was very informative as well as passionate about the women in Jesus life. Mothers give life and should be given praise. Women like Mary Magdeline who was not a mother was still a very important woman in Jesus life. He saved her and she was dedicated to him on the highest level. Thanks for sharing this.
×