Sunday of the Samaritan Woman

Source: The Entrance of the Theotokos Skete

In the Name of the Father, Son, and Holy Spirit. Amen.

Not only did our Lord Jesus Christ teach large crowds—for example, at the Sermon on the Mount—but he also spent time with individuals, in one-on-one situations. The Gospel for this Sunday, the account of the Woman at the Well, the Samaritan Woman, is one example of this, and a very interesting one it is.

The Lord and His followers had come to the city of Sychar in Samaria, near Mount Gerizim, which is about forty miles north of Jerusalem. They stopped at Jacob’s Well, a site venerated by Jews and Christians to this day because the spring here was contained in a cistern created by the Old Testament Patriarch Jacob.

This well was in the news back in the early 80’s, when Jewish zealots broke into the Orthodox chapel over the site and savagely murdered the monk guardian there, who is now regarded as a genuine martyr for the faith—St. Philemon of Jacob’s Well. (When we were in Jerusalem we venerated his incorrupt body at the chapel of the seminary of the Patriarchate of the Patriarchate of Jerusalem.) 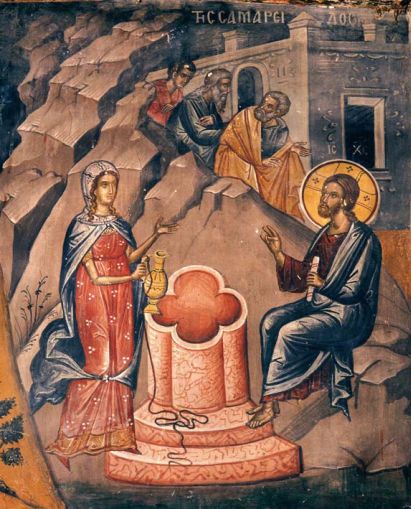 It was evening and the Savior, in His human nature, was tired, hungry, and thirsty and sat down at the well. His followers went into the town to see what they could find for a communal meal with the Lord, and at this moment a woman arrived to draw water and the Lord asked her for a drink. There are two important points to make here: first, she was a Samaritan, and the Samaritans were a sect, regarded as heretics by the Jews. In fact there was a saying among the Jews: “May I never set eyes on a Samaritan!” Observant Jews would actually close their eyes when a Samaritan approached.

Secondly, a pious Jewish man would not enter into conversation with a woman in public, not even if she was related to Him. Further, as most of us have heard, an observant Jewish man, even in our time, begins the day with a prayer thanking God for not making him a woman.

So, here we see Christ, the Messiah, the Son of God, immediately breaking two of the laws that were binding on the Jews. This woman—whose name, by the way, was Photini—was taken aback and challenged Christ in a tone of voice that said, “Who do you think you are, you, a Jew, speaking to me?” And He responded: “If you knew the gift of God, and who it is that says to you, Give me to drink; you would have asked of Him, and he would have given you living water.”

Now, “living water” is an interesting term. The Savior meant a“water” that gives life. There is a considerable amount of important information packed into this. First, the Lord speaks of a free gift, something you can’t earn. Then, He makes it clear that He is the only one who can give this gift. And the gift itself life—that is, eternal life and union with God for those who are otherwise dead in sin, as this woman was.

The effect of these words had an immediate effect and she quickly changed tone in which she was talking to Him. Suddenly He was a “somebody” to her. So she initiated a theological conversation with Him, asking if, since He claimed to give “living water,” He is greater than the Patriarch Jacob, at whose well they are conversing. The Lord saw that she did not yet understand and explained to her that anyone who drinks of the water He can give, will never by thirsty again. At this, the woman immediately asked for this “water.”

We all remember—and we heard again in the reading this morning—that Jesus now moved to gently expose her sins to her—and these sins were many and serious. Needless to say, this was even more startling to the woman. Their conversation continued, but we don’t have time to touch on all of the other important elements of this encounter today, except to recall that the Woman at the Well finally said that she knew the Messiah is coming, and when He comes,” she says, “He will teach us everything.”

We must pause here for a moment to note that the Samaritan woman clearly believes that a Messiah is coming but has not yet arrived; that this Messiah was not an abstract idea but a real person and a teacher, not a military conqueror.

One writer has observed that she seemed to have a clearer understanding of Christ than even some of His weak-kneed and weak-minded disciples did!
Not long ago a bright Protestant theologian made this observation: “If the Samaritans could discern the coming of the Messiah and subsequently identify Christ as the fulfillment [of the Old Testament prophecies], what does that say about the Jews [then and today]”?

And then the Lord Jesus Christ quietly said to the woman, who has just acknowledged that the Messiah will come, “I,” He proclaims, “I, the very one speaking to you, am He.”

Now this is only one of several times in the Gospels when Christ speaks in this very distinct and recognizable way—recognizable to the Jews, who knew their Scripture. When the Lord says to her, “I am He”, He uses the Greek from the Book of Exodus (3:14) where the Lord God reveals His personal name, “I AM.”

As I said, this Gospel account is so rich that it cannot be fully and exhaustively explored in just one sermon. As an Orthodox priest once said, “we could speak for days and not exhaust the story of the conversion of Saint Photini, Equal to the Apostles, the Samaritan Woman.”

The Holy Fathers of the Church tell us that, safely tucked away in this remarkable encounter, like a nugget, is a story about how we may obtain the Holy Spirit—for, the Fathers explain, this woman of Samaria did indeed receive the Holy Spirit.

In both Scripture and the Fathers, the Holy Spirit is referred to as both water and, sometimes, fire. As water—for example in Holy Baptism—the Holy Spirit washes the sinner clean. When the Spirit is described as fire, it reminds us that fire burns sin away and also warms a person. In the conversation at Jacob’s Well, the Lord chose to use the image of the Holy Spirit as Living Water.

And how does this apply to us?

In order for us to have the Holy Spirit fully and completely living in us, in our hearts and souls, we must change. We must not shrink away or hide when Christ puts Himself on our path, directly in front of us, which happens more often than we think or will admit. Instead, we must be like the Samaritan Woman, and eagerly ask for and receive the Holy Spirit, this Living Water.

To “change” means to become something other than what we are right now, at the present moment. It means admitting that we can’t go on like this. But this can only happen if we choose to cooperate with the Holy Spirit in this saving work, for, as we are now, we have changed very little or not at all from what we perhaps were, say, a year ago, and this lack of ongoing change could well keep us out of the Kingdom of Heaven unless we wake up and pay attention.

Remember, Christ will not always continue to confront us, placing Himself on our path, in front of us. There will come a time when, if we continue to disdain Him, He will stop trying to make “contact” by revealing Himself. And then there will be no change, and the Living Water of the Holy Spirit will not fill us up, and we will be lost. This is Orthodox Christianity, as anyone knows who has read St. Seraphim of Sarov’s famous conversation with Motovilov about the acquisition of the Holy Spirit. (And even if we have read it, I suggest reading it again, as preparation for the coming Feast of Pentecost and the descent of the Holy Spirit upon the Church.)

For us Orthodox Christians, this is our way of life.

This is what it’s all about. But if this is our way of life, why is it that we do, and say, and think so many things that are clearly NOT part of this saving way of life? This is the question that I want to ask.

We all of us received Baptism and Chrismation, and in these Holy Mysteries, we received the potential for all the gifts of the Holy Spirit and the washing away of sins. For some, we were but wee babes when this mystical event occurred. Others of us were already full-grown, but we received the same potential as those who came on to the saving Ark of Orthodoxy as infants. At some point in our lives, however, whether we are cradle Orthodox or converts, we had an experience with meeting Christ. Perhaps it was very subtle and fleeting, perhaps it was much more than that. But it happened, and it was real. But when we encountered the Lord, did we change? Again, that is the question with which I want to leave us all this morning.

Fr. Seraphim of Platina is famous for telling all of his spiritual children, “It’s later than you think!” And he was right. But I say to all of you this morning here at this humble Skete, gathered for the Divine Liturgy, “It’s still not TOO late for us!” But only if we begin now, today, and do not postpone it one single day longer.

The Lord is here, in the Mystery of the Eucharist. He is here as surely as when He walked upon the earth 2 thousand years ago. And through the power and authority of the priesthood, He will shortly descend and enter into the Holy Gifts, the Bread and the Wine. This is done when the priest calls upon the Holy Spirit to complete this mystical action. Therefore, whether you thought about it or not, whether you like it or not, the Lord is right here on your path, right before each and every one of us, once again, through the agency of the Holy Spirit.

Brothers and sisters, may we eagerly listen to Him, like the Samaritan Woman at the Well, and ask the Holy Spirit for the strength to change!

In the name of the Father, Son, and Holy Spirit. Amen.