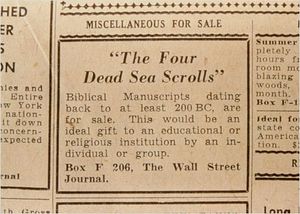 What Were The Dead Sea Scrolls Doing In Worcester ?

I might have been able to resist this particular trip in the wayback machine, were it not for the address I noticed in the Tax Court decision. One of the parties in the case, The Archbishop Samuel Trust, was located at 9 Piedmont Street in Worcester, Mass. The two trustees were the eponymous Archbishop Athanasius Y. Samuel, a Metropolitan and Archbishop of the Syriac Orthodox Church of Antioch and Charles Manoog who ran a plumbing supply business at the same location.

Mr. Manoog’s son Russell, would also locate the American Sanitary Plumbing Museum there (It has since moved. To Watertown. Where else ?) I drove by there frequently (On my way from swimming at the Main South YMCA, I should add quickly) and would always notice the large sign warning that AIDS and hepatitis were not under control in the Piedmont neighborhood. The sign was also the work of Russell Manoog, who according to his sonCharlie, did not like the fact that his business neighborhood had become the go-to place for Worcester street prostitution. Neighborhood boosters eventually persuaded him to change the sign to “Welcome to the Piedmont Area a concerned and caring neighborhood”. Why nobody thought of “Piedmont Area – Temporary Home Of The Dead Sea Scrolls” remains a mystery.

If you have read anything about the Dead Sea Scrolls you probably know that the initial scrolls were found by Bedouin herders. A trader in one of the bazaars was a Syriac Orthodox Christian and he thought that Archbishop Samuel would know what they were. One of the kids showed up at the Monastery of St. Mark and was sent on his way. The Archbishop was told that a tough looking Arab with some dirty old rolls had been looking for him. He decided to look into it further and ended up with four of the scrolls.

Archbishop Samuel was sent by the Church to help it grow in the United States. There were only three Syriac Orthodox parishes in the United States, one of them in Worcester, which is why the Archbishop, who became known as Mar Samuel, spent so much time in Worcester. The Manoog family, which was active in the parish, had a bedroom reserved for him in their home and that is where the four scrolls were stored for most of the period from 1949 to 1954. Mar Samuel would be appointed Patriarchal Vicar to the United States and Canada and, in 1957, Archbishop of the newly created Archdiocese of the United States and Canada. He did such a good job of growing the Church, that after his death in 1995, the Archdiocese was divided into three. The proceeds from the sale of the Dead Sea Scrolls played a role.

The Archbishop did not have a lot of luck in getting institutions interested in the scrolls. It was his co-trustee, Charles Manoog who hit on the idea of advertising the scrolls in the Wall Street Journal. Mr. Manoog’s grandson shared with me the typed text of a talk that Mr. Manoog used to present. Here is what happened next:

Eventually one of the vice presidents of the Chemical National Bank contacted me by phone and asked me what price I wanted for the scrolls. I asked him if knew what the scrolls were, their age, etc. He replied that his only interest was how much I was asking. It was hard to determine a price on priceless objects such as these. I asked for $500,000. After some negotiations we settled on a price of $250,000. He asked me to bring lawyers to New York to consummate the transaction. I informed them that lawyers were not needed and that I had the scrolls which I could turn over to them if they would give me a certified check payable to the Trust and that the only title I had was that of a Trustee. They finally agreed so I took the scrolls in my car and drove to New York.

It later turned out that the bank was acting on behalf of the Israeli government.

The problem with the trust, which was amended once, was that it gave too much control over the corpus to the Archbishop during his lifetime. Initially it had also made provision for his mother. The later version of the trust supported the theory put forth in the appellate case that they amounts required to be paid to the archbishop created basis in the scrolls. It did not work.

In the future, planners would use the non-recognition of sales to grantor trust to great advantage in estate planning. Here it amounted to an income tax disaster.

Was There A Better Way ?

Eventually the trust assets were turned over to the Church. It is absurd of me to second guess a transaction from over fifty years ago, but I can’t help but wonder why nobody though of “corporation sole”. People have been getting in a lot of trouble with “corporation sole” of late, applying it where it has no real application, but this is one transaction where it was actually applicable. Mar Samuel was an actual Archbishop in an ancient hierarchical church. The Syriac liturgy is in what is believed to be the language that Jesus spoke. It is worth noting that the trust was established just before a massive recodification of the Code. Charlie Manoog, the grandson, has shared copies of the trusts with me, but I am not enough of a tax archaeologist to reconstruct why it was thought that they might have worked.

The brief sojourn of a few of the most important scrolls in Worcester is not often remarked in accounts of them. Charlie told me that as a teenager he would hear from his young Jewish friends that the people in the museum in Jerusalem would be given a heads up when kids from Central Massachusetts were visiting so that they could mention it. The tax litigation is also seldom mentioned, although the New York Times noted it in Mar Samuel’s obituary in 1995.

I think I find this story irresistible because of the way it mixes the mundane and the fantastic. The Dead Sea Scrolls shared an address with what was locally known as the “toilet museum”. The image of somebody packing the Dead Sea Scrolls in a car and driving from Worcester to Manhattan to pick up a check just seems way too ordinary. Seems like there should be a couple of Mossad agents or somebody from Opus Dei involved.   I guess that’s what happens when a tax blogger tells the story.