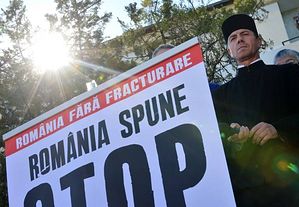 Vasile Laiu, the Christian Orthodox archpriest of Barlad, takes part in a protest against shale gas exploition next to a pancarte reading in Romanian "Romania without fracking, Romania say STOP". Picture: AFP
Barlad, Romania - As Orthodox priest Vasile Laiu gazes over the picturesque hills of eastern Romania, he prays they will be spared the shale gas wells and drilling rigs dotting some US landscapes.

For months the 50-year-old cleric has been one of the most outspoken opponents to plans by US energy giant Chevron to drill for shale gas in this rural and impoverished region.

Clad in his black cassock, Father Laiu has joined thousands of locals in street protests against a project he says "threatens man, nature and future generations".

Growing up in an oil-producing region, he is not an enemy of the energy industry, he insists.

But like many he opposes the controversial drilling technique known as hydraulic fracturing or "fracking".

It involves injecting huge amounts of water, mixed with sand and chemicals, at high pressures to break up rock formations and release the gas.

Widely used in some US states such as Pennsylvania and Colorado, it has been banned in Vermont as well as in France and Bulgaria because of potential air and water pollution.

When the mayor of the eastern town of Barlad banned a rally against fracking last April, Laiu welcomed the protesters in his church.

"The Church does not interfere in politics but if the health or life of only one of my fellow men is put in danger, it is my duty as a priest to intervene," he told journalists in an interview.

Laiu, the top Orthodox priest in the Barlad region, has spent more than half of his life serving the villages. After the fall of communism in 1989 he watched his parishioners fight for jobs and farmers try to make ends meet in the new capitalist economy.

But since 2011, when Chevron obtained a 600,000-hectare concession to look for shale gas, the region has been caught in a new battle about its future.

Its promoters say shale gas extraction can create jobs, slash energy prices and provide a boost for the Barlad economy plagued by 10% unemployment, the highest rate in Romania.

Others dismiss the shale frenzy as a temporary fad that could cause lasting damage to the environment and public health.

Thanks to the globalised world, the Oscar-nominated documentary "Gasland" and testimonies from American families about health problems they believe are linked to shale gas drilling have reached this far-flung corner of Romania.

A 2012 study by Duke University in the US state of North Carolina showed that drinking water wells are at risk of contamination from fracking because of underground pathways.

Father Laiu's main fears are over water. The area suffers from droughts, and fracking needs enormous amounts of water - up to 20,000 cubic metres - per well, according to industry figures.

Four-year-old daughter died from a tumour

The disposal of wastewater laced with corrosive salts, carcinogens and natural radioactive elements is another worry in an area where villagers grow their own fruit and vegetables and raise livestock.

"I have three children and I want them to grow up in a safe environment with clean water," said Alina Secriaru, a nurse from Barlad.

"Who will be willing to buy wheat, cheese or fruit" if millions of litres of toxic water are handled in the region?, Laiu asks.

Chevron spokeswoman Sally Jones stressed that it "operates at the highest standards in terms of safety and environmental protection".

The company "remains committed to being a responsible partner in Romania ... actively contributing to the local communities in which it operates", she added.

But Father Laiu says the villagers are being ignored: "Parishioners found prospecting equipment sinking pipes into fields without prior notice. Then they saw the walls crack" on their buildings, he said.

The priest's steadfast stance has impressed many.

"He stayed with us when politicians who were on our side last year abandoned us," said notary and anti-fracking campaigner Lulu Finaru.

Ponta, in power since May 2012, even put a moratorium on drilling.

But since that moratorium expired in December, the PM and rival President Traian Basescu have become leading European supporters of shale energy.

A US study estimated the joint reserves for Romania, Bulgaria and Hungary at around 538 billion cubic metres, possibly making it the biggest deposit in eastern Europe.

"Britain and Poland are looking to exploit shale gas. I do not think they would do something bad for the people," Barlad Mayor Constantin Constantinescu now argues.

But Laiu remains determined to make the voice of the locals heard.

"Years ago, my four-year old daughter died from a tumour. When I asked the doctor why, he answered: 'Only God knows, father. But we are too close to Chernobyl and that could be the cause'.

"I cannot remain indifferent when the environment is concerned. Life is more valuable than any money they offer us," Laiu said.