The Ascension of the Lord 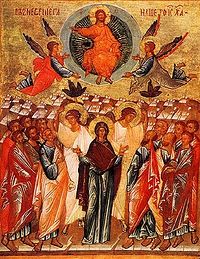 Throughout the 40 days following the Feast of the Resurrection of Christ, Paschal chants sound within our churches and in the hearts of the faithful. The Risen Christ spent that period of time on earth, demonstrating to His disciples the reality of His Resurrection. But lo, that 40-day period draws to a close, and, the “leave-taking,” as it were, of the Feast of Pascha approaches. In the vocabulary of the Church, the day of leave-taking is known as the Apodosis of Pascha.   The service for the Apodosis of Pascha is celebrated in the brilliant white of Paschal vestments, illuminated by the light of the Paschal sun, with that same fullness of joy as on the first day of Pascha. And the Feast of the Ascension approaches: That day enters our lives as a spiritual reality: the day on which the Apostles and the Mother of God gathered around the Risen Savior for the last time, on the Mount of Olives; the day on which, while blessing them, He began his departure from the earth, and as St. Luke the Apostle tells us in the Acts of the Apostles, “and a cloud received Him out of their sight.”

Ordinary human consciousness, drawing only on the experience of earthly existence and its physical laws, can no more comprehend Christ’s Ascension than it could His Incarnation or His Glorious Resurrection from the dead. Even the disciples who saw the empty Tomb, who saw the Risen Christ, who witnessed His Ascension, had mixed feelings about everything they had seen. They vacillated between exaltation over the miracles they had witnessed and misunderstanding and doubt. Toward the end of the Gospel according to Matthew, we read that the 11 Disciples saw the Risen One in Galilee, “and when they saw Him, they worshipped Him: but some doubted.” The laconic words of the Gospel say nothing about the nature of their doubts. But the Apostles’ doubt makes their state close to that feeling familiar to anyone striving to find a conscious and faith grounded in understanding.

The true, religious order, beyond wisdom, reveals itself to us in response to our effort to touch it, but only with the assistance of the grace of God, which heals the infirmities and fills what is growing scant. Only with the miracle of Pentecost, the descent of the Holy Spirit upon the Apostles that took place 10 days after the Savior’s Ascension, were the Apostles completely freed from their doubts.   We see them as fearless and untiring witnesses to, and preachers of, the Word, fearless even in the face of persecution and martyrdom. From a human perspective, they could have been expected to mourn upon their being parted from the Lord. Yet, in the Gospels it says that they returned to Jerusalem with joy.

Why did Christ, the Miracle Worker Who had conquered death, not remain on earth to lead and rule over His people? The reply is found in the Gospel according to John, which records for us Christ’s talk with His disciples before His Passion, and His High-priestly prayer to His Father. In speaking to his disciples about his coming departure from them, he had in mind not only His Passion and death on the Cross, but His Ascension to Heaven that was to follow. As long as Christ was still on earth, the work of the salvation of man and all creation had not been accomplished. For Christ came so that those who are on earth might be united to the heavens and that end of that podvig, which is for us unto salvation, is His Ascension. In it our human existence, having gone through the crucible of suffering, and shown that it is more powerful than death, is brought into the fullness of divine life: In His Ascension, Christ did not become dis-embodied, dis-Incarnate. He remains forever, perfect God and perfect Man. By His earthly path in obedience to that Truth He had revealed to us, we can unite our life with His perfect and eternal existence, and thereby enter into the Kingdom of Glory which He revealed to us.

In His Ascension, Christ left the world different from what it was when the miracle of His entry into the world, His birth of the Most-pure Virgin Mary, took place. Most of the human race then remained in darkness, and only individual select prophets lived in hope and anticipation of the coming of the Savior and Messiah into the world. Now it was a different world, and a new people of God. That earth had witnessed the miracle of the birth in Bethlehem, had seen Christ’s Transfiguration, and had been illumined by the light of His Resurrection from the dead. It was for that reason that Christ ascended, blessing that earth which He was leaving for a time, but from which He was henceforth to be eternally inseparable.   Parting from Christ at His Ascension is at the same time a joyous anticipation of His victorious Second Coming.