Through Your Glorious Ascension

By the Very Rev. John Breck

Psalm 67/68 is considered by most biblical scholars to be the most difficult of all psalms to interpret. The current consensus holds that the psalm was an ancient cultic hymn, originally recited in an autumn festival by the covenant-community of Israel. Its theme celebrates the coming of God to His people, from Sinai to Zion, in order to actualize in their midst His past mighty works of salvation. This actualization then leads the people toward the eschatological future, the age to come, when God’s glory and majesty will be recognized and acknowledged by all the nations of the earth.

As difficult to interpret as many may find it to be, this psalm, with its opening cry, “Let God arise!” is nevertheless one of the most familiar biblical pronouncements of the Orthodox paschal season. It begins with what the Church recognizes as a prophetic announcement of our Lord’s resurrection. This is complemented by what biblical and patristic tradition sees as allusions to Christ’s ascension and the sending of the Holy Spirit at Pentecost. St Paul offers this interpretation in his letter to the Ephesians, where he modifies, in a minor yet significant way, the Septuagint version of Ps. 67: “When He ascended on high, He led a host of captives, and He gave gifts to men” (Eph 4:8). Those gifts, as the apostle declares, include the charismata, the “spiritual gifts” or gift of the Spirit Himself, bestowed upon the Church for the preaching of the gospel and the upbuilding of the Body of Christ.

Another theme emerges throughout this letter, also derived from Ps. 67/68. By his descent into the “depths of the earth,” into the heart of the fallen creation, Christ destroys the power of sin and death. And by His ascension in glory, He “fills all things with Himself” (Eph 4:9-10). This is the same message proclaimed by the Gospel of John: “No one has ascended into heaven but He who descended from heaven, the Son of Man,” and this, to work out salvation and eternal life for all those who believe (John 3:13-15). 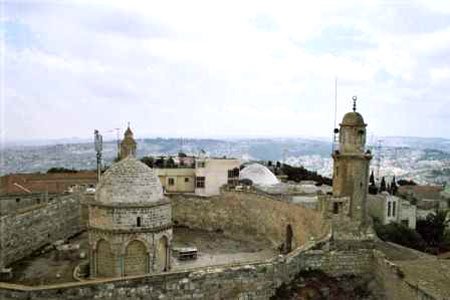 The entire Christian mystery is expressed by this double movement of descent and ascension, the incarnation and glorification of the eternal Son of God. As Orthodox spiritual and liturgical tradition affirms, this movement was undertaken not for Christ’s own sake, but for ours. Through His incarnation, the Son of God took upon Himself our very life and being, the specific conditions of our human nature, in order to restore that nature to its original perfection, and to open the way for us to ascend with Him to the heights of heaven, there to share with Him His own glory and majesty.

Elaborating on this theme, St Irenaeus of Lyon declares in his treatise Against Heresies (III.19.3), “The Lord himself gave us a sign… A virgin conceived and bore a son, ‘God with us’ (Isa 7:14). He descended into the depths of the earth to seek the lost sheep, His own handiwork, which He Himself had made. Then He ascended into the heights above, to offer and submit to His Father this humanity (hominem) which had been found, becoming Himself the first-fruits of man’s resurrection.”

A familiar prayer, attributed to St Symeon Metaphrastes (a mid-tenth century Byzantine hagiographer) and included in the Orthodox prayers before communion, recounts the significance of events in Christ’s life, death and glorification, together with their spiritual and moral significance for believers:

“Through Your life-giving resurrection You raised up the first father who had fallen. Raise me up, for I am sunk in sin, and give me the image of repentance.  Through Your glorious ascension You made the flesh that You assumed to be divine and placed it on the throne at the Father’s right hand. Grant me to receive a place at the right hand with the saved through communion of Your Holy Mysteries.” 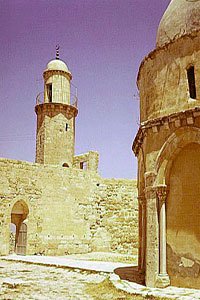 By His incarnation, Christ deified the flesh, the body with its human nature, and thus He restored it to the perfection and glory for which God originally intended it. As the First Adam, the archetype of all human existence, and as the Last Adam, the Author of Life who gives life to those who dwell in Him, Christ ascends in his “divine flesh,” exalting newly perfected human nature with Himself. The throne is the image that symbolizes that exaltation. By placing His deified flesh on the throne at the “right hand” of the Father, God the Son makes the ultimate sacramental gesture, offering our own fallen yet restored nature to Him who is the Source of all life, both human and divine. Because of our incorporation into the life of the Son, we can hope to join with the saints, the host of the saved. Yet this hope is already partially realized, insofar as we partake of that divine life here and now by participating in the Holy Eucharist.

A further refinement of this theme is offered to us by the great Byzantine mystic, St Gregory of Sinai (+ 1346). In the chapter from the Philokalia known as “Further Texts” (Alia Capita, PG 150.1300), St Gregory describes in eloquent terms the correspondence between the descending, ascending movement of Christ and spiritual growth in our own life. The passage is worth quoting in full:

“Everyone baptized into Christ should pass progressively through all the stages of Christ’s own life, for in baptism he receives the power so to progress, and through the commandments he can discover and learn how to accomplish such progression. To Christ’s conception corresponds the foretaste of the gift of the Holy Spirit, to His nativity the actual experience of joyousness, to His baptism the cleansing force of the fire of the Spirit, to His transfiguration the contemplation of divine light, to His crucifixion the dying to all things, to His burial the indwelling of divine love in the heart, to His resurrection the soul’s life-quickening resurrection, and to His ascension divine ecstasy and the transport of the intellect into God.” 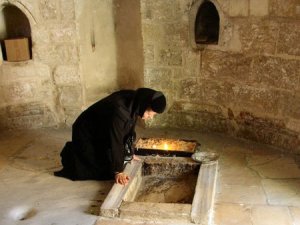 To most of our contemporaries, this kind of interpretation of the events in Christ’s life seems odd if not scandalous. It strikes them as pure allegorizing: taking the historical events of Christ’s passion, death and resurrection, and reading them as metaphors to describe our inner spiritual state, the condition of the human soul.

To those of us who, in these past days, have sung out, “Let God arise!” and have tasted the heavenly gifts of his glorified Body and Blood, who have embraced others and been embraced with reconciling love “even by those who hate us,” this correspondence between the events of Christ’s life and our own is self-evident. Yesterday we were crucified with Him; today we rise with Him in glory. Yesterday He descended into the lower parts of the earth, into the darkness of our own life; today we ascend with Him in newness of life, in a potentially deified flesh, in order to take our place with Him at the right hand of the Father and in the midst of the communion of saints.

By His glorious ascension, Christ has already spoken to our deepest longing and fulfilled our most fervent hope. He has taken us as He took the hand of Adam, as in the paschal icon of the descent into hades. He has raised us up with Himself, out of the grave of our own making, and ascended with us into the awesome and blessed presence of His Father. He has transported into the very presence of God our “intellect,” our spiritual perception of transcendent life and being. And in so doing, He has led us – even in the mundane affairs of our daily existence – into the joyful and healing state of “divine ecstasy.”