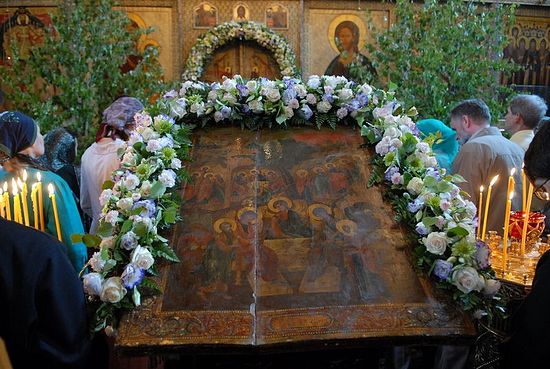 "And there appeared to them cloven tongues as it were of fire, and it sat upon every one of them: and they began to speak with divers tongues, according as the Holy Spirit gave them utterance." (Acts 2:3-4)

Following His Ascension, when the Savior fulfilled His promise and sent the Holy Spirit, the Comforter appeared to Christ’s followers as tongues of fire. As a result of the Spirit’s operation the disciples spoke in languages foreign to them and were guided as to what to say.

First, it affirms the universal character of Christ’s mission, one which was wrought for all nations, resulting in the outpouring of the Holy Spirit.

Furthermore, the Divine Services sing of Pentecost in terms of being a reversal of that which took place at the Tower of Babel (Genesis, chapter 11). "Of old the tongues were confounded because of the audacity in the building of the tower, but now the tongues are made wise because of the glory of Divine knowledge. There God condemned the impious because of their offence, and here Christ hath enlightened the fishermen by the Spirit. At that time the confusion of tongues was wrought for punishment, but now the concord of tongues hath been inaugurated for the salvation of our souls." ("Glory … now and ever," verse for the Aposticha at Pentecost Vigil) "Once, when He descended and confounded the tongues, the Most High divided the nations; and when He divided the tongues of fire, He called all men into unity; and with one accord we glorify the All-holy Spirit." (Kontakion for the Feast)

At Babel a false unity established out of pride led to a scattering of all men, confusion among the citizens of the earth. Diverse "tongues," in this case, became indicative of divisions, man’s inability to understand God, his fellow man and environment. On Pentecost, however, the many "tongues" of the Divine Spirit became a sign and source for unity, a profound unity established through love for Christ that can only be granted by God Himself.

Of great significance as well is the fact that the fruits of the disciples’ labors on Pentecost was the addition to the Church of about three thousand souls. (Acts 2:41) Here we begin to understand what our Lord meant when He told His chosen ones that they would henceforth be fishers of men. Hearing about such a large number of individuals brought into the Church by Peter and the eleven, we recall that during Christ’s earthly ministry it was only when the disciples obeyed His will that they caught such an enormous catch of fish that their "net brake." (Luke 5:4) "Blessed art Thou, O Christ our God, Who hast shown forth the fishermen as supremely wise by sending down upon them the Holy Spirit, and through them didst draw the world into Thy net. O Befriender of man, glory be to Thee." (Troparion for the Feast).

What happened on that fiftieth day after our Lord’s resurrection was the filling of the disciples with the Holy Spirit, their transformation into the Church. Pentecost is the day of the Church’s founding. From this point in time the disciples were empowered to do what our Lord told them: "As my Father hath sent me, even so send I you." (John 20:21)

The record of what the disciples did from the day of their "empowerment" is clearly a matter of history. We know that even in St. Paul’s time the Gospel had gone as far as Spain in the West and we are told as far as India in the East. By the beginning of the fourth century the Emperor Constantine not only stopped the persecution of Christians but gave the Church an official status. Christians to some measure, by this time, occupied every city and town. And there were still those who were willing, if necessary, to give their lives for Christ. From that time as well, the Church never lost its conviction that Jesus had given it the strict mandate to "catch" the entire world, to bring all men into His net. The disciples — and those who came after them — were convinced that their message, committed to them by Christ, was vital, a matter of life or death. This is why they were able to convince so many, because they themselves were convinced.

Speaking of our contemporary situation, it can be said that somewhere along the line, many Church members have lost this sense of urgency with regard to the Faith. Orthodox Christianity has become, for not a few of its adherents, simply the national religion of certain people, part of their culture, their ethos. The very thought of Orthodoxy being of vital importance because the world’s salvation depends on it, is utterly alien to numerous individuals.

But, thanks to the inspiration of the Holy Spirit, many in the Church have come to understand the profound implications of Christ’s words to His disciples on a particular occasion, when they could do nothing for a man who needed healing: "Bring him to me."

The Church in our own time is regaining its deep commitment to this command relative to the entire world: "Bring him to me." We must bring those in need of healing — and who is not in need of the healing that Christ brings? — to our Lord, the only true Physician of souls and bodies.

Let us take time then and analyze to what extent we have been able to comply with Jesus’ command. If the truth be told, given the number of Orthodox in this country and the resources now available, we have not lived up to our potential in terms of making new disciples. At least one reason for any apparent failures lies in our own lack of conviction. We must ask ourselves, therefore, are we convinced, each of us individually, that our Orthodox Christian Faith is the most precious thing that we possess, that it is absolutely essential for those with whom we come in contact to know about it? By and large, according to how we live day to day, many of us would have to answer "no" to the above questions. And yet for the Body of Christ to grow the answer must be "yes." We cannot impart to others what we ourselves do not have. Christianity is so maximalistic in terms of what is expected of man — we speak of being crucified with Christ and losing our lives for His sake and the Gospel’s – that for anyone to believe the claims of its adherents, the Faith must be seen lived out by those who preach it. Thus, relative to the Feast of Pentecost, our own mission in the United States begins with an appreciation for what has already been given: "the seal of the gift of the Holy Spirit." At our Chrismation, which is our personal Pentecost, the same Spirit was bestowed for our enlightenment and transformation, so as to empower us to be "invincible warriors" and witnesses for the Faith as were Christ’s disciples 2000 years ago. (Festal hymns taken from The Pentecostarion published by Holy Transfiguration Monastery, Boston, MA.) 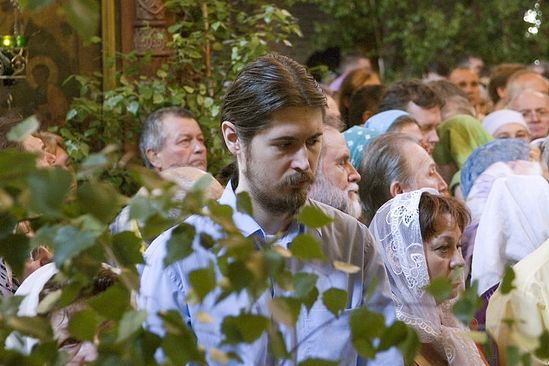 Lawrence (Dale Dickerson)6/23/2013 3:24 am
Why did you not used the Russian Church Abroad translation of the The Pentecostarion? it is very good translation and is common use in the English speaking Russian Orthodox Churches in the USA.
×