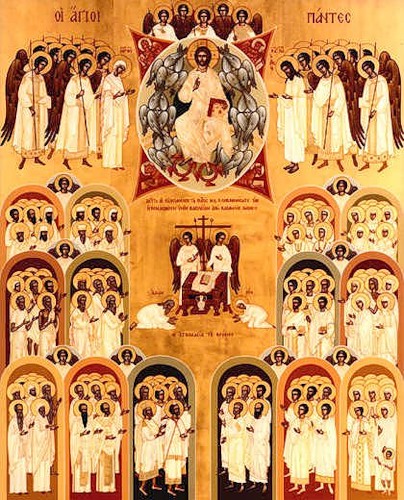 It is good, O brethren, to sing the words of the holy God-bearers, for they strive everywhere to instruct us in everything which leads to the enlightenment of our souls. From the words we sing on the feast day, we should always come to understand the meaning of the what is being commemorated, whether it be a feast of the Lord, of the holy martyrs, or of the holy Fathers; in a word no matter what saint or blessed commemoration it is. Thus we should sing with heedfulness and penetrate with our minds into the significance of the words of the Holy Fathers so that we might sing not only with our lips as is said in the Patericon, but that our heart also might sing together with them. From the first hymn of the feast we have learned as we are able something about Holy Pascha; let us look further and see what St. Gregory wishes to teach us about the holy martyrs. In the hymnody about them, taken from St. Gregory's words, we sing today, "Living sacrifices, rational whole-burnt offerings," and the rest. What does this mean "Living sacrifices?" Sacrificial is the name for everything which is consecrated as a sacrifice to God, as for example sheep, bulls and the like. But why are the Holy Martyrs called living sacrifices? Because a lamb which is offered in sacrifice is first slaughtered and dies and then is sliced in pieces and offered to God; while the holy martyrs, while still being alive, were cut into pieces, scraped, tortured and endured dismemberment. Sometimes the torturers cut off their hands, feet and tongues and gouged out their eyes; and they were scraped in the ribs to such an extent with iron that their very inward parts were visible. In all of this of which I speak the Saints endured while still alive, still having their souls within themselves, which is why they are living sacrifices. And why are they called "rational whole-burnt offerings?" Because sacrifice is one thing and whole-burnt offering another. Sometimes men offer in sacrifice not a whole lamb but only a rudimentary part, as is said in the Law: the right shoulder, the pancreas and both kidneys, and the like (Ex. 29:22). Those who offered these, the rudiments, called this a sacrifice, which is why such an offering in general is called sacrifice. A whole-burnt offering is the name given to an offering of a whole lamb or a whole bull or any other offering burned without any remnant as is said in the same Law: the head with the feet and inward parts, sometimes also with the stomach and in a word, everything is burned entirely, and this is called a whole-burnt offering. Thus the sons of Israel according to the Law offered sacrifices and whole-burnt offerings. These sacrifices and whole-burnt offerings were a pre-figuration of the souls who desire to be saved and to offer themselves as a sacrifice to God.

We will tell you a little also about this from what the Holy Fathers have said, so that when you read this your thoughts might be elevated and your soul nourished. By muscle (shoulder) they understand activity, in place of which the hand is also acceptable as I have often told you, for the muscle comprises the strength of the hand. And thus the Israelites offered in sacrifice the strength of the right hand—that is, good deeds; for the right hand signifies goodness. For all the other parts of an animal which we have mentioned, for example the pancreas and the two kidneys, and the fat from around them, the hip and the fat around the hips, the heart and the chest and the rest are likewise pre-figurations or symbols, for as the Apostle says, Now all these things happened unto them for ensamples; and they are written for our admonition (I Cor. 10:11). I will explain this to you.

The soul, as St. Gregory of Nyssa says, is composed of three parts: the desiring part, the irritative part, and the reasoning part. Thus they offered in sacrifice the pancreas. Father understood the stomach to be the seat of desire, and the pancreas is the edge of the stomach. They thereby prefiguratively offered the edge of the desiring part, that is its rudimentary part—its best and most important part. This signifies that we should love nothing more than God, and of all that is desirable we should prefer nothing to the striving for God: for we have said that they offered to Him the very best. The kidneys, however, and their fat and the hips and the fat covering the hips signify exactly the same thing: for they say that this is the seat of desire; all these are prefigurations of the desiring part.

Now the prefiguration, the symbol of the irritative part is the heart, for they say that this is the seat of irritability, as St. Basil indicates when he says that irritation is the fever of the blood around the heart. The chest is the symbol of the reasoning part, for this is the accepted meaning of the chest. Wherefore it is said that when Moses clothed Aaron in the garment of the High Priest by command of God, he placed upon his chest a piece called the logion which concerns the intelligence, as described in Leviticus 8:8. And thus all of this as we have said is a symbol of the soul, which by God' help cleanses itself by means of good activity and is restored to its natural condition. For Evagrius says: "The intelligent soul acts according to its nature when its desiring part desires virtue, when its irritative part struggles for it, and its reasoning part is given over to contemplation of the creation. When lambs are offered in sacrifice, or a bull, or something similar, the Israelites took out these parts, that is the kidneys and the rest, out of what was offered and placed them on the altar before the Lord and these they called the sacrifice. But when they offered the sacrifice animal entirely and burned it just as it was, whole and perfect, they called this, as we have said above, a whole-burnt offering. This is a symbol of the perfect, those who say, Behold, we have forsaken all and followed Thee (Mt. 19:27). It is to this measure of spiritual stature that the Lord called that youth who had said to Him, All things have I kept from my youth up. For the Lord replied to this, One thing thou lackest: What is this? Come, take up the cross, and follow me (Mk. 10:21; Mt. 16:24). Thus the Holy Martyrs offered themselves wholly as a sacrifice to God, and not only themselves but also what they possessed. For as St. Basil says, we are one thing, what is ours is another thing, and the third is what we possess. We are our mind and soul, ours is the body; and what we possess is property and other things. The Saints offered themselves as a sacrifice to God fulfilling with all their heart, all their soul, and all their strength the word of the Scripture: Thou shalt love the Lord thy God with all thy heart and with all thy soul and with all thy mind (Mt. 22:37); for they disdained not only children, wives, glory, possessions and every other wealth, but even their own bodies, and this is why they are called whole-burnt offerings. And they are called rational because man is a rational animal.

"Perfect ones slaughtered unto God," and then, "Lambs knowing God and known by God." How do they know God? As the Lord Himself has indicated and instructed when He said, My sheep hear my voice, and, I know my sheep, and am known of mine (Jn. 10:27, 14). Why did He say, My sheep hear My voice, instead of saying, they hear My word and they keep my commandments and therefore they know Me? For by the keeping of the commandments the Saints draw near to God, and the nearer they draw to Him the more they know Him and are known by Him. For the more someone turns away from someone and distances himself from him, the more it can be said that he does not know that person and is not known by him. This is what the Lord Himself mean when He said, Verily I say unto you, I know ye not (Mt. 25:12). As I have said often, the more the Saints acquire virtues through the keeping of the commandments, the more they become God's own, and the more they become God's, the more they know Him, so does He also know them.

"Their enclosure in inaccessible to wolves." Enclosure is the name for a place which is shielded and fenced all around, where a shepherd gathers the sheep and guards them so that wolves might not seize them or thieves steal them. But if the enclosure has rotted away on some side, both thieves and wolves may easily enter and fall upon the sheep. Now the enclosure of the Saints is fortified and guarded on all sides, as the Lord had said, where neither thieves break through and steal (Mt. 6:20), and nothing harmful can touch them.

So let us pray O brethren that we might be vouchsafed to be shepherded together with them, or at least to be settled in that place of blessed delight and repose. For we have not attained to the state of the Saints and are unworthy of this glory, still we may not be deprived of Paradise if we are heedful and force ourselves a little. St. Clement says, "Even though one may not be crowned, still he should strive to be not far from those who are crowned." (Ep. 11 to the Cor., ch. 7). For just as in imperial, royal palaces there are great and glorious ranks, for example senators, patricians, generals, governors, and members of the privy council, and they are all very honored officials, so in the same palaces there are certain other ranks who serve with a small wage; however they are still called servants of the king and are inside the palaces even though they do not enjoy the same glory of those greater ranks. It occurs that sometimes they also, by advancing little by little, receive great and glorious ranks and honors: thus we also should strive to flee active sin so that at least we might be delivered from hell. Then we obtain the opportunity, thanks to God's love of mankind, to gain entrance into Paradise itself, by the prayers of all the Saints. Amen. 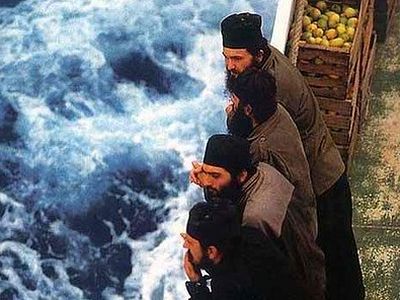 The Epistles of St. Abba Dorotheus
Abba Dorotheos
When your soul becomes insensitive, brother, it is useful to read the Holy Scriptures and the heart-touching words of the Holy and God-bearing Fathers, to remember God's Last Judgment, the departure of the soul from the body, and the terrible powers that can greet it, and with whose cooperation the soul committed evil acts in this brief and tormented life.

Some instructions of Abba Dorotheus

Some instructions of Abba Dorotheus