On the Feast of All Saints of Russia 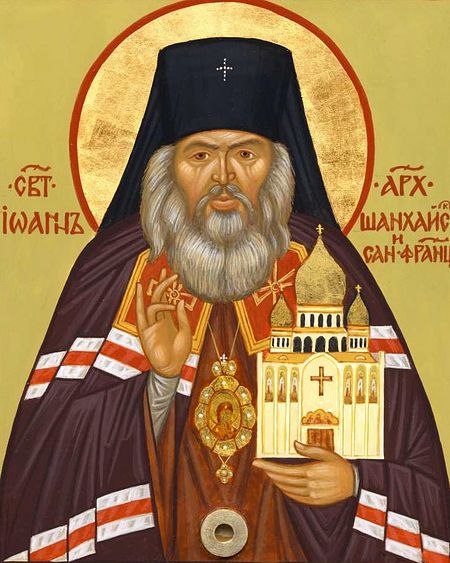 St. John of Shanghai and San Francisco. The feast of All Saints of Russia is not a feast of just righteous ones, but of saints. God is filled with holiness; "Holy is the Lord our God." But man is created in the "image and likeness" of God, and the Lord at creation breathed into him the power to partake of the Divine essence, and thereby come closer to God. And the closer a man is to God, the holier he is. Saints are those who have partaken of the Divine essence and made it their own; to God, they become "His own." The saints enjoy blessedness, for God is blessed. From them there is light for men. Through them the power of God is revealed.

Saints retain all that is characteristic of the human condition; they know everything that is ours. They are near to God, but they are also near to us; they walked and dwelt among us. The people of Holy Russia venerated them, kissed their icons and holy relics, wanted to be as close as possible to the saints, touched holiness, and the Russian land was filled with it. Holy Prince Vladimir demonstrated the regenerating power of the Divine essence upon himself. Previously wild and passionate, he was completely reborn, so that he became a new person, radiating light and joy, and was called "beautiful sun."

Do not think that contact with holiness is the fate of only the Russian nation. No! All peoples can live in the spirit that Holy Russia lived and lives in, and then they are close and comprehensible to each other. St. Anthony of the Kiev Caves and St. Anthony the Roman were men of different countries, but together they built the Russian Church, and they are equally near and dear to her. Until recent times we did not have martyrs, but there was a multitude of saints. They influenced the direction that the Russian people took; the people loved them and tried to follow them, and this determined the way of life. All of life was illuminated, until spiritual apostasy began, which led to a fall. But Holy Russia is alive. When the persecution began, strugglers were revealed, confessors, and now we have martyrs.

The spirit of Holy Russia lives. Holy Russia is part of the Ecumenical (i.e., the entire) Church. Celebrating the saints, we desire to be together with them and to acquire the power of God through their holiness. They know us, our nature, our characteristics and spirits, and they know our souls, too--what is necessary for us. We are close to them as children are close to their parents. The Apostle Peter prayed for his disciples. St. Demetrius of Thessalonica rushes to help the Greeks because this is his own nation. Sts. Boris and Gleb help their relatives (e.g., Alexander Nevsky), and their own Russian people.

Yours in Christ,
John

Michael Donley7/9/2013 5:11 pm
Dear Editor, Thank you for your wonderful website and for the sermons by St John of Shanghai. However, in the current article I fear there has been a mistranslation which could cause considerable confusion, not to say error, and which does not convey St John's meaning.
I refer in particular to the phrase "divine ESSENCE", which is used more than once in the translation. The word in the Greek and Slavonic text for 2 Peter 1:4 (which is surely in St John's mind) is more correctly rendered as "NATURE".
As St Gregory Palamas clarified, we do NOT participate in God's ESSENCE but in His ENERGIES.
I do not know the source of the translation which you have posted on the website but perhaps it is worth checking and possibly correcting.

Yours in Christ,
The sinful servant of God, Michael
×