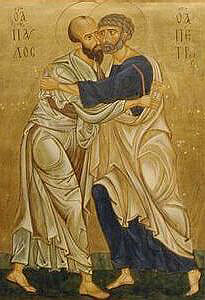 Peter and Paul - Co-founders of the Church at Antioch ...their backgrounds could hardly have been more different. The ways in which they came to know Jesus were certainly in stark contrast. Without the guidance of the Holy Spirit the only feelings they would probably have held for each other - even after they ended up on the same side - would have been a mixture of mistrust and suspicion. However, God brought them together to be of one mind and heart in Christ.

Peter, the Galilean fisherman, portrayed in scripture as a rough diamond, given to outbursts of temper and prey to what today might be described as setting his mouth in motion before his brain was in gear. In the Gospels, Peter does not always seem to be able to handle his own emotions. Yet Jesus had Peter’s future mapped out - ‘Upon this rock, I will build My Church’ (Matthew 16:18). After the Ascension we see a very different Peter recorded in the Acts of the Apostles. Peter is now very much in charge; he preaches and teaches in the Temple, he heals the sick, he declares the Gospel of Christ before all nations (Acts 2,3,4 and 5). Clement of Alexandria claimed that Our Saviour had entrusted Peter, James and John with a form of higher knowledge, perhaps this explains the change.

Then there was Paul, the Roman citizen, the urbane cosmopolitan man of Tarsus in Asia Minor, trained as a Pharisee in the school of Gamaliel. Josephus, the Roman—Jewish historian, records that Gamaliel had urged his pupils not to persecute the Christians, reasoning that if there was nothing in what they preached it would all soon come to nothing, but if there was then it should be listened to. Gamaliel’s words fell on deaf ears where Paul was concerned. So zealous was he for the ideals of Jewish purity, in the best traditions of Judas Maccabeus and all the other Jewish folk heroes who followed him, that he saw Christianity as something which had arisen as yet another breakaway sect, diluting that same purity, which must be exterminated at all costs.

Paul set about doing just that, little knowing what was to happen next. Peter’s call from Jesus happened one still day by the Sea of Galilee, when he obeyed the Lord’s call and gave his life to His service. Paul’s came in a blinding flash on the road to Damascus when Jesus asked him why he was persecuting his Lord. After Paul’s sight was restored he went off to Arabia - no doubt to be guided by the Holy Spirit - communing with no man. After that he returned to Damascus and spent three years there before going up to Jerusalem to meet with Peter.

We know (Galatians 1:18) that their meeting lasted 15 days, but we can only guess at what they may have talked about. The conversion of Gentiles had already begun. The first Gentile Christian was the Ethiopian Eunuch, whom Philip helped to understand the scriptures (Acts 8:26-39), thus fulfilling the Old Testament prophesy ‘Ethiopia shall stretch out her hand to God’ (Psalm 68:31). Then Peter had his vision which told him that nothing God had made should be deemed unclean and converted the Centurion and his household (Acts 10). From then on, Peter declares the redundancy of the old covenant, with its circumcision and dietary laws, and proclaims the new one, purchased with the blood of the Lamb. St. Paul was the first to arrive in Antioch.

After the martyrdom of St. Stephen most of the disciples (apart from the Twelve) dispersed to places as far apart as Phoenicia and Cyprus as well as Antioch but at first they spread the word among the Jews only. Then the Greeks began to listen. When the news of that reached Jerusalem, Barnabas went to Antioch and summoned Paul from Tarsus to help him with the work (Acts 11:19-26).So the Church at Antioch was established and flourished. But it wasn’t all plain sailing from there. The weakness of Peter was again apparent when he arrived in Antioch. Paul remonstrated with him because, in the presence of Jews, Peter chose to eat only with Jews (Galatians 2:12), thus turning his back on the new doctrine he had espoused. Then Paul had his argument with Barnabas who wanted John Mark to accompany them in their work. Paul saw Mark as a backslider and preferred to take Silas. So Paul and Barnabas parted company (Acts 15:36-41). The latter went off to Cyprus, where the office of Archbishop is referred to as ‘The Throne of Barnabas’ to this day and many towns have a street named for Agios Varnavas.

In his ‘History of the Church’, Eusebius writes “Men who through the error they had inherited from generations of ancestors were in the grip of the old spiritual sickness of idol-worship, by the power of Christ and through the teachings of His followers and the miracles they wrought, were freed from cruel masters and found release from galling fetters. They turned their backs on devilish polytheism in all its forms and acknowledged that there was one God only, the Fashioner of all things. Him they honoured with the ordinances of true religion through that divine, reasonable worship of which Our Saviour sowed the seed in the life of men.” So Antioch was a milestone. It was the first ‘Gentile’ church - and also the first place in which Jesus’ disciples were referred to as Christians.

If we read the Acts of the Apostles in a casual way, as though reading a novel, the pattern of events seems somewhat fragmented, but if we think deeply about it we can discern the Holy Spirit at work in both Peter and Paul, driving them towards the goal of spreading the Kingdom outwards from Jerusalem and the Jews and into the whole world, which is borne to fruition in the achievements at Antioch. In the providence of God it is why we stand here today.

Now we can reckon Peter’s lapse and rebuke by Paul and his later complaints that Paul talks of many difficult matters and the wobble in his faith to his worry that Jewish Christians were going to be alienated by the Gentile mission. But St. Paul also had to curb his enthusiasm by submitting his insights to the Church in Jerusalem, the then centre of the Christian world. So it was possible for these two men who had slightly different concerns to come together in an apostolic way in Council to focus on what God was doing. When they did this bit also gave due credence to the traditions of their ancestors whilst being open to what the Holy Spirit was going to do. This subtle balance between being open yet conservative is what pushed the Church out into the Roman world.

The same challenges face us to day. We have to be faithful to the Tradition of the Church, which is what we have received, and to sell that for a farthing (few cents) is to surrender the whole purpose and meaning of the Church. However, without a creative engagement with modern culture; without listening to the word of God as it is spoken today; without being attentive to the work of the Holy Spirit in that same world, we risk Christianity becoming once again a limited sectarian enclave. This is to be contrasted with what it was driven to be by the Holy Spirit in the early Church in so far as it became a communion open to all men who had truly encountered Christ, the Living Lord and responded to Him … and that is the kissing of St. Peter and St. Paul.