The apostle Peter and orthodox conscience 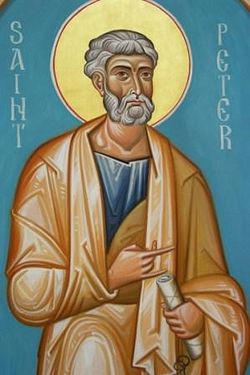 When we speak about the Apostle Peter, our mind usually goes to the plethoric and dynamic Apostle, who stood out among the Twelve as 'the head Apostle'. For we remember how often we see him from within the sacred texts, being the leader in various activities, acting also on behalf of the rest of the Apostles, yet without separating himself from them.

For instance, Christ asks "Who do men say that the Son of man is?" and Peter immediately hastens to speak out, on behalf of all, that blessed confession: "You are the Christ, the Son of the Living God". For this reason it was only natural that he receive thereafter, again on behalf of his fellow-Apostles, Christ's beatitude, which was addressed to the believers of all times: "Blessed are you, Simon Bar Jona! For flesh and blood has not revealed this to you, but my Father who is in heaven" (Mat. 16:17).

The disciples see Judas coming with the band of soldiers in order to arrest Jesus, and again it is Peter who draws his knife and cuts the right ear of Malchus, who was the high priest's slave (cf. John 18:10).

Such kind of spontaneity and dynamism by Peter explains why Christ usually addresses this Apostle either to ask "Do you love me?" and to project his example as the characteristic case of human weakness, or even to scold him bitterly, as in the case when he was obliged to call him "Satan" (cf. Mat. 16:23).

We should admit that, whether he is frightened for a moment and denies Christ in the courtyard of the high priest or whether he repents a little later and "went out and wept bitterly" (Mat. 26:75), the brave Peter gives us the most living picture of a man who cannot live below his level or pretend. He is full of blood and flesh, but also full of fire and enthusiasm. It is for this reason that he deposits every minute his human weakness and contradictory character, as well as all the power and beauty of his truth.

One would expect such a type of man to become the image of Christians of the East, and, yet, it was not so. Surely in the official worship of our Church and in our theology we have done no injustice at all to the Apostle Peter. Being always deeply conscious of the fact that he is the brother of our Andrew the first-called and Patron Saint of Constantinople, we accord a special place to the Catholic Epistles of St Peter by making them the main Reading at the Festive Vespers on the Patronal Feast of the Apostle Andrew.

The explanation for this 'injustice' is not hard at all. From the time when the West wanted to project the Apostle Peter to the point of exaggeration as ‘Prince of the Apostles' and to regard himself — and not his blessed confession — as the foundation of the entire Church, it rendered him a stranger to the East. And when at a later stage the Pope of Rome tried to support the Papal Primacy and infallibility by the supposition that Peter also had these privileges, and that he transferred them exclusively to the Bishop of Rome, it was only natural that the estrangement should also develop into an intense antipathy, which would be fatally reflected in the sacred person of the Apostle Peter, even though the latter is not at all responsible for the said fabrication of Rome.

Precisely for this reason it is time that we read again carefully whatever is relevant to the Apostle Peter in the New Testament, so that we may be able to relive the authentic Apostle of the Faith, of prayer, of action and of repentance.

Among the many passages that describe characteristic aspects of St Peter's life, the most moving is neither his confession at Caesaria of Philippi, which we have already mentioned, nor his bitter tears after the momentary betrayal at the courtyard of the high priest. For both the confession and the repentance were within the immediate logic of things for all the Apostles who lived the mystery of the direct presence of the God-Man. What was beyond this "logic of things", which constitutes perhaps the even more moving biographical element of St Peter, is the fact that at a certain time he felt his unworthiness to humiliate him. And he was not at all ashamed to declare it before Christ, thus making it a landmark of humility for all times. It was the moment when he saw the Teacher to work wonders even on the illogical nature by filling the nets with fish precisely where there was no fish a little before. And it was not the first time he saw Jesus perform miracles and doing good for people: making paralytics to walk, blind men to see again, dead people to rise.

However, in the sight of these great and unheard of miracles St Peter stands with awe and wonder, just as the other disciples also do, yet there is no mention here Of contrition and sense of sinfulness. How are we to explain this paradox? The only explanation one could give is that those people who are deeply suffering from pain and illness are offered benefits. They have surely been and purified, so that in some way have become worthy of divine mercy. But in the case of the sterile night at sea there was no particular reason for Christ to feel sympathetic towards St Peter and the other disciples who were with him. There were many people who toiled for endless hours in those parts without catching anything! Did Christ do any miracle for them all? Why, then, should he show particular sympathy towards Peter? It appears that these 'Whys' had silently revolted his conscience, and since he could not find any answer and excuse, he felt even greater the need to confess his sinfulness towards the all-knowing Lord: "depart from me, for I am a sinful man, O Lord".

Who else from the Twelve Apostles ever dared to make such a confession? Who else ever made such a comparison? Who else considered himself humbler than the others, and unworthy even for such a "lucky'" catch of fish?

This means that the "leader" of the Apostles was at the same time the humblest and the most contrite of aft the other Disciples of Christ. What could such a type of Peter have in common with the one whom the West created in imagination as the "Prince of the Apostles"?

It is, then, this true Peter, the person of contrition and humility, the one who in the end truly sacrificed his fife for Christ, precisely as he had promised it to Him, that is worth looking again at the "head" of the Apostles for all his gifts. And we should love him precisely as he has taught us to do with his Catholic Epistles, namely, to love him earnestly "(1 Peter 1:22).