Saints Peter and Paul the Apostles – Teachers of Repentance, Courage and Enlighteners of the Church 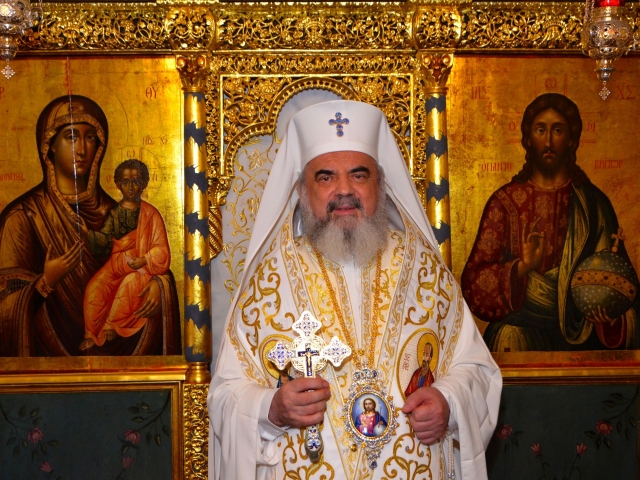 On 29 June 2013, our Church celebrates Saints Peter and Paul the Apostles, who died martyrs’ death in the time of Emperor Nero, in 67 AD. In the sermon delivered within the Divine Liturgy celebrated in the historical chapel of the Patriarchal Residence, His Beatitude Daniel, Patriarch of the Romanian Orthodox Church spoke about the life and activity of the two great Saints Apostles, of these two coryphaei of Orthodoxy.

While referring to Saint Paul the Apostle, His Beatitude showed that although he was not one of the 12 apostles whom Christ called while on the earth, he became a beloved apostle after his life was wonderfully changed, namely this 13th apostle became the most diligent missionary of all apostles. He was not called by Christ when He was on the earth, he has never met Christ as long as He was living, but he was called by the Christ ascended to heaven after He had passed through death and resurrection.

The Patriarch of Romania has also emphasised why the Church decided that Saints Peter and Paul should be celebrated on the same day.

“The Church decided that these two great Apostles should be celebrated on the same day because they died martyrs’ death in Rome, the same year, on 29 June 67. Saint Peter died a martyr’s death crucified head down, and Saint Paul the Apostle died beheaded because he was a Roman citizen and entitled to a more dignified death, not similar to the slaves’ death”, explained His Beatitude Patriarch Daniel.

While eulogizing the personality of Saint Peter the Apostle, the Patriarch of Romania pointed out his diligence for the saving work of Christ, our Lord: “Saint Paul the Apostle is an ordinary man, but with much devotion for the saving work of Christ: as long as he felt the call he followed the Saviour with much passion and love. He has a vivid, ardent temperament. He shows his love for Christ rather often through outstanding courage. He gets off the ship and asks the Saviour to walk on water up to him, showing in this way his joy to meet Christ.(…) He is a man through whom the Holy Spirit works, a man through whom Christ shows His power not only through word, but also through the wonders Saint Peter the Apostle made.”

His Beatitude has also spoken about the wonderful conversion of Saint Paul the Apostle, underlining how he changed from a great persecutor into a passionate supporter of the right faith.

“Saint Paul the Apostle proved great zeal for keeping the Jewish traditions, so that he became a great persecutor of the Christians thinking that the new teaching of Jesus Christ was overthrowing these traditions, but in fact the prophesies of the Old Testament were fulfilled in Jesus Christ so that having been a persecutor of the Christians he was given the mission to go to Damascus to arrest those who believed in Christ and bring them enchained to be judged. But suddenly, before reaching Damascus a strong light wrapped and blinded him and he heard: Saul, Saul, why do you persecute me? (that is because his name was Saul before becoming Christian). He said: Who are you, Lord and the voice of the shining light answered him: I am Jesus whom you persecute. Then, Christ, our Lord tells him that he will be sent to the nations. He advised him to go to be received by a disciple of His, Anania. He was baptised, but afraid to be killed by the Jews because he had become a Christian, he took refuge to Arabia, where he prepared for preaching for three years, for mission and fasting, praying and reading the Holy Scriptures”, His Beatitude said.

His Beatitude explained the fact that the foundation of faith the Church of Christ is built on is the confession of the divinity of Jesus Christ, a truth confessed by Saints Peter and Paul the Apostles and the basis of their mission.

“Here we have two different people as their works prove. Saint Paul the Apostle having been a scholar wrote several epistles out of which 14 preserved, works of great theological, spiritual, pastoral, missionary depth. These two different Apostles have much in common and what they have in common is the base of their mission. Both Saint Peter the Apostle and Saint Paul the Apostle love Christ from the bottom of their heart and they confess Him as God, not as an ordinary man. Thus, when Christ, our Saviour asks:“Who do you think I am?” Saint Paul the Apostle answered in the name of all apostles and said: “You are Christ, the Son of the Living God”, so that he saw a man and confessed God. He saw a man in a body and confessed God without body, the Eternal One who was incarnated and made Man out of love for the humans. (…) Saint Paul the Apostle also confesses Christ in words that have become a chant, a hymn in the tradition of our Church named the Mystery of Christianity:” Beyond all question, the mystery from which true godliness springs is great: He appeared in the flesh, was vindicated by the Spirit, was seen by angels, was preached among the nations, was believed on in the world, was taken up in glory.” It is a concentration of the confession of the Divinity of Christ and of the Mystery of the Incarnation by Saint Paul the Apostle in Epistle I to Timothy, chapter 3:16. Here we see that the foundation of the faith the Church of Christ is built on is the confession of the Divinity of Jesus Christ”, His Beatitude said.

These two apostles and confessors are also great teachers of repentance

“All his life Saint Peter the Apostle regretted his denial of Christ, so that he tried to make up for that through special diligence, through missionary zeal towards Christ. Saint Paul the Apostle has also remembered all his life that he used to persecute the Church, so that he changed this fall of his into a great missionary work, never surpassed by others, because he worked more than the other apostles in order to redeem his mistake to have been once a persecutor of the Church. This is why he wrote the most beautiful words about the relationship between Christ and the Church, saying that Christ is the Head and the Church is His Body. He learned this thing because he was persecuting the Christians, but Christ was suffering when He asked him: “Why do you persecute Me?” He did not ask him: “Why do you persecute those who believe in Me?”, but “Why do you persecute Me?. When he was at the gates of Damascus, Saul from Tars, the persecutor, later on Saint Paul the Apostle understood that it was a living relationship between Christ, the Lord, and those who believed in Him, and that when the Church, namely the Body of Christ, suffered, Christ suffered too”, the Primate of the Romanian Orthodox Church explained.

While speaking about the preaching of these Saints Apostles, the Patriarch of the Romanian Orthodox Church showed that the people were hostile to them and that they suffered a lot because of their faith in Christ, becoming models worthy following, examples of confessing the Gospel of Christ not only in good times, but also in times of persecution: “These great teachers of repentance become great missionaries too, people who enlighten the life of many pagans, who guide the confused ones, raise the fallen ones, and encourage the disappointed ones. Saint Peter the Apostle and Saint Paul the Apostle preached the Gospel of Christ in a hostile world, and they were imprisoned several times. (…) These imprisonments were complemented with many troubles, having been beaten and mocked. They suffered a lot, this fact showing that the world they were preaching in was against them very often either because of a formalist faith of the Jews or because of the pagan faiths. (…) Saints Peter and Paul the Apostles preached the Gospel in a hostile world, with much confusion from the point of view of the faith, of the life with much injustice. Nevertheless they were victorious through the power of God. (…) Today, these two great apostles, preachers, missionaries, teachers of repentance, as well as of courage, are enlighteners of the Church for us, who pray and urge us to preach the Gospel not only when everything is well, but also in times of persecution and hostility.

Saints Peter and Paul the Apostles are considered protectors of those deprived of liberty in Romania.

Archpriest George Larin5/22/2019 12:03 am
In the paragraph beginning: "While eulogizing Saint Peter the Apostle . . . the Patriarch mistakenly begins by saying: "St. P
×