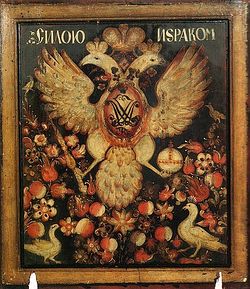 The double-headed eagle is a historical symbol of symphonia
Today at Acton University, Fr. Michael Butler examined the history of Church-State relations in the Orthodox Tradition with special reference to the modern, Russian context in his lecture “Orthodoxy, Church, and State.” The audio of his lecture will be available via Ancient Faith Radio sometime in the coming weeks. As a teaser, I would like to briefly examine two concepts of Orthodox political theory to which Fr. Butler devoted specific attention:symphonia and sobornost.

Due to the influence of Max Weber, symphonia is often mischaracterized as caesaropapism (a term he coined), the state in which a nation’s sovereign is supreme in all ecclesiastical matters as well as those of state. It would be, then, a complete absorption of the Church by the state. Actual historical instances of this would include (to varying degrees) the Church of England where the monarch is the head and Imperial Russia from Tsar Peter the Great’sWesternizing reforms to the Bolshevik revolution. In the latter case, as Fr. Michael noted, one can see a distortion of symphonia for the elevation of state power, but not its essence or, by far, the complete historical picture.

The origin of symphonia comes during the Byzantine Empire, most notably in the thought of the Emperor Justinian, who writes about the relationship between Church and state as follows:

If the one [the priesthood] is blameless in every respect, placing trust in God, and the other [the sovereignty] rightly and becomingly ornaments the slate delivered to him, there will be splendid harmony [symphonia] which will give to humanity whatever is for the best. (Novella 6)

It ought to be clear that while this outlines a closer relationship between Church and state than most would be comfortable with in the West today, it does not simply subjugate the Church to the state. Deno Geanopolis summarizes the historical reality as follows:

With the authority of the emperor over the church … restricted both theoretically and in actual practice to the administrative area of church polity and to certain liturgical privileges, we cannot speak of a truly absolute or Caesaropapistic master of the Byzantine church.

This model was one of distinction between Church and state, rather than conflation, and (ideally) a certain equality between the two, each with their own jurisdictions in a Christian Empire. Though Constantinople fell in 1453, the symphonic model and its checkered history lived on in Imperial Russia.

With the reforms of Tsar Peter the Great, however, the Church was literally made a department of the state. The inspiration for this, notably, was not symphonia but the European Protestant national Church model. While in this context the Russian Church still continued to carry out its functions in society, it had lost a great degree of autonomy. In the midst of this context, the Slavophile thinkers Alexei Khomiakov and Ivan Kireevsky reacted to this statist trend in Russian society by developing the theory of sobornost, inspired in part by the Russian word for “Catholic” in the Nicene Creedand inspired by the Orthodox Church’s conciliar basis of authority.

As they framed it, the idea of sobornost placed the idea of sovereignty in the whole of a people. All human beings are interconnected, and each therefore deserves their own autonomy while, at the same time, has a duty to serve all others. The Russian Philosopher Vladimir Solovyov sums up the concept well, writing that society ought not to abolish the individual, but rather “subordination to society uplifts the individual” and “the independence of the individual lends strength to the social order.” Ultimately, sobornost at its best would be an Orthodox parallel to subsidiarity in which each level of society, all the way down to the individual, has a role to freely play for the common good and each has a duty to assist others for that end.

The downside of the Slavophiles was that they tended to be Russian nationalists as well (with the exception of Solovyov, who might not qualify as a Slavophile in the first place). Indeed, Fr. Michael points to phyletism, the confusion of the Church with a nation or race of people as a persistent problem in modern Orthodoxy. As with many other traditions and even religions, there is always a danger of too closely associating one’s faith with one’s ethnic or national identity. Sobornost, it would seem, is not bound to the Russian nationalism from which it was born, but it is important to be aware of such shortfalls if we hope to affirm what is good and true in our own contexts.

The concepts of symphonia and sobornost, Fr. Michael argues, hold great potential for political theory, or at least Christian social thought more broadly. They do not have flawless histories, nor can they be perfectly applied to modern, Western democracies, but at their best they represent a careful and nuanced engagement with political theory steeped in the Orthodox Christian Tradition, with potential ecumenical and cross-disciplinary appeal as well.