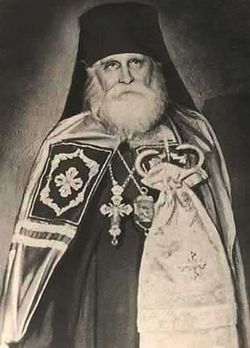 Friday, July 12, 2013, the feast of the Holy Leaders of the Apostles SS. Peter and Paul, marked the 35th anniversary of the repose of the ever-memorable Archbishop Andrei (Rymarenko) of Rockland, vicar of the Eastern American Diocese. As a Protopriest, Fr Adrian (in monasticism Andrei) founded Holy Dormition Convent "Novo-Diveevo" in Nanuet, NY. Archbishop Nikon (Rklitsky +1976 г.) recorded this history in his compilation, My Work in the Vineyard of Christ:

The idea to found Holy Dormition Convent – a "New Diveevo" ? in the United States was first conceived in 1946, with the arrival in America of new Russian emigres after the Second World War, by Bishop Seraphim (Ivanov) and Bishop Nikon (Rklitsky). Certain preparatory measures were taken by the Diocesan Administration of the North American and Canadian Diocese, but the founding of the convent itself was realized in the summer of 1949, with the arrival from Europe of Protopriest Adrian Rymarenko, later Archbishop of Rockland, with a group of loyal collaborators. It was namely Protopriest Rymarenko who was tasked by Archbishop Vitaly (Maximenko) with founding this convent under the supervision of his vicar, Bishop Nikon of Florida.

Fr Adrian accomplished this undertaking with great success, approaching his task with zeal and an experience and talent that came naturally to him. He himself came from a lay background; his father was an industrialist in Russia. Fr Adrian received his education in a Realschule [an advanced secondary school – ed.], as well as at the St Petersburg Polytechnical Institute. He was received into the priesthood in accordance with his own spiritual wishes, and during the first years of the Bolshevik Revolution, at a time of the brutal repression of the Church by the Bolsheviks. While still a student in St Petersburg, Fr Adrian occupied himself with religious issues and was a student of the renowned theologian Fr Ioann Yegorov; his spiritual formation was further influenced by the Optina Elders, with whom he corresponded. He had a close relationship with Elder Anatoly, a disciple of Elder Ambrose, with Elder Nektary and with the last Optina Elder – Monk Vikenty, who, after the destruction of the Optina Hermitage by the Bolsheviks, lived with Fr Adrian for some time. It was these gracious acquaintances, as well as Fr Adrian’s natural gifts, that gave him an opportunity to be an experienced spiritual leader and outstanding administrator and organizer. After the repose of Fr Adrian’s matushka, also a remarkable Russian woman, Eugenia Grigorievna, on October 1/14, 1963, Fr Adrian accepted monastic tonsure with the name Andrei, and in 1968 was consecrated Bishop of Rockland, vicar of the Diocese of Eastern American and New York. On Bishop Andrei’s 80th birthday, March 15/28, 1973, for his outstanding accomplishments, he was elevated to the rank of Archbishop of Rockland.

Under Fr Adrian’s direction, Novo-Diveevo convent underwent many stages of growth and development… Among Fr Adrian’s most active assistants were his matushka, Eugenia Grigorievna, and his longtime and loyal collaborators, who left Russia with him: Prince DV Mishetsky, Dr AP Timofievich, and choir conductor PP Didenko. Later, here in America, Fr Adrian would attract another young man, who is now an Archpriest at the convent and his irreplaceable assistant – Fr Alexander Fedorowski… 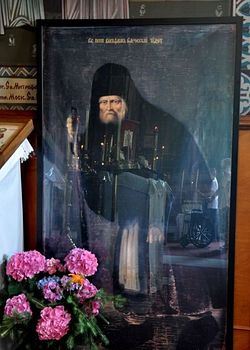 Novo-Diveevo Convent is located approximately 25 miles from New York, in the Spring Valley region, and is a large Russian spiritual center. It comprises close to 40 nuns [fewer today—ed.] and novices, and 40 residents in a home for the elderly. The convent has two wonderful churches – a small one in the house first acquired by the convent, and another of medium size, built by the monastics. Among the multitude of holy items kept in its churches, the most remarkable are: an icon of the Vladimir Mother of God, smuggled out of Optina Hermitage, and a portrait of Venerable Seraphim of Sarov in the smaller church, which was painted during the saint’s lifetime. The full cycle of divine services is served daily at the convent, while on Sundays and feast days many of the faithful gather there. The convent is also home to a quickly growing Russian cemetery, now numbering over 2,000 graves. The real estate acquired by the convent over the years is now valued at several hundred thousand dollars.

One no less remarkable feat of Archbishop Andrei’s was the construction at the convent in 1972 of a large building to handle the needs of the convent and serve as a home for elderly women… Now half of this spacious building accommodates the nuns, while in the other reside these elderly women, who are grateful to God and Archbishop Andrei for taking care of them in their old age, and all financial obligations are cared for.

It bears noting that, for all of his great accomplishments, Archbishop Andrei was not a well man – in recent years, he cannot even perform the divine services.

So it was that the evaluation given of Archbishop Andrei, then Protopriest Rymarenko, upon his arrival in America in 1949, that "his health is poor, and he is in no condition to undertake active work," was brilliantly disproved, while the words of God were confirmed: "for My strength is made perfect in weakness" (II Corinthians 12:9).

On the very day of the 35th anniversary of Archbishop Andrei’s blessed repose, the First Hierarch of the Russian Orthodox Church Outside of Russia, His Eminence Hilarion, Metropolitan of Eastern America and New York, came to Novo-Diveevo. The First Hierarch celebrated the Divine Liturgy, followed by a pannikhida at the grave of Archbishop Andrei. His Eminence was joined in the service by convent cleric Protopriest Alexander Fedorowski, diocesan secretary Protopriest Serge Lukianov, the convent’s Protodeacon Sergei Arlievsky, and Hierodeacon Tikhon (Gayfudinov; accompanying His Eminence). Also serving at the pannikhida was the dean of New England, Protopriest George Larin. The convent sisterhood, led by Abbess Irene, prayed at the divine services. 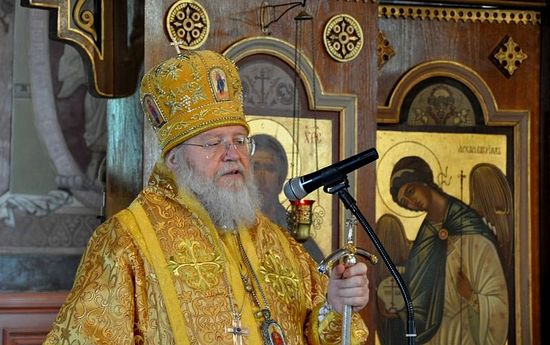 In his sermon after the Liturgy, Metropolitan Hilarion recalled the spiritual labors of Archbishop Andrei:

"Today we honor the memory of the ever-memorable Archbishop Andrei. It has already been 35 years since his blessed repose. He was the founder of this holy convent, and did much in his life for the salvation of others: gathering them together, nourishing them, preserving them from every adversity. Here he established a life in the Church, and was a spiritual father to many, having a connection with such spiritual luminaries as once existed in Russia – namely the Optina Elders."

Upon completion of the pannikhida, a festal luncheon was held in the parish hall. Memory Eternal to Archbishop Andrei! Irene (Diane) Granata6/22/2020 7:04 am
General comment. My dear friend, Irina Bergman (who escaped Russia with her parents)during the diaspora) is buried in the cemetery, I am almost sure. She lived in or near the convent in her late life until she died.
×