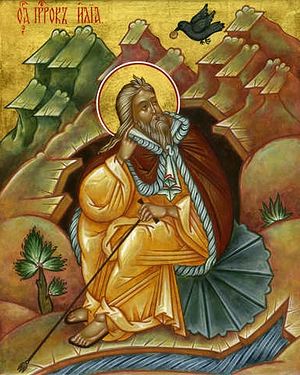 A man who saw God, a wonderworker and zealot for faith in God, Elias was of the tribe of Aaron, from the city of Tishba, whence he was known as "the Tishbite." When Elias was born, his father Sabah saw angels of God around the child, swaddling it with fire and feeding it with flames. This was a foreshadowing of Elias’ fiery character and his God-given fiery powers. He spent his whole youth in prayer and meditation, withdrawing often to the desert to ponder and pray in tranquility.

The prophet Elias came into the greatest conflict with the Israelite king, Ahab, and his evil wife Jezebel, for they worshipped idols and turned the people from the service of the one, living God. On top of this, Jezebel, being a Syrian, persuaded her husband to build a temple to the Syrian god, Baal, and appointed many priests to the service of this false god. Elias performed many miracles by the power of God: he closed the heavens, that no rain should fall for three years and six months; called down fire from heaven to consume the sacrifice to his God, while the priests of Baal were unable to do this; brought rain from the heavens at his prayers; miraculously multiplied corn and oil in the widow’s house at Zarephath, and restored her dead son to life; prophesied to Ahab that the dogs would lick up his blood, and to Jezebel that the dogs would devour her--which came to pass; and performed many other miracles and foretold many events.

He talked with God on Horeb, and heard His voice in the calm after the great wind. At the time of his death, he took Elisha and appointed him his heir as a prophet; he parted the Jordan with his mantle and was finally borne to heaven in a fiery chariot drawn by fiery horses. He appeared, together with Moses, to our Lord Jesus Christ on Mount Tabor at the Transfiguration. At the end of the world, Elias will appear again, to break the power of the antichrist (Rev. 11).

Incarnate Angel and summit of the Prophets,/ second forerunner of the coming of Christ,/ glorious Elijah sent down grace from on high to the Prophet Elisha./ He heals diseases and cleanses the leprous./ He pours healings on all who honor him.

O great Prophet Elijah,/ seer of God's mighty works,/ who didst halt the torrential rain by thy word,/ pray for us to the Lover of Mankind.