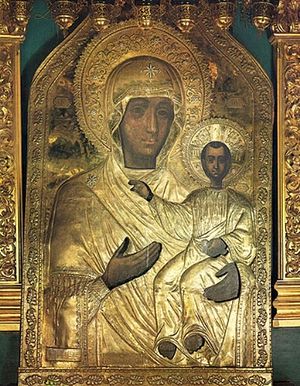 The miracle-working icon of the Smolensk Mother of God.
The Smolensk "Hodigitria" Icon of the Theotokos, or "She who leads the way," was, according to Church Tradition, painted by the holy Evangelist Luke during the earthly life of the Most Holy Theotokos. Holy Hierarch Demetrius of Rostov suggests that this icon was written at the request of Theophilus, the prefect of Antioch. From Antioch, the holy image was transferred to Jerusalem. From there, Empress Eudokia, the wife of Emperor Arcadius, gave it to Pulcheria, the sister of the emperor, at Constantinople. Pulcheria put the holy icon in the Blachernae Church.

In 1046, Byzantine Emperor Constantine IX Monomachos gave his daughter, Anna, in marriage to Prince Vsevolod Yaroslavich, the son of Yaroslav the Wise. He used this icon to bless her on her journey. After the death of Prince Vsevolod, the icon was given to his son, Vladimir Monomachos, who transferred it at the beginning of the twelfth century to the Smolensk Cathedral in honor of the Dormition of the Most Holy Theotokos. From that time onwards, the icon was known as the Smolensk Hodigitria.

In 1238, the Orthodox warrior Mercurius invaded the camp of Batu and killed many of the enemy. Having accepted a martyr’s death in battle, Mercurius was included by the Church in the ranks of the Saints.

In the fourteenth century, Smolensk came into the possession of the Lithuanian princes. Sophia, the daughter of Prince Vitovt, was given in marriage to Moscow Great Prince Basil Dimitrievich. In 1398, she brought the Smolensk Icon of the Mother of God with her to Moscow. The holy image was placed in the Annunciation Cathedral in the Kremlin, on the right side of the Royal Doors.

In 1456, at the request of Bishop Misael and the citizens of Smolensk, the icon was solemnly returned to Smolensk in a procession, with two identical copies remaining in Moscow. One was put in the Annunciation Cathedral, and the other, "a measure for measure," was put in the Novodevichi Monastery, founded in memory of the return of Smolensk to Russia. The monastery was built on Devichi Pole (Virgin’s Field), where "with many tears" the Muscovites handed over the holy icon to Smolensk.

In 1602 an exact copy was written from the wonderworking icon, which was then placed in the tower of the Smolensk Fortress over the Dneprovsk Gates, under a specially constructed cover. In 1727, a wooden church was built there, and in 1802, a stone church replaced the wooden church.

The new copy of the icon took on the power of the old image, and when the Russian armies left Smolensk on August 5, 1812, they took the icon with them in defense of the enemy forces. On the eve of the Battle of Borodino they carried this icon through the camp to encourage and inspire the soldiers. The ancient image of the Smolensk Hodigitria that was taken to the Dormition Cathedral on the day of the Battle of Borodino went in procession with the Iveron and Vladimir Icons of the Mother of God through the Belo and Kitai quarters and the Kremlin walls. It was then sent to the sick and wounded at the Lefortovo Palace. After leaving Moscow, the icon was taken to Yaroslavl.

These sister-icons were preserved, and the Mother of God defended Russia through Her icons. After the victory over the enemy forces, the Hodigitria Icon was returned to Smolensk together with its glorified copy.

The celebration in honor of this wonderworking icon on July 28 was established in 1525 in memory of the return of Smolensk to Russia. There exist many venerated copies of the Smolensk Hodigitria, for which the celebration is set on this day.

On November 5, a day of celebration for the Smolensk Icon is also celebrated commemorating when this image was returned to Smolensk on the orders of the commander-in-chief of the Russian army, M. I. Kutuzov. In memory of the expulsion of the enemy from Russia, it was decided to celebrate this day annually at Smolensk.

The holy icon of the Hodigitria Mother of God is one of the chief holy objects of the Russian Orthodox Church. Believers have received and continue to receive abundant grace. Through Her holy icon, the Mother of God intercedes for and strengthens us, guiding us on the way to salvation, and we call out to Her, "Thou art the All-Blessed Hodigitria for faithful peoples, Thou art the affirmation, the Praiseworthy of Smolensk and all the Russian land. Rejoice, Hodigitria, salvation of Christians!"

Let us sinners and wretched ones  Now run most earnestly to the Theotokos.  And let us fall down in repentance  Crying out from the depths of our souls:  O Sovereign Lady, having compassion on us, help us, and come quickly  For we are perishing from a multitude of transgressions.  Turn not away your servants empty-handed,  For we have you as our only hope.

Steadfast Intercessor of Christians,  Constant advocate before the Creator,  Despise not the voices of praying sinners:  But like the good One come speedily  To help us who faithfully call upon you  Hasten to our prayer,  And intercede for our petition,  For you, O Theotokos, ever intercede for those who honor you.