Father Anatoly, by his stooped outward appearance, his manner of coming out to the people in a black half-mantle, and his intense joyfully-loving and humble attitude towards people, reminded one of St. Seraphim of Sarov.

Batiushka Anatoly was remarkably simple and good. All who came to him experienced the happiness of being as if caught under a golden, grace-filled rain. Merely approaching this elder already gave him a sort of miraculous opportunity for purification and consolation. 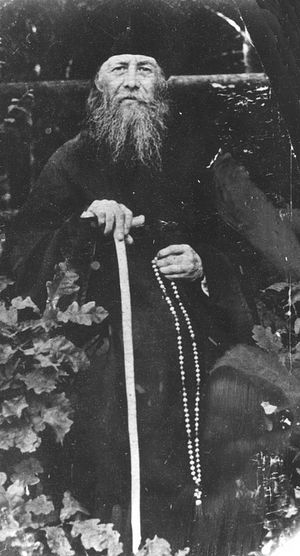 August 12 is the commemoration day of Venerable Anatoly (Potapov), one of the last of the Optina elders. In contrast to the preceding Optina saints, there was no one left to compose the life of this elder after the Revolution. There remained only fragmented memories of pilgrims, notes of spiritual children, and letters of the elder, in which biographical details were often lacking, but in which his image rises up brightly and vividly. We honor the memory of the elder and reminisce with these recollections.

Venerable Anatoly, like Venerable Sergius of Radonezh, perfectly fulfilled the commandment of God to honor one’s parents, putting aside his desire to enter a monastery until after the death of his mother. The future elder, named Alexander before the tonsure, entered Optina Monastery on February 15, 1885--his thirtieth birthday. He was appointed to live in the skete [of St. John the Forerunner] as a cell-attendant of Elder Ambrose, together with monk Nektary, who would also later become an elder.

Novice Alexander witnessed the great elder Ambrose’s spiritual labors and the last years of his prophetic ministry, when “all of Russia” streamed to his humble abode in the skete. As a candle is lit from another candle, Father Anatoly received from the great elder the grace of eldership. While still his cell-attendant, the novice was already displaying the grace-filled gifts of clairvoyance and love.

Archpriest Sergei Chetverikov, one of the chroniclers of Optina, recalled: “While still in the rank of hierodeacon, in 1905, he was already attracting the notice and hearts of pilgrims by his loving attention to their sorrows and laments.

Memories about the first steps of Father Anatoly on the path of eldership were preserved by the village schoolteacher Nina Vladimirovna:

“Once we invited our acquaintance, Olga Konstantinovna Kesareva, the wife of a priest, on a trip to Optina with us… She agreed grudgingly: “Well, what do we have nowadays at Optina! There used to be elders, but not anymore!”… A few days passed, and she decided to go for a walk. Elegantly dressed, with a hat and a red scarf, she approached the skete and sat down with a book on the steps of the elder’s “hut.” The cell-attendant came out with a bucket to get water from the well. “Where are you from, servant of God?” he asked humbly and tenderly. “Here they are, the vaunted monks, pestering with questions,” thought the lady angrily and turned away in prideful silence. But the monk Alexander, having collected water from the well, again approached her. Then he began to narrate to the servant of God who she is, where she was from, and remind her of things she would have liked to have forgotten altogether. “Ugh,” thought the lady, “that chatterbox Maria Mikhailovna (her companion) blabbed all about me here.” Then Father Alexander started telling her things that not only Maria Mikhailovna, but not even another living soul knew about. At that point, Olga Konstantinovna realized that before her stood an extraordinary person. She fell to her knees in front of him and rapturously exclaimed, “You’re a saint!” From that point forward, she began to have a different attitude towards Optina monks; she took off her flashy attire, covered herself with a headscarf, and became an obedient disciple of Batiushka.”

On July 4, 1908, in the “Chronicles of the Skete of Optina Monastery” was written the following:

“Today, following the refectory meal, the hieromonk from the skete, Father Anatoly, bid farewell to the brethren of the skete. He was transferred according to the orders of the Father Superior to the monastery, assigned as confessor of laypeople who come to Optina Hermitage on pilgrimage.”

Thus, Father Anatoly resettled in the monastery, in a cell attached to the Church of the Vladimir Icon of the Mother of God. Batiushka received all without time limits, despite the endless fatigue, excruciating pain from a strangulated hernia, and pain in his bleeding legs.

Confessions with the elder renewed and revived. “With concentration and reverence, monks approached the elder one after another. They would kneel down, receive a blessing, and exchange with him a few brief words. Some would be quick, but others would take longer. It could be felt that the elder acted with fatherly love and authority. Sometimes he would use external methods. For example, he would sometimes strike the forehead of a monk bent before him, likely repulsing the attack of intrusive thoughts. Everyone would leave soothed, at peace, and consoled. This took place twice a day, morning and evening. Truly, “life” at Optina was without sorrow, and indeed, all the monks were tenderly affectionate, joyful, or deeply immersed in prayerful concentration. One needs to see with his own eyes the results of revelation of thoughts to understand its significance,” wrote I.M. Kontsevich.

A multitude of cases testifying to the clairvoyance of the elder are known. To many, he foretold future events in their lives. To a priest, he foretold his future place of service. To a nun, he foretold that she would go to Italy. One woman came with her son Dimitry, and the elder wanted to bless him with an icon of Great-martyr Dimitry of Thessalonica, but all of a sudden he said to himself, “No, not that one,” and blessed him with an icon of Saint Dimitry Donskoy, whose name the boy bore.

One day a peasant who had fallen into a serious predicament came to Elder Anatoly. He and his family had been left without a roof over their heads, and he had only 50 rubles to his name. He had no where to go for help. In his grief he had fallen into despair; he began to mollify himself as they do in the villages--resolving straight off to drink away the last of his money, leave his wife and children, and go to Moscow to work as a simple laborer. Before doing this, he decided to go see Elder Anatoly. The elder blessed him and said, “Don’t be discouraged; in three weeks you will enter your own home.” And so it happened. By the prayers of the elder, the Lord helped him to both buy a house and to become a different person.

Like all the Optina elders, Father Anatoly had the great gift of healing, but did it covertly, sending the sick, as a rule, to the spring of St. Paphnutius of Borovsk, the grave of elder Ambrose, or through some other place. One spiritual daughter related how Batiushka once gave her a pear to give to her brother. She wondered why specifically it was being sent to her younger brother, but when she arrived she saw that her little brother was very sick, and the doctors said that there was little hope. He began to eat the pear in little bites and soon recovered. Another spiritual daughter related how she recovered from an illness after having covered herself with a cassock given to her by Batiushka.

St. Anatoly was destined to become a witness of the frightening prophecies of the Optina Elders. On January 23, 1918, by the decree of the Council of People’s Commissars, Optina Monastery was officially closed. The monks were exiled, arrested, and mocked. In 1919, the Father Superior of Optina Monastery, Father Isaac II, was arrested for the first time. With each passing day came increasingly troubling news and frightening rumors. The elder nevertheless maintained astonishing calmness, thus encouraging the monastic brotherhood.

When his spiritual children suggested to Elder Anatoly that he temporarily leave Optina, he responded with a resolute refusal, “What? Leave the holy monastery, at such a time? Everyone will take me for a coward and say, “When life was good, he would say: bear patiently and God will not abandon you. But when the ordeal came, he was the first to flee.” If they pursue us, then I’ll leave the holy monastery, when no one is left. I will leave last; I’ll pray and venerate the relics of the holy elders, and then I’ll go.”

After the monastery closed and was reorganized as a collective farm, the elder was arrested. On the way to prison, he fell seriously ill, and mistakenly taking him to be suffering from typhus, they cropped his hair and his beard. He returned to the monastery completely exhausted, barely alive, though with a bright smile and giving thanks to the Lord. When they saw Batiushka shorn, many did not recognize him, but then they became very sad. Cheerful Elder Anatoly entered his cell, crossed himself, and said, “Glory to Thee, O God! Glory to Thee, O God! Glory to Thee, O God!” Then having looked around at everyone he added, “Look what a youngster I am!”

Later, he talked about his trip to Kaluga, “Oh, how good it is there! What good people! When we were on the train, I was vomiting. We reached the place by foot, and there Vladyka Micah for some reason began to demand a horse. Why did he think that up? All the brothers left, but we sat in the investigation room. People were smoking; it was stuffy. My vomiting got worse, and they sent me to a hospital, thinking that I had typhus. There they cropped my hair, but that’s nothing--it’s so much easier this way. The doctor, such a nice man, said that by mistake he considered me to have typhus and ordered the cropping, but he was very apologetic. What a nice man! And the guard at the hospital was also very nice… The nurse was also very nice; she had been to Father Ambrose… Yes, good people, good…

You know, the one who arrested me later said that he had arrested me by mistake, asked me to forgive him, and even kissed my hand. I said that it was nothing and that I was very happy that I went to Kaluga.” The elder described his prison trip to Kaluga--accompanied by KGB guards, abuse, and onerous suffering--without murmuring or condemning, with childlike good-nature and kindliness. 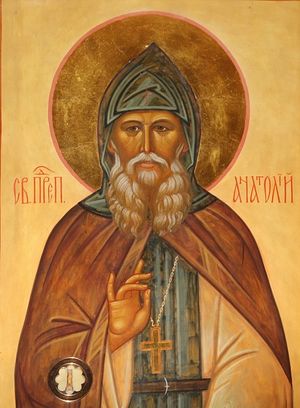 On July 29, 1922, the emergency commission arrived at the monastery. The elder was interrogated for a long time and they wanted to take him away. Batiushka maintained a peaceful disposition of spirit and humbly requested to postpone the arrest by one day so that he could prepare for the journey. The Chekists agreed and threatened his cell-attendant so that the next day the elder would be definitely ready to go. After that, St. Anatoly retired to his cell and in prayer committed his soul to God.

The next morning the commission returned. They asked his cell-attendant, “Is the elder ready?” “Yes,” he answered, “he’s ready,” and he opened to the visitors the door of the cell, where the body of the reposed elder already lay in his coffin. Thus the Lord miraculously called to Himself His faithful servant, who had kept all His commandments and precepts, and vouchsafed him on his last night to prayerfully prepare himself for his final journey, not allowing any outrage to be committed upon His chosen vessel.

The elder was vouchsafed to be buried beside his great teacher, St. Ambrose, on the very spot where he wanted to be buried. Two weeks before his departure, he had stood for a long time repeating, “And here... why, it’s quite possible to place yet one more. There’s space for exactly one more grave. Yes, yes, exactly…”

According to the testimony of eyewitnesses, for a few days after the burial, the grave of Elder Anatoly gave off an indescribable, fragrant aroma.

Holy Father Anatoly, pray to God for us!