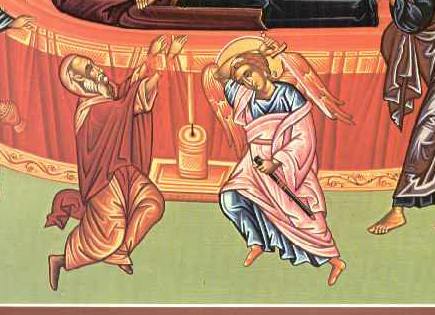 In many icons of the Dormition of the Theotokos, one can see a strange scene near the bottom: an angel invisibly cuts off the two hands of a certain man.

What is the story behind this scene?

Bewailing their separation from the Mother of God, the Apostles prepared to bury Her all-pure body. A solemn procession went from Zion through Jerusalem to the Garden of Gethsemane. Unbelieving inhabitants of Jerusalem, taken aback by the extraordinarily grand funeral procession and vexed at the honor accorded the Mother of Jesus, complained of this to the High Priest and scribes. 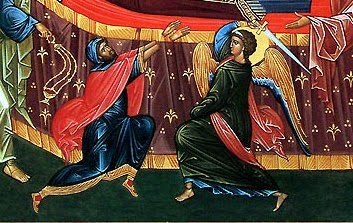 According to Elisheva Revel-Neher, in her study of "The Image of the Jew in Byzantine Art", the earliest known artistic depictions of the scene are from Cappadocia around the ninth and tenth centuries, with subsequent examples from much later periods.

The Theotokos is all-pure and ever-virgin, and her conception of the Son of God was foreshadowed in the Old Testament by the Ark of the Covenant. The procession of the body of the Theotokos by the Apostles is thus also seen as a foreshadow of a particular event in the Old Testament, when the Ark of the Covenant was captured by the Philistines, and eventually brought to Jerusalem.

Here the pagan god Dagon is depicted as not being able to stand in the presence of the Ark, to the point that it fell and its head and hands broke off. Numerous other disasters were said to have befallen the Philistines for stealing the Ark, until they finally gave it back to the Jews out of fear. 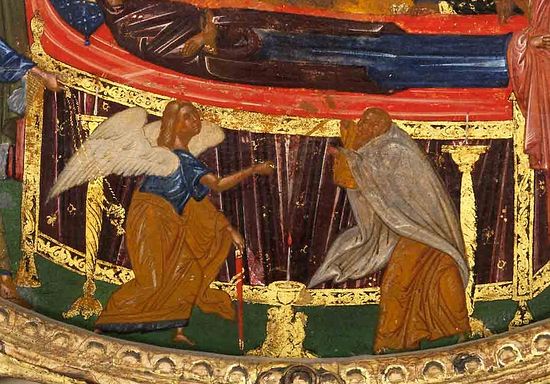 Years later King David desired to bring the Ark to Jerusalem, and a great procession followed the Ark. In 2 Samuel 6:3, 4, 6 and 7 we read:

They set the ark of God on a new cart and brought it from the house of Abinadab, which was on the hill. Uzzah and Ahio, sons of Abinadab, were guiding the new cart with the ark of God on it, and Ahio was walking in front of it... When they came to the threshing floor of Nakon, Uzzah reached out and took hold of the ark of God, because the oxen stumbled. The Lord’s anger burned against Uzzah because of his irreverent act; therefore God struck him down, and he died there beside the ark of God.

This incident is said to have struck fear in the heart of King David, and it made him realize how great and significant the Ark of the Covenant truly was.

This iconographic scene in the icon of the Dormition, therefore, is an illustration to serve as a warning to believers and unbelievers who question and despise the mysteries of God, and do not hold the proper reverence for these sacred mysteries. 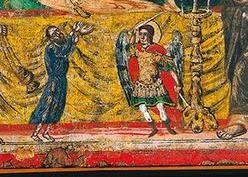 A miracle recorded by St. John Moschos in The Spiritual Meadow(Leimonarion) further details the moral described above. It concerns a certain actor named Gaianas who blasphemed the Holy Mother of God in the theatre. He writes:

Heliopolis is a city of Lebanese Phoenecia. There was an actor there named Gaianas who used to perform at the theatre an act in which he blasphemed against the holy Mother of God. The Mother of God appeared to him, saying: "What evil have I done to you that you revile me before so many people and blaspheme against me?" He rose up and, far from mending his ways, proceeded to blaspheme against her even more than before. Three times she appeared to him with the same reproach and admonition. As he did not mend his ways in the slightest degree, but rather blasphemed the more, she appeared to him once when he was sleeping at mid-day and said nothing at all. All she did was to sever his two hands and feet with her finger. When he woke up he found that his hands and feet were so afflicted that he just lay there like a tree-trunk. In these circumstances the wretched man confessed to everybody (making himself a public example) that he had received the reward for his blasphemy. And this he did for love of his fellow men.