On Music, Art, and Theater

From the legacy of the Optina Elders 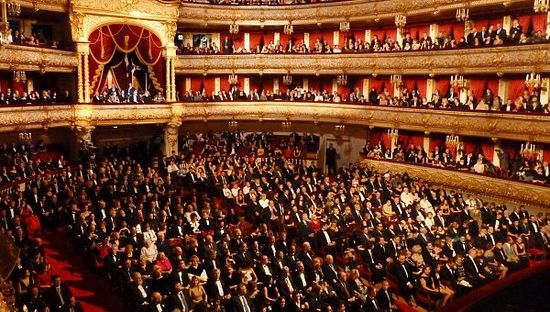 The Optina elders expressed their opinion about lay people visiting the theater, about the passion for reading novels, exhilaration over the canvases of painters, the longing to listen to music for hours or even constantly.

Avoiding harm to the soul

Rest is necessary, but hobbies, according to the counsel of Elder Barsanuphius, should be chosen very carefully so as to not harm the soul. The elder cited an example of the sinless relaxation of saints:

“One day, the Holy Apostle John the Theologian was sitting on the porch of his house with a little bird in his hands. A passerby was surprised and said:

“‘What are you doing? You caught a bird and are petting it?’

“The Apostle answered, ‘You are a hunter; you probably have a bow and arrows. If you overstretch the bow, what will happen to it?’

“‘It is same for us: a person cannot practice only the spiritual. He will not endure; he will break,” explained Apostle John the Theologian.

“Everything must be done with discernment, or else it will be zeal not according to knowledge.”

Don’t forget about the heavenly world

Elder Barsanuphius explained that it is not a sin to enjoy the beauty of nature; this innocent consolation was given to man by the Lord Himself, but “the present world bears only a faint resemblance to the world that existed before the fall,” and we must not forget about the heavenly world, where the “supreme blessedness” is:

“True, there are earthly joys which elevate the soul. There is no sin, for example, in enjoying the beauty of this world. On the earth there are extraordinarily beautiful places… Comely also is our northern landscape. Turgenev vividly and brilliantly described it in his works. He, by the way, was at Optina and admired the beauty of our monastery. But the present world bears only a faint resemblance to the world that once existed before the Fall. There is a heavenly world, the beauty of which we cannot fathom, and only holy people perceive it and enjoy it. That world remained unharmed, but the earthly world changed dramatically after the Fall.

It’s as if someone split up the finest musical composition, for example Beethoven’s, into different keys; the complete experience would then fail to take place. Or, if a painting, for example Raphael’s, was ripped to shreds and we studied the individual pieces. What would we see? Some finger here, on another scrap a piece of clothing, etc., but the majestic effect that Raphael imparted to the work, we of course would not perceive. Break up a magnificent article into pieces and a beautiful impression is not achieved. It is the same with the present world.”

St. Anatoly (Zertsalov) warned about excessive worldly pleasures in a letter to a spiritual daughter. Music and theater, dances and balls entertain, and because of entertainments, people forget about spiritual life, which is nothing other than the salvation of the soul:

“There you are always dancing. I … wanted to point out to you Krylov’s fable, ‘The Dragonfly and the Ant.’ It is appropriate for you. She (the dragonfly) also loved Maslenitsa1 and didn’t care for fasting–-just dancing. I say this not to reproach you, but so that you know the real state of things and as occasion offers, you would know not to lose your head; that is, that you would remember that after sweets, enervation, after worldly fun, boredom, after satiety, heaviness and even disease, all follow like the shadow after the body. Although a tooth is strong, in those who eat too many sweets it weakens and crumbles like sand.

“And Krylov, a secular writer, said his ‘Dragonfly’ is not only for you and me, but for the whole world; that is, he who dances the summer away will do poorly in the winter. He who in the flower of his age does not want to busy himself, has nothing to expect when his strength is exhausted and he is beset by infirmities and illnesses.”

St. Barsanuphius also reminded us about this:

“Secular entertainments completely whirl a person about, not giving him time to think about anything spiritual; and after passing the time like this, the soul is left with emptiness. All the vain conversations come to mind, the unrestrained manners, women’s infatuation with men, and men’s with women. Such an emptiness remains not only from sinful pleasures, but also from those which are not so sinful. What if, in the midst of such entertainments, one is summoned to the Lord Himself? The word of the Lord says, “In what I find you, in that will I judge you.” Therefore, such a soul cannot go to the dwelling place of light, but to the eternal darkness of the underworld. It is frightening to think about! Indeed, it is for all eternity!”

From the point of view of usefulness for the soul

The Optina elders did not reject art but examined it from the point of view of usefulness for the human soul, from the point of view of salvation. The elders criticized only those works of art which inflame the human passions, and bind the heart to earthly created things rather than lifting them up to the heights, to the spiritual. St. Barsanuphius appreciated the type of art that would tear the soul away from everyday trifles and direct it towards God:

“Poetry and art tear the soul away from everyday trifles and give a person aesthetic delight. In the eighteenth century, under the expansion of a materialistic trend, a view emerged that poets and artists are useless people, that they just sit and don’t do anything.

“Victor Hugo said in defense, ‘Gazing at the sky is already an accomplishment.’

“Serious music, like that of Mozart, Beethoven and others, acts in a refining way on the soul; often under its influence one wants to weep and pray.”

St. Barsanuphius said that to understand serious music it’s necessary to have artistic taste, and he recalled the following event:

“In one rich family there was a party. During the party a talented young lady performed one of the best works of Mozart amazingly well. Everyone was delighted, but by the doorway stood a lackey, who, having served cigarettes and in general having finished serving the guests, simply yawned: ‘And why do the gentle folk listen to such boring music? Now if they had been playing the balalaika…’

“He was correct in his judgment, as serious music was incomprehensible to him. In order to understand a work of earthly art it is necessary to have artistic taste.”

Elder Barsanuphius reminded people that in works of art, our soul seeks “expressions; within beautiful art forms, the beautiful unseen world, to which the soul is attracted by the influence of the spirit.” The elder asserted that in artists there is always a “spark of religious mysticism,” and during his whole life he only liked those people and conversations which awakened the highest ideals of aspiration:

“In the souls of artists there is always a streak of asceticism, and the greater the artist, the brighter in him burns the flame of religious mysticism.”

“Throughout my life, I observed in myself that I always liked only those people and conversations which aroused in my heart the highest ideals of aspiration, which had in their foundation faith in the immortality of the human soul, faith in truth, goodness, and beauty. On the contrary, antipathetic to me were always people whose thoughts and conversations revolved only around one order of life: the temporal and external. This aspiration towards the supreme, the ideal, was expressed in my soul by an inclination to all that was mysterious and mystical in life.”

The elder compared some artists to those who come to church but stop at the doorstep, not entering in. He lamented about those who were given so much, whose souls flare up from the smallest spark, but they “do not fan that spark,” do not toil in the fulfillment of the commandments:

“The vast majority of our best artists and writers can be compared to people who come to church after the service has already started and the church is full of people. Such people stand at the entrance; yes, to enter is difficult, but they don’t even apply any efforts to do so. A small part of the divine service reaches their ears: the Cherubic Hymn, “We praise Thee,” “Lord, have mercy”. They stand like that for a while, then a little while more, and then leave, not having actually been in the church… Their souls, like dynamite, flare up from the smallest spark, but unfortunately, they don’t fan that flame, and it burns out.”

Everything should be done as if before the gaze of God

“It is permissible to engage in art, as in any other occupation, such as felling timber or grazing cows; but everything should be done as if before the gaze of God. There is higher art and there is petty art. Petty art happens in this way: there are sounds and light. The artist is a person who is capable of perceiving these hardly perceptible colors, shades and inaudible sounds. He translates his impressions onto canvas or paper. Paintings, sheet music or poetry are produced. Here sounds and light are, as it were, killed. From light remains color. A book, sheet music or a painting are something like tombs of light and sound.

“Then comes a reader or a viewer, and if he is able to see, to read creatively, then a resurrection of the meaning takes place. Then the circle of art is completed. Before the soul of the viewer and reader the light flashes up; the sound becomes audible. Therefore, an artist or poet has nothing in particular to be proud of. He only does part of the job. In vain does he imagine himself to be the creator of his works; there is one Creator; people only kill the words and images of the Creator, and then they are revived by the power of the spirit, which is received from Him.

But there also is the higher art: the vivifying and enlivening word (for example, the Psalms of David). The path to this art lies through the personal struggle of the artist--it is a path of sacrifice, and only one out of many attains the goal…”

Holy Fathers, Elders of Optina, pray to God for us, sinners!

1 The week before Great Lent, also known as Cheese Fare Week. In the West, this time is often known as Mardi Gras.

Lisa9/5/2013 6:32 am
Thank you so much for this article. I studied fine art (contemporary sculpture), but after finding Orthodoxy, it became clear that it was so vain in many ways, even empty. I'm struggling and learning to find that path of meekness in artistic expression. Writing has become my favorite lately, but still have a lot to learn...

It's cool but this quote come from variety of different saints already, you can read it in desert fathers sayings too, and originally it's in apocryphal jewish midrash.
×