SOURCE: The Russian Orthodox Church Outside of Russia

With Abbot Hilarion’s blessing, I would like to say some words that we feel are important to say on this day. 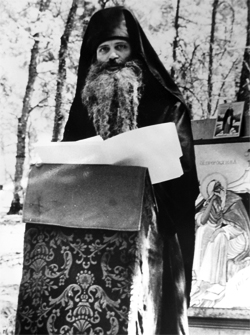 After Fr. Seraphim’s repose, it was not just logistical reasons that prevented the First Hierarch of the Russian Church Outside Russia from coming here. The reasons are painful to relate, but we feel that we should talk about them, and that the appropriate time is precisely today, on Fr. Seraphim’s 30th anniversary, when a First Hierarch of the Russian Church Abroad is here for the first time.

For seventeen years our brotherhood wandered in the wilderness, but by the Grace of God we finally saw the light: We understood that Fr. Herman had not been unjustly persecuted, and that it was in fact we who had unjustly attacked the good name of Archbishop Anthony and the Russian Church Abroad. Together with this, we realized that, contrary to the false ecclesiology we had been led to believe, we were in fact outside the canonical boundaries of the Church. We realized that no schism from the Church is justified, and that we had to find our way back home to the Church.

Also, by God’s mercy, we were able to apologize via letter to the then-First Hierarch of the Russian Church Abroad, His Eminence Metropolitan Laurus of blessed memory. Finally, we were able to apologize in print, first by publishing a revised version of Fr. Seraphim’s biography with the faults that marred the first version removed, and then by publishing an apology and retraction in The Orthodox Word.

However, it’s not until today that we have had the opportunity to apologize, in person and at a public event, to the First Hierarch of the Russian Church Abroad for our sins against the Russian Church Abroad. Your Eminence, Metropolitan Hilarion, we express our deep and heartfelt repentance for these sins, and ask forgiveness from you and from all who have been hurt by our words and actions.

This has not been a pleasant topic to talk about, but, as I said, we feel it is a necessary one. We were delivered by God from our wandering in the wilderness, but we still bear wounds from that time, for which we still seek healing from God, and we realize that others outside our monastery bear those wounds, as well. May our Lord help to find further healing, and may He help us to go further on the path to salvation in repentance and in thankfulness to Him for His merciful Providence.

Seraphim Barry10/8/2017 8:16 am
We all make mistakes, what is important is that you saw your errors and made ammends. God forgives, and the Church does too. May we all have the opportunity to be lead out of the desert, out of the dark night of our souls.

Fr Brendan Pelphrey9/5/2013 4:14 am
Reading this brought tears to my eyes. Many years ago, when "Not of This World" was first published, I was asked to review the book; and I was deeply disturbed by the subtext which suggested that the hierarchs were unfair and wrong. I can only pray that I would, myself, be so aware of wandering from the right path and of slandering anyone, whether by accident or because I believed I was in the right. May God bless Hiermonk Damascene and all those with him. Fr Brendan
×