A Prophetic Minority: What American Christians Can Learn from Jeremiah 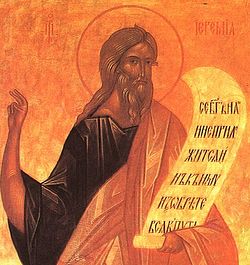 Prophet Jeremiah
Russell Moore, incoming president of the Southern Baptist Convention’s Ethics and Religious Liberty Commission, says that Christians’ place in America is no longer about a being moral majority but a prophetic minority. He’s right. Not long ago I wrote about three reasons religious freedom matters: freedom of conscience, dethroning the state, and at the point where these two intersect, speaking truth to power. This voice of truth is the Church’s prophetic ministry.

We have been accustomed to being something like a moral majority; we must discover now what it means to be a prophetic minority. There may be no better teacher for us than Jeremiah. I’ve been spending much time with Jeremiah lately, though I must admit I’ve had difficulty getting past the first several chapters. They sound too familiar; too much like the world we live in; and therefore too troubling to hurry through.

The Bible reveals more of Jeremiah’s biography and heart than perhaps any other prophet’s. He felt unequipped for his calling (1:6), but he obeyed God’s call on the basis of God’s promise to be with him and deliver him (1:7f). He urged his countrymen to repentance, and wept at their refusal (8:18-9:2). There were times he wanted to hide himself away from it all (9:3).

His message was for the people of God, those called by God’s name. It was a disturbing warning of that which seemed impossible for the land of the Temple of the Lord (7:4), where the leaders would say, “We are wise, and the law of the LORD is with us” (8:8), and where the experts cried out, “All is well!” (6:14).

But the leaders had “healed the wound of my people lightly, saying ‘Peace, peace,’ when there is no peace” (6:14, 8:11). Their religious pride only added to their guilt, as they refused to turn their hearts toward God (7:22f). So while they stood calm in their confidence, God was sending a warning. They ignored it (6:17), but disaster was on its way regardless.

The parallels with America today are more than disturbing.

“We are wise, and the word of the sociologists and psychologists is with us”—for this is where we look for our wisdom; and the social scientists have found no reason (they say) to doubt the goodness of open sexual relationships and devalued “marriage,” straight or gay.

"We are wise, and the word of the scientists is with us”—for this is where we go to find answers even for non-scientific matters, including, notoriously, the worth of the unborn.

“We are secure,” for economic data released August 15 indicates the U.S. economy “appears to be strengthening." But this is an absurdly light healing of our wounds. Public debt is approaching $17 trillion, and growing by a trillion a year, according to White House numbers. Can strength be sustained that way?

Our economy was stricken in 2008, the result of foolish and unrestrained accumulation of debt. We patched up a few holes in the consumer and business economy, and kept on accelerating the growth of public debt. Our refusal to take correction from warnings like 2008 will yield poisonous fruit in years to come. Does anyone doubt it?

Of course it’s appropriate to question whether Jeremiah’s warnings can legitimately be applied to America. We are by no means the people of God as the Israelites were then—even if some teachers tell us America was founded as something like a Christian nation. The links between his day and our own are found not so much in the details as they are in the ethos, perhaps best summed up in God’s plaintive question through the prophet:

“What wrong did your fathers find in me
that they went far from me,
and went after worthlessness, and became worthless?”

Does any believer doubt that America has gone far from God, and gone after worthlessness? What fault did we find in God, that we would be so foolish?

Called By His Name

There is in fact one sense in which our connection with the historic people of God cannot be denied. Functionally, in the eyes of the world, we are a people called by God’s name. The Islamic nations, we’re told, think of America as a Christian country, and they wonder at our failure to live accordingly. Ask anyone outside the U.S. to name the one country in the world that is most likely to be called a Christian nation, and you can count on them naming America. Unlike many other nations, we have never elected a head of state who did not profess allegiance (in some manner, at least) to Christianity.

Thus, for all it may frustrate the secularist, and no matter what anyone might say about our Christian (or otherwise) founding, the name of Jesus Christ is inextricably linked together with the name of our country. If God is zealous (and jealous) for the holiness of His name—and He is —then it seems at least plausible to think He would have special concern for the way His name is treated here in America.

But that is speculative. The Church’s responsibility to take up the prophetic mantle is not: It has been the Church’s calling from the beginning. It is nothing to be borne lightly. For Jeremiah it was a horribly painful calling: “My anguish! My anguish! I writhe in pain! Oh the walls of my heart!” he cried in 4:19.

His prophetic career took him from the halls of power to the literal pit, and finally to blindness and captivity. Still his cry was always for his people and the honor of God’s name. One never finds him demanding of God, “Is this what you meant by being with me and delivering me?” In chapter 15 he laments his birth; significantly, he does not resent his Lord. Instead he stands steadfast, while his nation’s economy and his freedoms crumble around him.

We may have the opportunity to trust God in like manner before long. Of course I do not know that for sure. To see into the future is either a gift from God or the practice of insight. The former is a prophetic gift held by few of us in these days. The latter need not be so hard to find.

There are timeless principles in play: The land that overspends its present will pay its debt in the future. The land that destroys the family destroys the foundation of its culture. The nation that restrains the Church’s voice muzzles its own conscience. The land that relies on its fading heritage, its God-denying expertise, and its pride of position, and thinks that disaster cannot come upon its own shores, is naive to the point of foolishness.

To Learn the Prophetic Calling

Jeremiah, like other Old Testament prophets, demonstrates how heavy the prophetic calling can be. Zechariah (9:1, 12:1, NASB) spoke of his message as “the burden of the word of the LORD.” Will we accept the burden? Will we speak truth to those who must hear it? Will we do it with Jeremiah’s steadiness, and his tears?

And will we do it also with his hope? For as our Lord told the Israelites, his plan was for a future and a hope (29:11). This was in context a promise to Israel, yes, but it is hard to believe God would deny at least this much of His promise to anyone who seeks Him in any day:

“Then you will call upon me and come and pray to me, and I will hear you. You will seek me and find me, when you seek me with all your heart.”

And we have so much more reason for hope than Jeremiah ever knew! For all that we can learn from him, the one great difference between him and us is that we stand on opposite sides of the cross. We can look back in history to see God's great act of forgiveness and reconciliation with His people.

In Christ our burden is made light (Matthew 11:28-30). The Good Shepherd has lain down His life for His sheep (John 10:11). By His death and resurrection He has overcome this world of trouble, so we can take heart (John 16:33). We can experience His life, and share in His hope and joy.

We are the prophetic minority. It is a new thing for us, and it is a paradoxical mix. I have spoken of tears and truth, of disaster and delivery, of warning and hope, and ultimately of life and joy.

We have a lot of learning ahead of us, to discover what it all means. It’s time to get at it.

Scripture quotations are from the ESV except where noted. Image courtesy of Cyberbrethren.

Michael9/20/2013 5:54 pm
Not only in America but all over the world, believers have to undergo a continuing, on-going conversion to the Gospel.It can involve serious struggle. There's something in every culture that has not yet been brought fully into submission to Christ.
Yes, there are gigantic beams in Americans' eyes, but are there not also at least a few splinters in the eyes of other people? Of course there are...and sometimes they are in the eyes of the very people who are in denial about it. That was one of the Pharisees' problems.

David Lane9/6/2013 1:14 am
Funny this piece should appear on my Facebook page this day. I happened upon Jeremiah this morning and made a similar observation myself.
I also believe that if this nation continues to resist the tug of the Holy Spirit that like Isreal this nation will feel God's wrath.

It must be pretty hard for a Protestant [a heretic to begin with] to want to preach to Russia, when his own country is incomparably worse than the one he goes to.

He is also decidedly, comically even, insulated if he thinks that when people are asked to name a Christian nation they reply "the United States of America." Besides Russia, which the Muslim world has in the last few years come to know is definitely, actually [Orthodox and not heretics] and forcefully Christian: - Italy, Poland, Spain even Mexico are likely responses. More likely than "America".

The United States is associated rather with such ideologies as materialism, commercialism, capitalism, liberalism, atheism, agnosticism and ectera.

No one thinks America is Christian except American Protestants - and it looks like even they are at last cured of the illusion.
×