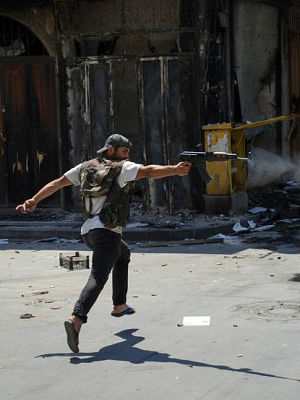 While they are faithful to Syrian President Bashar al-Assad, the army does protect the Christian minority in Aleppo. Once they are driven out, Reverend Moussalli warns - the Christians face a certain massacre.
According to Moussalli, roughly 200,000 Christians still reside in the war-torn streets of Aleppo. He warns that if the Syrian Army retreats due to attacks by Islamist rebels, the Christians "will be massacred."

Moussalli is the patriarchal vicar of the Chaldean Catholic Church in Jordan, which borders Syria on the south. He has spent many years attending to the spiritual needs to Christians who have fled from Iraq (along the western border) into Amman, Jordan.

Father Moussalli was among more than 50 regional Christian leaders who joined with Muslim scholars, who met at a conference in Amman against Western military intervention into the region.

Not surprisingly, very few - if any of the scholars gathered there saw much use in military intervention. Father Moussalli harshly criticized the West for supporting the Islamist rebels in Syria. "If we [the West] are bombing Syria now, where are all the Christians going? There are two million," he told the BBC.

Currently, there are about 2.5 million Christians in all of Syria, and an estimated 220,000 in Aleppo, of which about 10 percent have fled because of the rebel attacks, Moussalli says.

Ignatius Joseph Younan, patriarch of Antioch for the Syrian Catholic Church, added at the conference that "We stress that we reject foreign interference in Syria."

Overall, there was high condemnation for the war drums being pounded upon by the West against Syria - and elsewhere. "We don't accept any intervention by foreign powers . to protect minorities," Pope Anba Tawadros II, head of the Coptic Orthodox Church of Alexandria, in Egypt said. "It [intervention] is basically a pretext . to advance their countries' interest in the Middle East."

There are an estimated 500,000 members of the Chaldean Catholic Church in the Middle East, which is in complete unity with the Holy See in Rome under the leadership of Pope Francis. The Chaldean Catholic Church traces its origins back to Thomas the Apostle and its liturgical languages are Syriac and Aramaic, the latter the language that Jesus Christ Himself primarily spoke.

Of the estimated 2.5 million Christians in Syria, most are Eastern Orthodox followed by Eastern Catholics, which includes the Assyrian Church of the East and the Chaldean Catholic Church. Apostolic Vicar of Aleppo is optimistic about Fr Hanna, who continues his mission among Syrian Christians

Apostolic Vicar of Aleppo is optimistic about Fr Hanna, who continues his mission among Syrian Christians
Mgr Georges Abou Khazen is in contact with the Franciscan friar who was kidnapped and released in the north of the country. The latter is free to visit his community but "cannot leave Syria" before meeting with local Muslim leader.

The Whole Story of the Kidnapping of the Greek and Syriac Orthodox Metropolitans of Aleppo
Bishop Matta Khoury, secretary to Syriac Orthodox Patriarch Zakka I Iwas, spoke to al-Joumhouria on behalf of the patriarch, who had just come out of the hospital on the night of the incident. He confirmed, also in his capacity as Bishop of Bab Touma in Damascus, that the Patriarchate will not take any decision while awaiting any contact from the kidnappers, in order to know their intentions and demands.