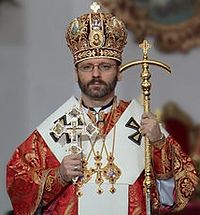 "Coordinating the Ukrainian legislation with the European, we will quickly adopt the "diseases" of the Western society,” said Archbishop Svyatoslav Shevchuk. “In the European legislation I do not see any mention of the Christian roots of the culture. We are mistaken if we think that in order to achieve the European prosperity, we should give in to these diseases."

"Among the requirements of the European Economic Community are pseudo-values. The EU is like a teenager who is testing ethical limits and is in need of a Christian education. Europe was built not upon same-sex ‘marriages’ but upon respect for human dignity, on the protection of human rights and freedoms, on honesty in politics and business. Europe came into being on precisely these fundamental things, but it has forgotten about it," said Svyatoslav Shevchuk.

"These are the very values that the Church is defending in our society today. When it comes to the protection of life from its natural beginning and till its natural end, there is reason for objecting to euthanasia, to abortions, and other actions which violate the dignity of life," concluded the Uniate Archbishop. Ukraine halts integration with EU, to develop relations with Russia "We Shouldn't Integrate with Europe as Guided and Weak Partners" - Patriarch Kirill
Patriarch Kirill of Moscow and All Russia believes that dialogue of Russia and Ukraine with the European Union should be held from positions of equal rights.
×