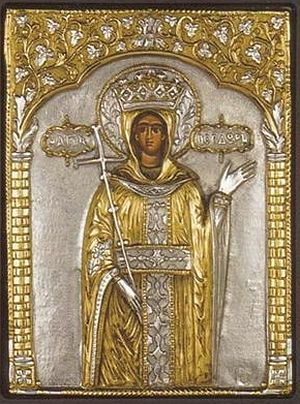 St. Theodora of Vasta.
Near the village of Vasta in the Peloponnese, there is a miraculous site that defies human logic. The lush green mountain gully with a river flowing through it is visited by many pilgrims, as well as by those curious to see how seventeen trees can grow from the thin roof of a small chapel. It all goes back to the life of a brave young girl who lived in the Byzantine Empire.

During the tenth century, when St. Theodora was born, there was a law in the Byzantine Empire that required every family to send at least one male to fight as a soldier, or pay a tax. Because St. Theodora’s family had no male children and was very poor, her father would have had to serve. St. Theodora loved her father, did not want her family to be deprived of his protection, and so she conceived the idea of offering herself instead. Dressed as a boy, she enlisted in the army as “Theodore”.

Not only was Theodore successful in keeping her secret in the ranks, she became a courageous soldier, respected for her honor and valor. However, she also drew the admiration of a young lady who fell in love with “Theodore” and told everyone that she was pregnant by him. Soldiers in those days were held to high standards, and Theodore was commanded either to marry the girl, or be condemned to death. Theodora did nothing to show her innocence, although this would obviously have been a very easy thing to do; she did not wish to reveal her secret, and bring a possible penalty upon her father.

St. Theodora had deep faith in God, and before her execution she prayed, “Let my body become a church, my blood a river, and my hair, the forest.” 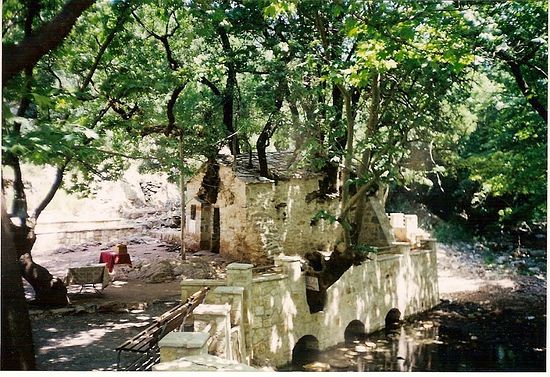 Some histories show that there was an ancient monastery on the current site of the church over St. Theodora’s grave. The three-by-two meters church dates back to sometime between the eleventh and twelfth centuries. The forested site is lush and green, with a clear river flowing under the church. Seventeen large trees—up to thirty meters tall—grow from the roof, but there are no roots to be seen, no cracks in the wall, and no damage to the roof. It may also be noted that when fires raged through the Peloponnese in 2007, scorching 370,000 acres of land and destroying ancient forests, Vasta remained untouched. The entire site with its miraculous church and river has the feeling of a living, breathing, incorrupt relic. 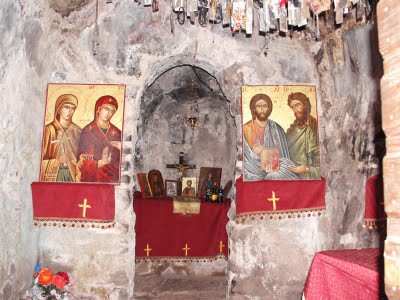 Inside the church in Vasta.
Scientific research was conducted to probe the origin of the uncanny growth, but no explanation could be found other than the power of God, which can overthrow the order of nature. The area is subject to strong winds, and as one geologist said, the weight and leverage of only one tree would have ordinarily been enough to bring the church down long ago, but there are seventeen of them!

May we all remember how God honored St. Theodora when she forsook the easy justification of her own honor in the eyes of men. St. Theodora pray to God for us! New Martyrs of Our Times—Evgeny Rodionov the Warrior 1977–1996
Hieromonk Joachim
Evgeny was held captive for three and a half months. The Chechens demanded that he remove the cross that he wore around his neck, deny his Christian faith and agree to become a Muslim to stay alive. Evgeny refused to renounce his faith. Having suffered indescribable tortures and torments, he did not betray his Orthodox faith, but confirmed it with his blood.
Comments

Advocate Meyer3/7/2019 3:35 pm
It struck me that the words of this saintly woman had great power. May my body become a Church (Temple) my hair a forest and my blood a river. The power of words are immense, and when said in a spiritual environment, your words may have immense power and you may find that you wish you could withdraw those words. I am of the opinion that even words said to another in anger, or disgust or in love or hate may carry more power than we think, even if not said in a spiritual environment. The message I carry away after seeing this, is to be very careful what I say and to whom I say it. I have removed words like 'divorce' and "hate" from my life dictionary.

Lisa Maria Trotto9/26/2013 2:23 am
I really enjoyed reading the article about St.Theodora of Vasta. She showed extraordinary bravery when she served in the army to save her father from being forced into service. When faced with false accusations from a girl who thought she was a boy her piety and bravery was remarkable, she rather go to her death than reveal her secret. The place where she lived and died is very beautiful.
×