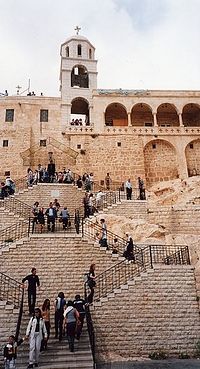 The Convent of Our Lady of Saidnaya
Islamists are continuing to attack Christian settlements in Syria. After seizure of Ma'loula the jihadist groups made an attempt to take control over Saidnaya, which is situated to the north of the Syrian capital as well, reports Sedmitza.ru.

The residents of this town are Christians. They speak Aramaic. Many Biblical events are connected with this place. According to a tradition, it was here that Cain killed his brother Abel. This place is called "the beating heart of the Syrian Christianity", Monasteries of various denominations are situated here: of the Mother of God, of Cherubim, Mar Thoma and others.

According to a report of Fides, during a conflict between unidentified armed groups trying to enter the settlement and local residents on September 27, a Greek Catholic was killed.

"Over the history of Syria we have never known such sacrilegious attacks. The Syrian people would never have taken part in them. These attacks are being made by foreigners, and that is a danger for us, Christians," noted the Melkite Patriarch Gregory III Laham.

Also, as a result of islamists' attacks on September 27, churches were damaged in Yabrud and Hassake. Four rockets that hit the Catholic church of St. George in Yabrud caused serious damage to the dome, the catechization center and the pastoral centre.

An Orthodox Church was burned down in Hassake. Islamist groups desecrated two churches in Rakka, taking off the cross and sacred images. Christians were forced to flee from Rakka, related the Syrian Orthodox priest Boulos Georg to the news agency.