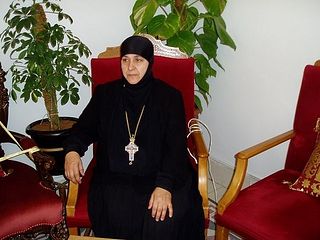 Islamist rebels have kidnapped a group of nuns from the Greek Orthodox monastery of St Thecla (Mar Taqla) in Maaloula (north of Damascus). Mgr Mario Zenari, the Vatican nuncio in Damascus, confirmed the information after speaking with the Greek-Orthodox Patriarchate. Through the Vatican diplomat, the latter “calls on all Catholics to pray for the women religious.”

“Armed men burst in the monastery of St Thecla in Maaloula this afternoon. From there, they forcibly took 12 women religious,” Mgr Zenari said, citing a statement from Patriarchate. The group of Islamist rebels has apparently taken them to Yabrud, some 80 km north of the capital. Neither the nuncio nor the church Greek Orthodox Church know reason behind the kidnapping.

Islamist Rebels from the Free Syrian Army (FSA) had invaded the small town on 5 September after driving out regime troops with the support of al-Qaeda-linked al-Nusra Brigades. After taking control of the city, they went on a rampage against Christian buildings, killing three young Catholic men.

More than 3,000 people, the town’s entire Christian population, fled their homes seeking refuge in Bab Touma, the Christian quarter of Damascus. Some found shelter with relatives in Lebanon or in local Greek-Catholic convents.

Only Muslims were left in town, plus 40 nuns at the St Thecla Monastery who stayed to help care for dozens of orphaned children.

As of yesterday, Maaloula became again the scene of heavy fighting between the army and Syrian rebels, including many members of the extremist Jabat-al-Nusra militia.

Clashes are concentrated mostly in the upper, oldest part of the town, where the St Thecla Greek-Orthodox and the Sts Sergius and Bacchus Greek-Catholic monasteries are located.

From there, the rebels have launched repeated attacks against army positions in the lower part of town.

Fighting is intensifying, sources told AsiaNews. ”The army is trying to regain control over the villages north of Damascus. For this purpose, it has launched a major offensive against the rebels, who are trying to hold government forces back through a scorched earth policy in the areas under their control.” Joint Orthodox-Catholic statement on violence against Christians in Middle East
The North American Orthodox Catholic Theological Consultation has issued a joint statement entitled “The Plight of Churches in the Middle East – Revisited.”

Syrian extremist ideologist smashes statue of the Virgin Mary in front of a camera
On October 23, user Abdulkarim Abdullah uploaded to his videoblog a Youtube video of a Wahhabi "Sheikh", ideologist of one "opposition" armed group, Umar Garba to his supporters.

Maaloula: Aramaic For ‘Don’t Support The Rebels’
Rod Dreher
I’m grateful to The New York Times for highlighting the Syrian rebel attack on the ancient Christian town of Maaloula. From the NYT’s report:
×