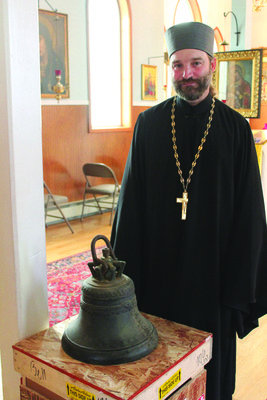 Fr. Innocent Dresdow with repatriated bell [N. Klauss photo].
A Russian Orthodox Bell has been returned to Alaska after more than 150 years in Southern California.

On October 1, 2013, Alaska Airlines graciously delivered the bell, known as the San Fernando Bell, to Holy Resurrection Orthodox Cathedral on Kodiak Island. Until recently, said bell had been under the care of the Roman Catholic Archdiocese of Los Angeles and housed at the Mission of San Fernando Rey de España. It has since been repatriated by the Catholic Church and Catholic Natives to the Native Orthodox of Alaska as a sign of friendship and unity.

In addition, the Orthodox Church is hoping to soon receive back another bell directly tied to the Kodiak Church, now held by Rancho Camulos in Piru, CA. The Camulos bell has an inscription that it was cast in Kodiak in January 1796, “by the blessing of Archimandrite Joaseph, during the sojourn of Alexander Baranov.” A formal request has been submitted to the Board of Directors of the Rancho Camulos Museum for the return of the bell to the Orthodox of Alaska in Kodiak, in keeping with the growing trend of museums throughout the world repatriating artifacts to their original home.

The San Fernando bell is 12” in both height and base diameter and is made of a bronze alloy. It has two rings of lacework adorning its topside but lacks any other inscriptions or decorations. There is a crack in the San Fernando Bell stretching from the bottom to the first band of lace, about three quarters of the way up the bell. Molten metal has been used in an attempt to fill in the crack.

Not much is known about the origin or early history of this bell. It is evident from its method of manufacture and wear, according to campanologist Mark Galperin, General Manager of Blagovest Bells in San Rafael, CA, that the bell was cast in the early to mid- 19th century and is of Russian origin. The earliest recorded sighting of the bell in Southern California is from the 1930’s writings of Marie Walsh, a campanologist. According to accounts told to her, however, the bell may have been at San Fernando as early as 1890.

An attempt was made in 1987 to loan the bell to the Orthodox Alaskans for several months in order to commemorate the Russian Orthodox millennial and the 200th anniversary of Russia’s first colony in Alaska. This effort was initiated by Bernard Wilson, then Chief of the Los Angeles International Airport Police during a brief encounter with Pope John Paul II during the Pontiff’s visit to California and by his pastor Fr. Andrew Harrison, at that time rector of St. Innocent Church. Tarzana, CA. The loan was approved by the Pope, but due to complications, the bell was never brought to Alaska.

The current repatriation is thanks to the collaboration of several individuals, including Fr. Ray Bucko, a Jesuit priest who helped orchestrate the operation; Archbishop Jose Gomez, Catholic Archbishop of Los Angeles; Archbishop Benjamin of San Francisco and the West of the Orthodox Church in America and locum tenens of the Diocese of Alaska; Fr. Alexei Smith, the head of the Interreligous and Ecumenical Affairs Office for the Los Angeles Catholic Archdiocese; Sr. Kateri Mitchell, executive director of the Tekakwitha Conference, an organization of Indigenous and Native Catholics; and Archbishop Chaput, Episcopal Moderator of the Tekakwitha Conference, along with Fr. Harrison; Mr. Galperin; Matthew Namee, a founder of the Society for Orthodox Christian History in the Americas; Fr. Yousuf Rassam, current pastor of St. Innocent Church; and Clifford Argue, a retired Alaska Airlines executive.

The actual transfer of the bell from Native Catholics to Native Orthodox occurred on July 21, 2013, at the Tekakwitha Conference’s annual meeting in Texas. The official “receiving” of the San Fernando Bell by Holy Resurrection Cathedral is scheduled to take place on October 19, 2013. Archbishop Benjamin will preside, assisted by Fr. Innocent Dresdow, dean of the cathedral, and numerous Native Alaska Orthodox clergy. A formal blessing and installation of the bell will be held at a later date in Kodiak.

“The Orthodox Christians of Alaska, especially the many Native clergy and laity, are most grateful to our Roman Catholic Native American brothers through Archbishop Gomez, the tireless work of Fr. Bucko, and others, for the return of this piece of our religious and cultural history,” noted Archbishop Benjamin. “We now look forward to a positive response from the directors of Rancho Camulos for the return of the companion bell they have at their museum.”

In a gesture of friendship and appreciation, Archbishop Benjamin presened to Archbishop Gomez for the San Fernando Mission a 14-inch Russian bronze replacement bell, which was cast as a gift from Fr. Harrison, now pastor of St. Luke Church, Palos Hills, IL, and parishioners. Kodiak, Fairbanks to host missionary events
Priest Luke Veronis, an Orthodox missionary associated for many years with the Orthodox Christian Mission Center, will be a guest lecturer throughout the second week of March 2012 at Saint Herman’s Seminary. Bells may ring out again in Sitka cathedral

Bells may ring out again in Sitka cathedral
An effort is under way to bring traditional Russian Orthodox bell-ringing back to St. Michael's Cathedral after more than 40 years.
Comments
×