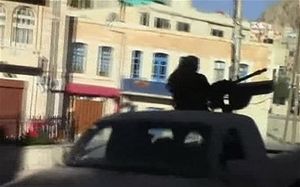 Humanitarian aid has been twice given to the nuns and children who took shelter from militants in the Syrian Orthodox Convent of St. Thecla and remained without food and water, a representative of the Orthodox Church of Antioch, Bishop Isaac of Aramaya (Barakat), stated on Thursday, according to a report by RIA Novosti.

Late in September, the France Presse agency reported that around 40 nuns and orphaned children were still shut in the convent of St. Thecla in the town of Ma'loula, which was under siege by the militants. According to the information of Syrian military sources, anyone who approaches the convent are fired upon by snipers. It also was reported that the generator in the convent was not in good working order and the water supply was stopped.

"They have no electricity, no water and no food... We managed to send aid to the convent twice," said Bishop Isaac to the journalists.

According to him, it became possible to give necessary food to the convent owing to the support of Patriarch John X and the Syrian army. The Bishop has also added that last Sunday, the militants attacked the Holy Cross Church in Damascus where Barakat serves as the rector as well as the Greek-Catholic Church of the Mother of God. "Eight people were killed and 20 were wounded," added the representative of the Patriarchate of Antioch.

Aid to residents of Ma'loula is being now sent from Moscow as well. On September 29, the Imperial Orthodox Palestine Society delivered humanitarian aid weighing about 1.5 tons to Damascus. Attempt are being made to bring part of this aid to Ma'loula—food and medicaments, as well as gifts for the children gathered by the wards of the orphanage at the Vyksa Iveron Convent in the Nizhny Novgorod region, reports ITAR-TASS. Maaloula: Aramaic For ‘Don’t Support The Rebels’
Rod Dreher
I’m grateful to The New York Times for highlighting the Syrian rebel attack on the ancient Christian town of Maaloula. From the NYT’s report:
×