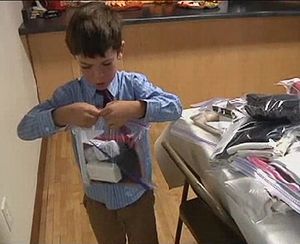 The Syrian Civil war, which has been ongoing for roughly two and a half years, has claimed the lives of more than 100-thousand people.

The United Nations estimates the continued tensions between the government and rebel forces will have displaced 3.5-million people by the end of 2013.

Kids at La Crosse's St. Elias Orthodox Church are seeking to help the refugees displaced by the conflict.

The kids took up the challenge of assembling the care packages after being made aware by the International Orthodox Christian Charities that many Syrian refugees lack basic, hygienic supplies like towels or toothbrushes.

The hygiene kits, packaged in plastic bags, contain both -- as well as washcloths, nail clippers, soap, combs and Band-Aids.

This week, they will mail roughly 50 hygiene packages to Syria.

"It's just a humanitarian project," Kalas said. "For us, it's a Christian project. But these packages won't necessarily go to other people who are Christians, and that's fine."

"They just go to people in need," she said. IOCC Assists Syrian Christians Traumatized in Deadly Attack
Fleeing for their lives, more than 2,400 exhausted and traumatized Christians from northeastern Syria sought refuge in the towns of Hasakah and Qamishli after their small communities were terrorized this week. Syria's Assyrian Christians Find Refuge With Turkish Neighbours
Turkey is home to nearly 600,000 registered Syrian refugees with hundreds of thousands more living in the country without registering with the authorities. Nearly 500 Syrian refugees granted asylum in Moscow
The stream of refugees from Syria who hope to receive asylum in Russia is growing.
Comments

I'm interested in doing a similar volunteer project to send to Syrian Refugees as well! Is there anyway you could let me know how and where you sent the items to specifically in Syria? My main problem is finding a way to get the care packages my community makes to the refugees.