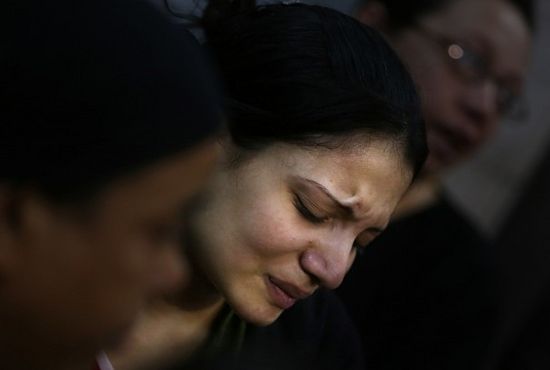 The persecution of any religious minority anywhere by anyone is an evil injustice. It requires all persons of conscience to speak out and, when possible, take action.

The upcoming 75th anniversary of Kristallnacht makes this an auspicious time to raise awareness about the contemporary violence targeting religious minorities and their places of worship. Of particular concern are attacks against Christian minorities that have occurred with alarming frequency from Syria to Egypt, from Iraq to Pakistan, and from Kenya to Sudan.

November 9 marks 75 years since the pogrom against Jews committed by mobs throughout the Nazi Reich. Often called Kristallnacht, or the “Night of Broken Glass,” when rioters killed or injured hundreds of Jews; burned over 1,000 synagogues; destroyed 7,000 Jewish-owned shops and businesses; vandalized cemeteries and schools, and; sent 30,000 Jews to German concentration camps. It marked a turning point in the escalating campaign of persecution culminating in the Holocaust.

These events, seared into Jewish collective memory, make us doubly aware—and duty bound—to raise our voices when the deadly brew of religious bigotry and wanton violence are mixed.

Today in Syria, a once thriving Christian population—a community nearly as ancient as that country’s once great Jewish community—has been depopulated by 25 percent,according an estimate the Patriarch Melkite Greek Catholic Patriarch Gregorios III Laham shared with the BBC.

In September, The Associated Press reported that Syrian Christians in Maaloula—a community dating to the birth of Christianity and that still speaks Aramaic—were driven out or forcibly converted to Islam by rebels aligned with al-Qaeda.

“It is chaos, it is violence, it is blood, it is death. Life has been paralyzed. We have lost everything,” said Archbishop Theophile Georges Kassab of Homs.

In Egypt, some supporters of ousted President Mohammed Morsi last summer unleashed their rage against that nation’s Christians, a historic community constituting 20 percent of the country’s population. Mobs burned dozens of Christian schools, convents, monasteries, institutions, and churches of any, and all Christian denominations. And just days ago, gunmen on a motorcycle opened fire outside a Coptic Christian church during a wedding, murdering four, including an 8-year-old girl.

“It never happened before in history that such a big number of churches were attacked on one day,” Bishop Thomas, a Coptic Orthodox bishop in Assiut told Al Jazeera. “We normally used to have attacks once a month or so.”

As Kristallnacht teaches, the burning of houses of worship can be a red alert that worse is yet to come. September saw the horrific Taliban bombing of Anglican worshippers in Pakistan, which took 85 lives, and, according to accounts shared by witnesses, the targeting for murder of Kenyan Christians—deliberately separated from others in a chilling reminder of Nazi “selections”—by al Shabaab terrorists in a Nairobi shopping mall.

Attacks like these have contributed to a decline in the Christian population in the Middle East and North Africa from 9.5 percent to 3.8 percent of the total population from 1910 to 2010, according to a Pew Forum report on Global Christianity.

Tellingly, Israel is the only Middle East country where the Christian population has grown in the last half century, from 34,000 to 158,000, in large measure, according to many observers, because of the religious freedoms enjoyed there.

As a Jew, I’m proud of the status of religious minorities in the Jewish state. As an American, I’m especially proud to live in a society where people of different faiths (and no faith) share the values of tolerance and coexistence. Despite isolated though sometimes deadly instances of religiously-inspired terror during the past few decades, ours is a nation where no Christian, Jew, Muslim, Hindu, Buddhist, Sikh, or person of any other faith must live in fear because of who they are.

It is time to sound the alarm about the religious persecutions of Christians and others. Let us raise our voices, and call on our elected representatives to take action. People of all faiths should support passage of H.R.301, legislation that would direct our President to appoint a State Department Special Envoy to Promote Religious Freedom of Religious Minorities in the Near East and South Central Asia.

Further, we must demand that international institutions designed to protect human rights, especially the United Nations, must actually do so without prejudice. O’ empty town of Bethlehem: a trickle of visits to the site of Christ’s birth thanks to intifadas and ongoing tensions

O’ empty town of Bethlehem: a trickle of visits to the site of Christ’s birth thanks to intifadas and ongoing tensions
Vera Baboun, Bethlehem’s first female mayor, wants to make her city open to all, especially to Christian pilgrims – and those Palestinians who have left. St. Nicholas Parishioners Revisit Ground Zero Memories
On the sunny, beautiful morning of Sept. 11, 2001, John Costalas served a lot of breakfasts at his popular Essex House restaurant, where customers came early. Ten of them never came back, Port Authority workers who died in the terrorist attacks at the World Trade Center a short while later. “They had breakfast here. Seven o’clock in the morning,” he said, pointing to their pictures on the wall where his eatery’s walls are a shrine of former customers who’ve passed away.
Comments
×