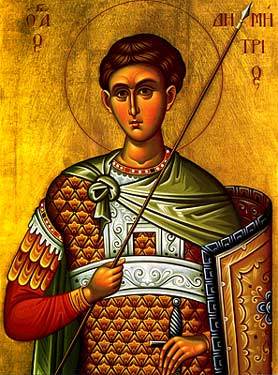 A martyr is not one who chooses to die; rather, it is when one involuntarily - but without hesitation - suffers torment at the hands of others because of a public declaration or confession of faith, that they genuinely receive the crown of martyrdom.

A simple scan of the Synaxarion (a book on the lives of the saints) uncovers countless Orthodox Christian martyrs, or witnesses to the faith, celebrated throughout the year.

On October 26, for example, one of the most notable of these saints, the Holy Great Martyr Demetrios the Myrrh-streamer, is honoured.

But who exactly is St. Demetrios and why is celebrating him and other saints so important?

For among martyrs he is as a great luminary among stars, holding forth the word of eternal life (Phil. 2:16)... From childhood he was all these things at once: a solid, immovable pillar of goodness, a breathing, moving image of every virtue; the shrine of divine and human graces, representing them all; a living book telling of glory and leading us to better things.

Born in the 3rd century in Thessalonica, Demetrios was the only son of distinguished and pious parents. Following in his father's footsteps, he joined the military and because of his many virtues was appointed commander of the Roman forces in Thessaly and Proconsul for Hellas.

When the Emperor Maximian, however, began persecuting Christians, the Saint openly acknowledged his Christian Faith and courageously confessed his love for Christ. For this, he was thrown into prison but not before Demetrios distributed all of his goods to the poor through his servant Lupus.

In continuous prayer, St. Demetrios was initially saved from death, helping many non-believers embrace Christianity. Gregory Palamas describes how Demetrios "struggled with evil to the point of shedding his last drop of blood;" beheaded c. 306, Demetrios appears to this day both in dreams and openly to those who invoke his holy name.

When one is wounded by love for the Lord, similar to St. Demetrios and all martyrs throughout history, it is easy to discard worldly possessions for the unfading glory in heaven.

The celebration of saints though is more than just a simple collection of individuals, it is the unbroken link of faith, works and love (a "golden chain," Symeon the New Theologian described it) in God.

Saints serve as a living testimony to Christ, He who has many witnesses like the prophets of old, from Moses and John the Forerunner, to the present day. If these holy people and their memory were to be forgotten, it would be akin to rejecting their sacrifice for Christianity.

Orthodox Christians revere saints, including venerating icons, because they serve as a constant reminder that like God, the Church is eternal, without beginning nor end.

As one of the greatest martyrs in all of Christendom, today we continue the more than 1,700-year-old tradition of celebrating St. Demetrios, who by the shining example of his life, gives hope to all those in afflictions and difficulties, such as those courageous Christians inEgypt, Syria and Pakistan who under difficult - and deadly - circumstances continue to confess their faith in Christ.

The celebrations are especially festive in Thessaloniki, Greece, where the Saint's wonderworking relics can be found; as its Protector, the Saint has protected inhabitants there from attacks and preserved them from plague and famine.

As St. Gregory (a fellow Thessalonian) wrote about the Great Martyr, may we be "deemed worthy of his intercessions to God, and of the eternal celebrations of the citizens of heaven." Festival tours offer chance to explore art and history in Greek Orthodox church
The interior of an Orthodox church makes it clear that this is a place of worship, a place of beauty and joy, the house of God. An example of this is St. Demetrios Greek Orthodox Church, which will be open to the public for guided tours during the annual Greek Festival next week.
Comments
×