The Rich Man and Lazarus: the Bosom of Abraham 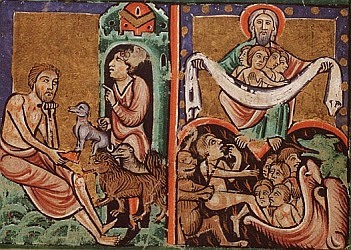 "And it came to pass, that the beggar died, and was carried by the angels into Abraham's bosom: the rich man also died, and was buried" (Luke 16:22)

Why into Abraham's bosom? Comment on the different way in which the rich man and Lazarus ended their days. There is a great significance in these terse words!

Our Holy Father Abraham, among his numerous virtues, was distinguished in the minds of the Jews for his hospitality. This is also associated with salvation.

"It may here be observed, that all who are offended by us are exposed to our view. But the rich man sees Lazarus not with any other righteous man, but in Abraham's bosom. For Abraham was full of love, but the man is convicted of cruelty. Abraham sitting before his door followed after those that passed by, and brought them into his house, the other turned away even them that abode within his gate." (St John Chrysostom)

To the world, the death of Lazarus, was a non-event. Someone had to grab him, because after all, he would start to smell, and throw him somewhere, into some potter's field. No one came to pray for him. No one cared. No one knew him. The rich man might have noticed after two or three weeks, "Oh the beggar is not there anymore. I don't have to step over him anymore. That's good". His death was of no consequence. It did not cause a ripple in the life of that time.

But he did NOT die alone, and his death was a matter of great rejoicing in the heavens, because the angels escorted him into Abraham's bosom. What does it say about those that die who are righteous, and the appearances, both in this world , and the REAL appearances in the next? Solomon says, "But the souls of the righteous are in the hand of God, and there shall no torment touch them. In the sight of the unwise they seemed to die: and their departure is taken for misery, And their going from us to be utter destruction: but they are in peace. For though they be punished in the sight of men, yet is their hope full of immortality. And having been a little chastised" ... Lazarus' wounds were a little bit of chastisement mind you. Don't look at the appearances, look at the truth! And "they shall be greatly rewarded: for God proved them, and found them worthy for himself. As gold in the furnace hath he tried them, and received them as a burnt offering. And in the time of their visitation they shall shine, and run to and fro like sparks among the stubble." (Wisdom 3:1 - 7) So it is with the righteous when they die. The world sees a false picture, but we know the truth.

The rich man's death, although accompanied by great fanfare in the world, with paid mourners, and the playing of flutes, was an unimportant event in the heavens. He was merely buried. This burial, in the bowels of the earth, is meant here to signify that he descending into the lowest depths of Hell.

"He (the rich man, Ed.) died then indeed in body, but his soul was dead before. For he did none of the works of the soul. All that warmth which issues from the love of our neighbor had fled, and he was more dead than his body. But no one is spoken of as having ministered to the rich man's burial as to that of Lazarus. Because when he lived pleasantly in the broad road, he had many busy flatterers; when he came to his end, all forsook him. For it simply follows, and was buried in hell. But his soul also when living was buried, enshrined in its body as it were in a tomb." (St John Chrysostom) Met. Ephrem on the Rich Man and Lazarus
Metropolitan Ephrem (Kyriakos)
One might wonder what that rich man did to go to torment. Did he do something evil to Lazarus? He did not harm Lazarus and did not do or say anything to him. So what is the mistake that the rich man made? The Mystery and the Process of Death
Met. Hierotheos Vlachos

The Mystery and the Process of Death
Met. Hierotheos Vlachos
So, when I see people holding a lit candle and chanting “Christ is Risen” on the night of the Resurrection of Christ, I understand better that we should regard death as a process of passing from the “land of Egypt” to the “land of Promise”, from death to life, which takes place in Christ, and as a hope for our resurrection which again takes place in Christ. It would be very fortunate if we were to anticipate death in this position, holding the candle of the Resurrection and chanting “Christ is Risen”.
Comments

damjan11/6/2022 11:29 pm
For more great articles of Rev. Seraphim go to orthodox.net and you will not be disappointed.

maria Castillo2/2/2014 10:15 am
This article is of more clarity as to the meaning of Abraham Bosom,s and heaven. It seem that the concept of Lazarus been taken by the Angels to Abraham Bosom's is the same as Lazarus spirit went to out Heavenly Father. While being spiritually death means being separated from God, living in sin and forgetting to do those things that God have ask us to do. Including having faith and works of good deeds. When you mention being death spiritually before the physical it is worthy to say that if we do not receive Jesus as our Lord and Savior and follow His steps living according to His will. which in that case maybe it is the we should give up to our free wills and follow Jesus by dying to our self an let Jesus be in our lives and renew our thinking. So we will go back to our Spirit will return to God our Father that gave it to us.