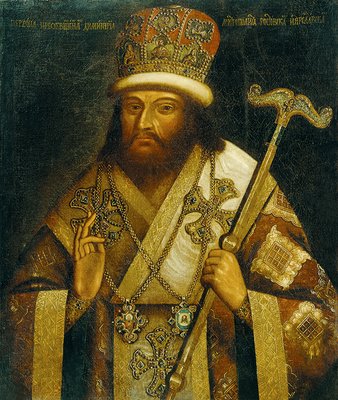 Holy Hierarch St. Dimitry was born in 1651 in the settlement of Makarov, within the confines of Kiev. At his Baptism, he was given the name Daniel. His father Savva, also known as Tuptalo, was a regimental centurion [i.e. lieutenant]. Daniel enrolled in a school in Kiev, and from his early youth manifested great zeal dedication to prayer and study, preferring reading books and listening to pious conversations, over playing noisy games with his companions. Over the years, this only intensified, and at the age of 17, with his father’s blessing, he entered monastic life at the St. Kirill Monastery. There, as he became ever more resolute in faith and piety, Dimitry (the name he was given at his tonsure), also assiduously continued with his studies, and learned a number of languages. Possessing God-given intellect and talents, he used the gifts given him by the Lord for good, and like the faithful servant spoken of in the Gospels, he multiplied the talent entrusted to him, using it in the service of God and for the benefit of his neighbor. He preached the Word of God in Kiev, Chernigov, and in various monasteries, was an abbot at the Maksakov and later the Baturin Monasteries. His sermons attracted a multitude of listeners, and buttressed Orthodoxy in regions where close and frequent interaction between the local populace and the neighboring Papists had caused it to waver somewhat.

Soon Dimitry was called to perform a different labor. There was a need to assemble a collection of the Lives of the Saints. Metropolitan Makary had long since begun the task of collecting the Lives of Saints from various sources and assembling them in his great volumes of the Menaion. Later, Metropolitan Peter Mogila of Kiev expressed the desire to publish them in language more accessible to all. However, he died before he could accomplish his goal. Now the Metropolitan of Kiev was looking for someone to whom he could entrust that task. He settled on Dimitry, who was already renowned for his piety, erudition, and industriousness. Dimitry began this useful work while he was abbot of the Baturin Monastery, and gradually worked on it over the course of 20 years – as Archimandrite in Chernigov and in Novgorod of the North, and then as Metropolitan of Rostov. In that Menaion, he assembled the lives of the Saints for each day of the year, a task for which we owe him a profound debt of gratitude.

Meanwhile, Peter, the reigning Emperor of Russia appointed Dimitry to be Metropolitan of Siberia and Tobolsk. However, the Hierarch’s poor state of health, as well as the task he had undertaken, prevented him from setting out on the long journey to Siberia. Accordingly, he was reassigned, to be Metropolitan of Rostov and Yaroslavl. Remembering the Savior’s statement that of one to whom much is given, much will be required, Dimitry in his new exalted rank, he worked even more assiduously to care unstintingly for those entrusted to his care. He used his own funds to build a school in Rostov, oversaw the class work, and when his complex schedule of activities permitted., often taught there himself. He tirelessly strove to explain Christ’s teaching through lectures and homilies, and set a good example by his temperate, God-fearing, and honest way of life. A person who was kind, compassionate, and accessible to all, he helped his neighbor by all means possible. He would eagerly impart advice and instruction, would visit the sick, and would be generous with gifts of food and clothing to the needy, keeping almost nothing for himself. Thus, at his death, he left nothing but his holy books.

The endless activity imposed on St. Dimitry with his new rank did not prevent him from zealously continuing the work of the Menaion; moreover, he also wrote many religious books, prayers, and liturgical hymns. His new position demanded ever greater efforts on his part. Around this time, out of sketes in Kostroma, Nizhegorod and the forests of Bryansk, schismatics began to disseminate erroneous interpretations of the Word of God, and with their false teachings brought confusion to those who were not firmly established in the Faith and in the Law of God. Dimitry presented convincing arguments in his sermons in opposition to their unjust and incorrect teaching; he also criticized them in writing, and pointed out what constituted the truth. His most remarkable composition in opposition to the schism was his “Investigation into the Bryansk faith."

On account of those spiritual labors, the Holy Church glorifies him, calling him a zealot for Orthodoxy, rooter-out of schism, the Russian star that shone forth from Kiev and shone through Novgorod of the North, came to Rostov: a man of golden oratory, a teacher who through his teachings and miracles enlightened the entire land. Death came to the Holy Hierarch at an early age. In his 58th year he fell ill and, although the illness did not appear to be serious, and did not worry anyone else, he sensed that his end was near. On the eve of his death, he called together his choir, and attentively listened as they sang his own composition, “I place my hope in God, Thou my God, Jesus, Thou art my joy.” He dismissed all but one of the chanters – who had assisted him in transcribing his compositions. For a long time, he talked to him about life, and about the responsibilities attendant to being a Christian. Then he dismissed him as well. Escorting him to the door, St. Dimitry bowed low before him, and thanked him for all of his service. The chanter said, “Holy master, [why] are you making such a profoundly deep prostration before me, the least of servants? The Metropolitan again made a prostration, and repeated, “I thank you.” Then he knelt in prayer. The chanter returned home with a sense of mournful premonition. Early in the morning, the tolling of the bell announced the passing of the Holy Hierarch who was found dead, still kneeling in prayer. This occurred in Rostov in 1709.

Years later, the Holy Hierarch’s honorable relics and his vestments were found to be incorrupt, and in 1763, at the direction of Empress Catherine, were transferred to a silver reliquary. Since that time, a multitude of faithful have come from all over Russia to Rostov in order to bow down before the relics of the great Holy Hierarch. Menaion of St. Dimitry of Rostov translated into Georgian for the first time The Place of Lives of Saints in the Spiritual Life